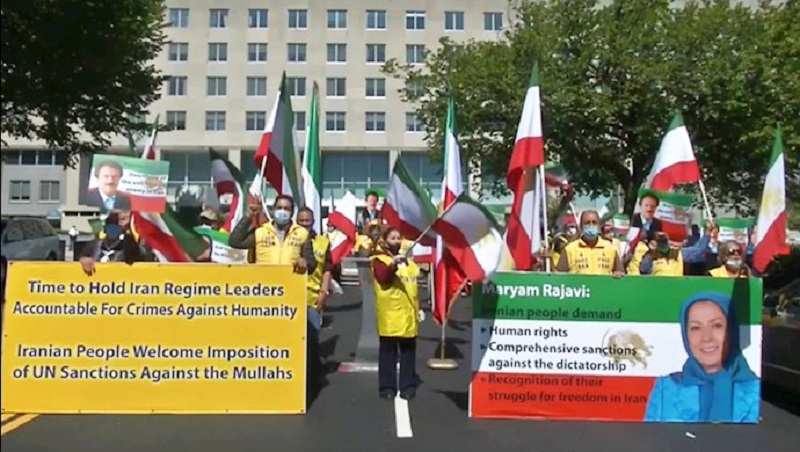 Iranians, supporters of the People’s Mojahedin Organization of Iran (PMOI/MEK), held a rally in front of the White House on Tuesday supporting sanctions on the mullahs’ regime. They also urged the international community to hold the Iranian regime to account for its crimes against humanity. They once again reiterated that the international community’s failure in holding the mullahs to account for the 1988 massacre of 30,000 Iranian political prisoners has emboldened the regime to continue its human rights violations, particularly killing 1500 protesters during the nationwide Iran protests in November 2019 and executing wrestling champion Navid Afkari.

MEK supporters and members of the Iranian diaspora held the rally simultaneous with the UN General Assembly annual speeches.

Iranians at this rally reiterated that the mullahs’ regime only understands the language of firmness and appeasing this medieval and terrorist regime will only increase the Iranian people’s suffering and the spread of terrorism across the globe.

Participants of this rally also expressed their support for the ten-points plan of Mrs. Maryam Rajavi, the president-elect of the National Council of Resistance of Iran (NCRI), for the future of Iran. They also held a banner which read: “Time to hold Iran regime leaders’ accountable for crimes against humanity. Iranian people welcome imposition of UN sanctions against the mullahs.” They also chanted slogans in solidarity with their risen compatriots inside Iran and echoed their desire for regime change and establishment of a free and democratic Iran.

MEK and NCRI supporters, as well as the members of the Iranian communities in Europe, held similar rallies within the last few days in different European cities. These demonstrations were held in Cologne and Stuttgart in Germany, Stockholm, Gutenberg, and Malmo in Sweden, Rome in Italy and Luxembourg. They called on the European governments to stop appeasing the mullahs’ regime, close the Iranian regime’s embassies and expel their agents from their soil. They also condemned Navid Afkari’s execution and expressed solidarity with their compatriots inside Iran.

In a similar development, over 300 Iranian communities in Europe, the United States, Australia, and Canada in a statement reiterated that the only way to deal with the Iranian regime’s threats is to support the Iranian people’s desire for freedom and democracy.

“During the uprisings of 2017, as well as in November 2019 and January 2020, the Iranian people expressed their desire to overthrow the regime with the slogans ‘Death to Khamenei, Rouhani,’ ‘Reformist, principlist, the game is over,’ and ‘Death to the oppressor, be it the Shah or the leader,’” read the statement.

“The Iranian people need jobs, housing and a minimum standard of living, which have been denied from them during 42 years of corrupt and plundering dictatorship. The IRGC’s hundreds of billions of assets are wholly belongs to the people and must be used to improve the economic situation and to fight the coronavirus that is massacring the people,” they added, calling for the disband of the regime’s Revolutionary Guards (IRGC).

“The notion that sanctions target the people is demagogic,” the signatories wrote, adding that Iran’s oil revenues “are spent entirely on repression and incitement to war, or are plundered by the regime’s leaders. Every bullet sold to the regime is used against the Iranian people and against peace in the region. The ultimate solution to the Iranian crisis is the overthrow of the clerical regime by the Iranian people and the Iranian resistance.” They added that all the regime’s embassies in Europe which are “centers of terrorist acts” should be closed and the mullahs’ agents should be expelled.