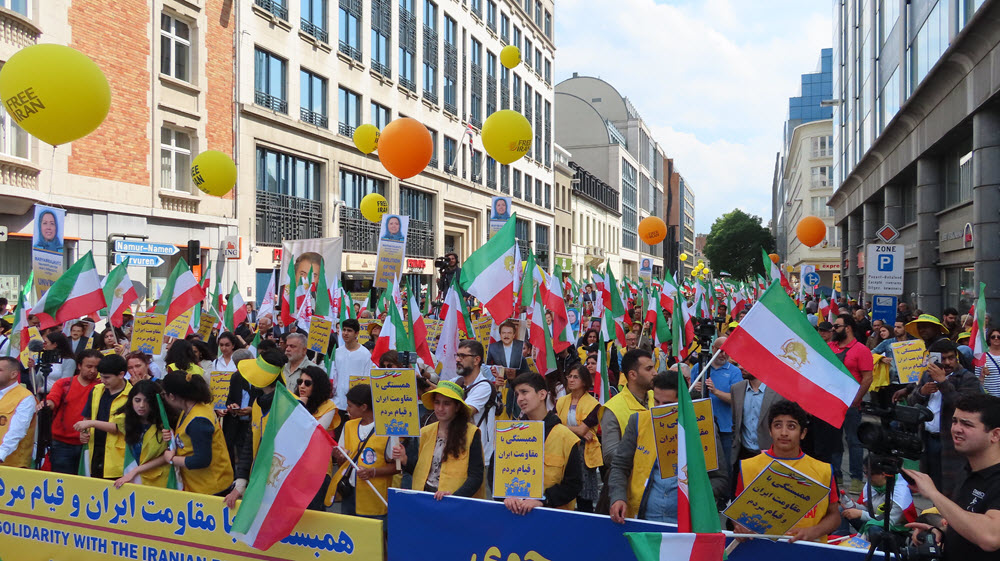 With Iran in the news daily as tensions increase in the Persian Gulf over multiple tanker attacks, the Iranian resistance is raising the profile of their movement against the regime in Western capitals in Europe and the U.S, The Washington Times wrote on Wednesday, June 19.

It added: “According to the organizers, the march in Brussels was the first of a series of Iranian marches around the world. The next is scheduled to be held in Washington, D.C., on June 21. This is the first time that the Iranian opposition has organized a wave of major protests in major Western capitals.”

“Various dignitaries addressed the crowd, including members of the European and Belgian parliaments,” it said, adding that Maryam Rajavi, the president-elect of the Iranian resistance, addressed the event via video message and reminded the Europeans that Iran twice in the last year was caught red-handed planning deadly terrorist attacks. Those arrested in the plots in Paris and Albania included Iranian diplomats.

She called on European governments to follow the lead of the United States and impose sanctions on the regime of the mullahs, as well as designate the IRGC as a terrorist organization.

According to Shahin Gobadi of the National Council of Resistance of Iran, “this is the first time that a series of protests with such dimensions is continuously organized by the Iranian Resistance and its supporters in the West.”

“These protests are being held while the Iranian regime faces an explosive society that wants its downfall, and while the regime grapples with a nationwide resistance led by the People’s Mujahideen Organization of Iran (PMOI or MEK), inside Iran. And unlike the past, there are no signs of the appeasement policy in the U.S. to help the regime at this critical juncture. These crises have brought the regime’s internal conflicts to their highest levels, between Rouhani and Khamenei. All these indicate the regime is in its final phase. The series of marches by Iranians in different countries is a crucial answer to this situation.”

The protesters in Brussels called the appeasement policy of the European Union in regards to Iran “shameful” and “without legitimacy,” according to the analysis-opinion piece by The Washington Times’ columnist L. Todd Wood.

The Trump administration is actively working to starve the regime in Iran financially in order to force a change in behavior. European governments have actively worked to flout these new sanctions, the article added.

Previous article
IRAN: Retirees in Tehran Protest in Front of the Parliament
Next article
Iranian Political Prisoner Commits Suicide in Protest to Torture