Written by The Editorial Board
17th September 2019 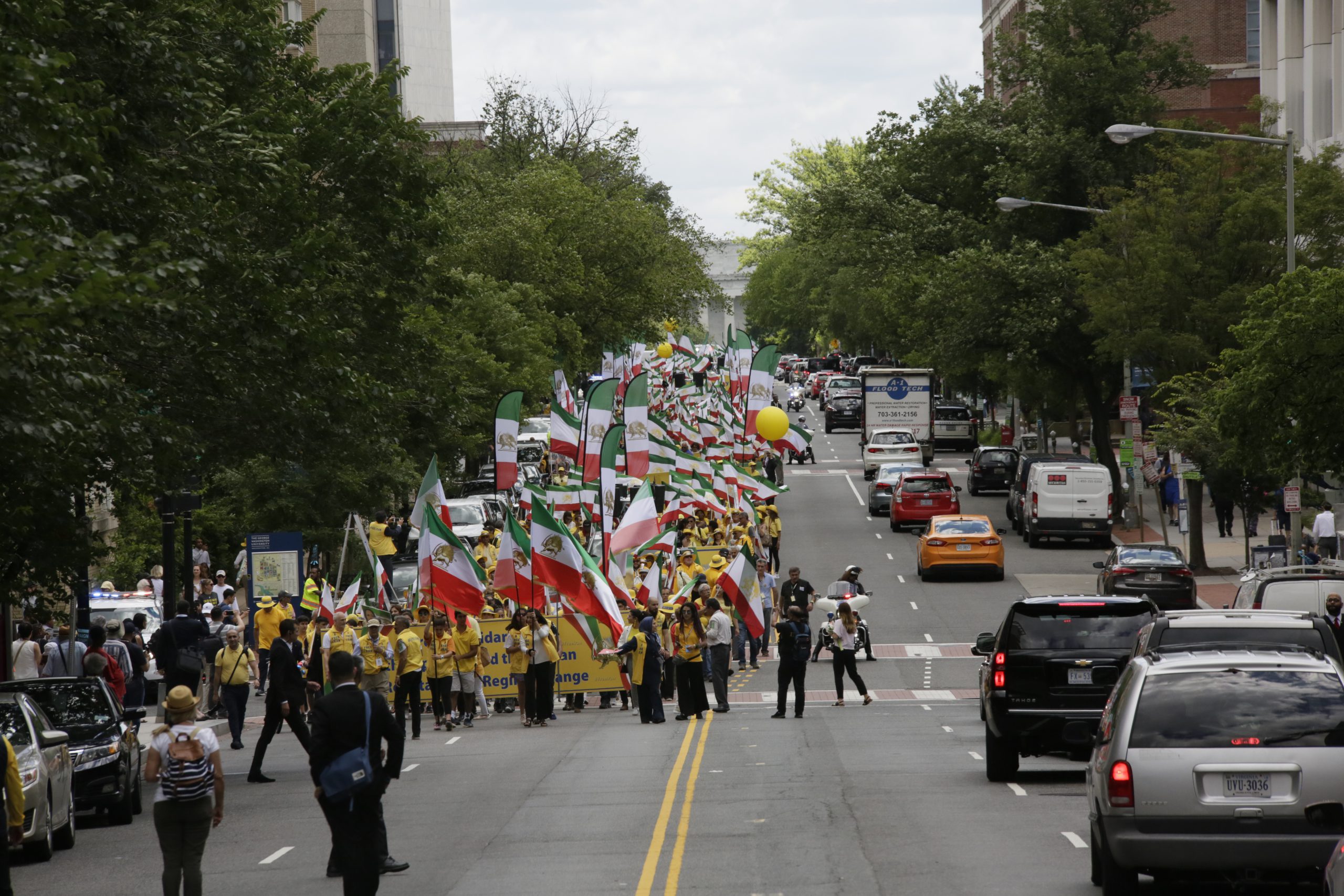 The striking similarity in the reaction from Tehran and the pro-appeasement crowd inside the Beltway over recent changes in the White House is not a coincidence. They all have two things in common: First, opposition to a firm policy vis-à-vis the world’s most active state sponsor of terror and the leading per capita executioner of its own citizens. Second, attacking the democratic opposition, to justify their support for the terrorist regime ruling Iran.

Jason Rezaian, in his Sept. 10 Global Opinions column asserted, “The shake-up creates the first real opportunity for Trump to pursue a policy of engaging Iran.” His optimism, however, is misplaced and premature. The departure from the Obama administration’s policy of appeasement began when the new administration took office.

Moreover, a cursory review of the MEK’s history shows that it has survived and flourished for 54 years, not because of having a voice in the White House but because of its reliance solely on the Iranian people and because it has been willing to pay the price for democracy in blood and treasure. As many as 30,000 members of the MEK, who while in prison remained steadfast in their ideals, were massacred just in summer 1988 by the Iranian regime based on a fatwa issued by the regime’s leader, Ruhollah Khomeini. Rezaian’s obvious incapacity to understand such an iron-clad commitment has led him to parrot Tehran’s characterization of the MEK as being “cult-like.”

How does Rezaian know of the true level of support that the MEK enjoys inside Iran under a totalitarian state? What is his measure of sufficient evidence for the MEK’s popularity in a society as complex and repressed as Iran? And how did he conclude that the MEK is reviled by Iranians in a country of over 80 million!? Who are his sources? The Iranian regime and its lobby in the west who want to insinuate that there is no viable alternative to the ruling theocracy and therefore, it must be engaged.

Rezaian is hardly in a position to provide an objective assessment of the MEK’s popularity in Iran. His previous reporting giving a measure of legitimacy to the vicious paramilitary and suppressive Basij force undercut his credibility. “These were members of the Basij, the youth militia — young men in their 20s who are the new generation of the Islamic revolution. Their group has years of organizing experience and, if needed, weapons. … One might have expected the Basij to react harshly [to demonstrations], but they mostly just smiled, mirroring the current demeanor of their man [Ahmadinejad],” he wrote in 2009. A few days after the publication of this “objective observation” which referred to the Basij’s suppressive experience as “organizing experience,” human rights organizations published many reports on harsh crackdown on peaceful protests by the authorities, including deadly attacks by security forces and the Basij militia, mass arrests, and the torture of detainees. And we all remember that Neda Agha Soltan, who became the icon of the June 2009 uprising, was shot and killed in broad daylight by the sniper fire of one of those Basiji militiamen, with whom Rezaian was quite comfortably intermingling in the back of a pick-up truck 11 or 12 days earlier.

Just as Rezaian’s sympathetic description of the Basij doesn’t fit into the mold of the most basic facts and realities, the same could be said about his inexplicable hostility towards the MEK, matched in intensity only by the Iranian regime.

A few days after the 2018 uprising engulfed 160 cities in Iran, the regime’s President Hassan Rouhani called his French counterpart, blaming the MEK for the protests and pleaded with him to restrict the movement in France. He was followed by the Supreme Leader Ali Khamenei who said the MEK was the internal factor in fomenting the uprising. And ever since, not a day goes by without a senior official expressing paranoia over the rapid and growing appeal of the MEK among the Iranian people, especially women and youths, and even younger clerics.  More recently, In April 2019, the intelligence minister admitted the regime had arrested 116 MEK-affiliated teams. Dozens more, according to intelligence officials, were detained in East Azerbaijan province. All this presents a more realistic assessment of the level of the MEK’s support inside the country.

Rezaian’s absurd claim that MEK “can claim no popular support” loses muster in the face of the facts on the ground. Outside Iran, where Iranians can express their views without the fear of being persecuted, tens of thousands of MEK supporters held major rallies in five major European capitals, Paris, Brussels, Berlin, Stockholm, London and in Washington, DC to call for regime change. Indeed, the three-hour-long rally and march from the State Department to the White House, not only snarled traffic in the nation’s capital for several hours, it also caught the attention of the mainstream media, save for the Post. Even the White House noticed the elaborate and well-organized rally. “What we want to do is stand with the Iranian people, thousands of whom gathered outside the White House on Friday, and tens of thousands of which, took to the streets last year in communities across Iran, we want to stand with them” Vice President Mike Pence told CBS’s Face the Nation on June 23, 2019.

As for regime change, the Iranian Resistance has repeatedly stressed that the task of overthrowing the medieval theocracy ruling Iran rests not with foreign powers but with the Iranian people and organized resistance movement. Indeed, MEK’s resistance units have been quite busy and expanding their activities in various cities and towns to make that happen. Ironically, “those millions of Iranians who prefer a regime change” have been following the MEK’s lead and repeating its slogans, such as “hardliner, reformer, the game is now over,” “leave Syria alone, think of us,” and “down with Khamenei, down with Rouhani.”

Rezaian has also made the threadbare claim that former American officials have been paid by the MEK to advocate for the group. Nothing is further from the truth. The MEK has not paid any former U.S. officials. In 2012, the Treasury Department launched an investigation into Iranian-American citizens who, in exercising their first amendment rights, had organized different conferences and seminars in which former U.S. officials spoke. After more than a year of investigation, the Department sent letters to the communities, informing them that it had completed its review of the case and that no laws had been violated. The pro-Iranian regime lobby in Washington failed to silence those who spoke in favor of a firm policy against the Iranian regime.

The 1997 designation of the MEK was an act of political expediency by the Clinton administration. It was, as Los Angeles Times quoted Martin Indyk, Assistant Secretary of State at the time, as saying, “a goodwill gesture to the newly elected president Mohammad Khatami.” State Department officials reiterated that fact also in 1999 and in 2002 when Indyk was quoted as saying the following in Newsweek about the designation of the MEK: “…[there] was White House interest in opening up a dialogue with the Iranian government. At the time, President Khatami had recently been elected and was seen as a moderate. Top Administration officials saw cracking down on the [MEK], which the Iranians had made clear they saw as a menace, as one way to do so.”  Point by point, the disparaging history of the MEK in this article has been exhaustively researched and investigated by French, British, EU, and US judicial authorities as well as independent scholarship, and thoroughly debunked. This is why no verified allegation of terrorism exists against the MEK or any member, at any time in its 54-year history.

What pains diehard proponents of appeasing the mullahs, including Rezaian, is that the clerics are stuck in a strategic quagmire. The era when the mullahs could forestall the crisis of being overthrown by relying on appeasement is over. The Iranian street will determine the fate the mullahs, especially since all the propaganda by the likes of Rezaian about Rouhani’s moderation has turned out to be hollow.

And if past is prologue, the mullahs’ disastrous 40-year reign has proven that no amount of political and economic concessions will moderate the behavior of this regime. The troglodyte clerics only understand the language of decisiveness and “maximum pressure.”

A shorter version of this response appeared in the washingtonpost.com on September 16.

Previous articleThousands to Rally in New York in Support of Regime Change by Iranians
Next articleSenator Cruz Urges U.S. to Step Up Pressure on Iran’s Regime After Saudi Oil Attack