Romanian NGO calls for UN investigation into 1988 massacre in Iran

NCRI – The Romanian human rights organization SEVA has urged the United Nations to investigate the 1988 massacre of political prisoners in Iran.

SEVA – or Şanse Egale Valoare Autoritate – published a statement on September 28, denouncing the massacre of some 30,000 political prisoners, mainly affiliated to the opposition People’s Mojahedin (PMOI or MEK), in Iran.

The following is the text of the statement issued by SEVA:

Coinciding with the escalation in recent weeks of arbitrary executions in Iran, revelations of new details on the massacre of 30,000 political prisoners in 1988 have shocked Iranian society. The publication of an audio recording of an August 15, 1988, meeting of Ayatollah Montazeri, then successor to Ayatollah Khomeini, with four judiciary and intelligence officials responsible for carrying out the killings in Tehran, has uncovered shocking details on the worst massacre of political prisoners since World War II.

The four officials made up a notorious panel known as the “death commission” among prisoners. One member of this delegation, Mostafa Pour Mohammadi, is the current Minister of Justice under Rouhani; another heads the Supreme Disciplinary Court for Judges; and the third was the General Prosecutor until a few months ago, before being appointed by Ali Khamenei as chair of one of the most important political and economic powerhouses in the clerical regime. He is also mentioned as a nominee to succeed Khamenei as Supreme Leader.

According to a former deputy to the Ministry of Intelligence, 33,700 political prisoners were executed in the massacre carried out on Khomeini’s orders in July 1988. A former official of the presidential office put the total at more than 20,000. Khomeini declared in his Fatwa: “As the treacherous Hypocrites [Mojahedin] do not believe in Islam and their statements are rooted in deception and hypocrisy, and as their leaders have confessed that they have become renegades, and as they are waging war on God, … it is decreed that those who are in prison throughout the country and remain steadfast in their support for the Hypocrites are waging war on God and are condemned to execution.”

In response to questions from his Chief Justice, Khomeini reiterated, “If the person at any stage or at any time maintains his [or her] support for the Hypocrites, the sentence is execution. Annihilate the enemies of Islam immediately.”

Ayatollah Montazeri wrote three letters of protest to Khomeini and the death commission, warning “the massacre of thousands of people in just a few days” would have adverse consequences. The Mojahedin represent “an idea and a way of thinking,” he wrote, and “their credibility will be enhanced” by the killings.

Many of those condemned had been previously sentenced to prison terms. They were either serving or had even completed their sentences. Other execution victims arrested in the wake of Khomeini’s decree were prisoners who had been released, or people with family ties to PMOI members.

Death commissions were formed in Tehran and more than 70 provincial capitals and cities. In 1990, citing a former political prisoner in Isfahan’s Dastgerd Prison, Amnesty International wrote that 10 people were executed almost every day between August and December 1988. Later, prisoners learned that the same was going on in other prisons. Amnesty International, Human Rights Watch, and the International Federation of Human Rights Leagues have declared the massacre a crime against humanity.

Acquiescence to this horrendous carnage and the de facto immunity of its operatives, many of whom presently hold senior positions of political, security and judicial authority, in practical terms emboldens them to carry on with more crimes.

1. To strongly condemn the 1988 massacre and condition relations with the Iranian regime on an end to the current executions;
2. To urge the UN High Commissioner on Human Rights and the Human Rights Council, the UN General Assembly and Security Council to put the investigation into this atrocity on their agenda, and to bring to justice its perpetrators and masterminds. 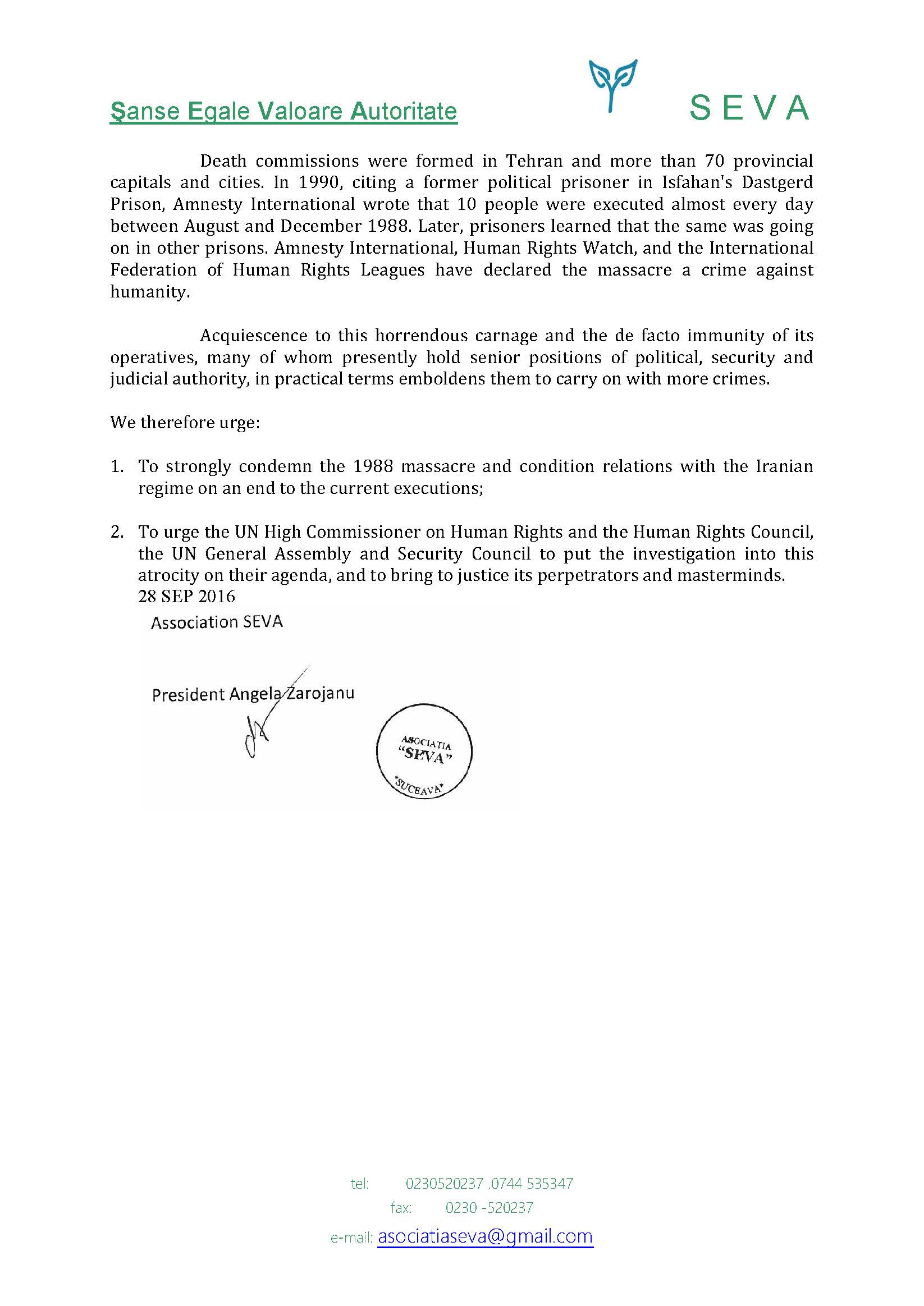 Previous articlePatrick J. Kennedy: The start of a new era in the history of the Iranian resistance
Next articleIran:  People in Ahvaz protest against execution of two youths