Patrick J. Kennedy: The start of a new era in the history of the Iranian resistance 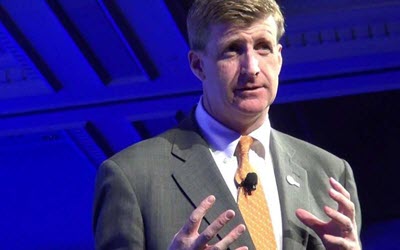 Patrick J. Kennedy is a sincere friend and supporter of Iranian people and their organized resistance, in his article in thehill.com on October 1, he describes the latest position of Iranian resistance and why he believes the international support for it, will only continue to grow from this point forward. Following is the full text:

On Sept. 9, the last group of Iranian dissidents residing in Camp Liberty, Iraq left the country for Europe. Although collective international action was slow in coming, its eventual success helps demonstrate that recognition of and sympathy for the Iranian resistance is on the rise.

The dissidents are members of the principle Iranian Opposition, Mujahedin-e Khalq (MEK). Thirteen years ago, after the invasion of Iraq, the U.S. recognized them as protected persons under the Fourth Geneva Convention. But in January 2009, their security was handed over to the Government of Iraq. Since then, they were subjected to several deadly attacks by Iraqi security forces acting at the behest of Tehran or paramilitary terrorists in Iraq affiliated with the clerical regime in Iran.

Some in Congress and elsewhere were concerned that the U.S. had failed to uphold its commitment to protect the dissidents and criticized the Obama administration. But to its credit, the U.S. State Department helped, in the late stages, to guarantee that the resettlement outside Iraq would proceed to its completion. Many dissidents went to Albania, while a number of Western European countries took in smaller numbers of the MEK refugees.

The MEK is the most organized and sophisticated political movement seeking a democratic system in the Middle East. As the leading constituent of the National Council of Resistance of Iran, led by Maryam Rajavi who espouses a democratic and secular Iran, it has put forth a ten-point plan for the future of the country that includes a commitment to secularism, democracy, regional non-intervention, and the rights of women and minorities. In other words, it stands for all the things that the current Iranian regime stands against.

It is little wonder, then, that Tehran and its regional allies made concerted efforts to halt the resettlement of MEK members and to force the surrender of the Camp Liberty community. All told, before leaving Iraq, 177 people were killed or kidnapped before Camp Liberty was finally emptied this month.

Indeed, over the past 37 years, the Iranian regime has tried everything to exterminate this movement. The world is still largely in the dark about the Iranian authorities’ massacre of political prisoners in the summer of 1988, mainly targeting the MEK and its affiliates. Following a decree by Ayatollah Khomeini, 30,000 political prisoners were slaughtered in a matter of months because they refused to renounce their affiliation with the MEK.

Although the MEK and its decades-long struggle against religious tyranny are not at the forefront of Western policymakers’ minds, we can confidently say that disregard for the Iranian resistance is a thing of the past. The organization has a dedicated roster of hundreds of advocates within the European and American legislatures and their numbers are growing. Their dedication has delivered the former Camp Liberty residents to safety, and just as importantly, it has brought them into closer contact with European governments and the world community, where they can tell their stories and continue their activism in favor of regime change in Tehran.

By a remarkable coincidence, the resolution of the refugee crisis came close on the heels of the revelation of new information about the 1988 massacre, making it a leading topic of discussion among activists and civil society in Iran. That dialogue is shining new light on the extent of the Iranian regime’s brutality in its early days and how that brutality has shaped the character of the regime over the subsequent three decades.

As more of that information makes its way to the West – including the identities of the current Iranian officials who actively participated in the 1988 massacre – it will become more evident that the international communities’ efforts toward Camp Liberty were not only morally right, but absolutely necessary. And in a larger sense, it will become increasingly clear that the same thing is true of the MEK itself and its goals for the future of Iran.

Kennedy served in the House of Representatives from 1995-2011.

Previous articleIran regime’s police chief:  2,000 ‘immodestly’ dressed people are arrested daily in Tehran and some other provinces
Next articleRomanian NGO calls for UN investigation into 1988 massacre in Iran