The Iranian regime meddles in the affairs of Arab countries in order to shield itself from being overthrown, Iranian opposition tells Asharq Al-Awsat 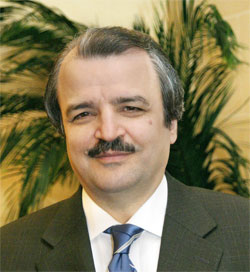 Mohammad Mohaddessin: We have invested over $200 million to build Camp Ashraf; and we are not opposed to relocating the residents outside of Iraq.

The Iranian opposition accused Tehran of meddling in the internal affairs of Arab countries in a bid to “shield itself from being overthrown.”

The People’s Mojahedin Organization of Iran (PMOI/MEK) said that it has invested more than $200 million for the establishment of Camp Ashraf, but two weeks after an attack on the camp, which left 35 residents dead, the organization stressed that it is not opposed to relocating the 3400 of its members currently residing in the camp north of Baghdad to somewhere outside Iraq.

Mohammad Mohaddessin, Chairman of the Foreign Affairs Committee of the National Council of Resistance of Iran (the Iranian opposition) and representative of the residents of Camp Ashraf in Iraq, criticized the “hypocritical” stance of the Iranian regime in Tehran towards the events in Arab countries and the Arab uprisings, and said the clerical regime is extremely frightened of the spreading of protests to Iran as well as the people’s demands for the overthrow of the Velayat-e Faqih regime (absolute clerical rule), which has ruled the country for the past 30 years.

He noted that the Iranian regime has stepped up repression against Iranian dissidents both inside and outside of the country to an unprecedented level, and that it will try to exploit the current situation in Arab countries to bring its sleeper cells into action.

With respect to some Arab countries blaming the Iranian regime for interfering in their internal affairs, Mohammad Mohaddessin told Asharq Al-Awsat in an interview from the opposition headquarters in the French capital Paris, that, “There is no doubt that the talk of the Iranian regime’s interference in the affairs of Arab countries is completely accurate.” He added, “This meddling started in Iraq. and The Iranian regime is using its proxies to separate Iraq from the Arab world, wreaking havoc in the country and placing it at odds with many other Arab countries.”

Mohaddessin said, “The mullahs ruling Tehran have, so far as they have been able to, expanded the scope of this meddling to Bahrain, Lebanon, Kuwait, Yemen, Jordan, Egypt , Palestine and the rest of the Arab countries.” He added, “Currently, the most significant problems in the Arab world are directly or indirectly the result of the Iranian regime’s meddling,” and “the unfortunate reality is that the Arab brother countries are not talking about even a small portion of these interferences.”

He added that the ruling regime in Tehran has always adopted an expansionist logic and has “sought to create an Islamic empire from the ocean to the Gulf. Naturally, Iraq, owing to geopolitical reasons and its Shiite majority, has been the mullahs’ primary and principal target.” Mohaddessin also said, “Allow me to address those in positions of responsibility and the youths who have risen up as well as all the people in various countries in the region, and say that the Iranian regime is the greatest enemy to democracy.” He added that, “The realization of genuine democracies in Iraq and other Arab countries would serve as a metaphorical noose around the neck of the mullahs in Tehran.”

Mohaddessin said, “The recent attack on Camp Ashraf was prompted by the situation of the faltering mullahs’ regime (ruling Iran),” and noted that the Tehran regime has always  “sought to plan and use all its resources to annihilate the residents of Camp Ashraf. After the overthrow of dictatorships in the region and as the Iranian people chant, ‘Mubarak, Bin Ali, it is time for  Seyyed Ali (Khamenei),’ the Iranian regime has stepped up pressures on both the internal and exiled opposition, and was  involved in the attack on Camp Ashraf via elements tied to Iranian regime authorities in Iraq.”

Mohaddessin said the number of victims of the recent attack on Camp Ashraf by Iraqi forces climbed to 35 yesterday after another one of the wounded residents, Bahman Atiqi, died due to lack of resources for medical treatment. He said 13 other wounded residents are fighting death, accusing Iraqi authorities of trying to gradually force the wounded to die, and called on the international community to intervene immediately to help the camp and its injured residents.

When asked about claims that the PMOI’s presence in Iraq conflicts with Iraqi sovereignty, Mohaddessin responded that such assertions that are continuously repeated by officials in Baghdad and also Tehran are “discredited claims,” because it is actually “the Iranian regime that violates Iraqi sovereignty and meddles in all its affairs.” He alleged that Tehran has infiltrated “all administrative, political and security organs and institutions in Iraq.”

With regards to the continued listing of the PMOI as a terrorist organization by the U.S., Mohaddessin explained that the decision dates back to 1997 when the U.S. government sought to make a goodwill gesture towards the regime, and added, “Sadly, despite objections from Congress and U.S. personalities, consecutive American administrations have continued this policy.” He added that a court of appeals in Washington viewed the PMOI’s listing as unfounded and ordered the State Department to re-evaluate the designation.

Regarding the benefits of working in Europe and particularly France for the opposition, Mohaddessin said that despite the sizable economic interests that the Europeans have in their trade relations with the Iranian regime, the Iranian Resistance has been able to garner extensive support in Europe, including majority support in the French National Assembly in relation to the establishment of democracy in Iran based on the “separation of church and state,” as well as a call by the French Senate to the French government to urge the UN to support the residents of Camp Ashraf.  In addition to these efforts, he said, are those carried out by the Council of Europe and European national parliaments.

With regards to efforts on the part of PMOI leaders to move the residents of Camp Ashraf out of Iraq, Mohaddessin said that that the organization built “Ashraf on top of a piece of barren land devoid of all resources and turned it into a city equipped with modern facilities, investing more than $ 200 million in the process.” He added, “Despite all this, we have told the UN and the Americans that we do not insist on staying in Iraq, and they can bring a plane and move all the camp residents to Europe or to the United States. We will even pay all the plane costs ourselves. But our preference is to go to our own homeland Iran, on the condition that security and freedom of expression and political activity is provided.”

Mohaddessin explained that the Iranian people do not want reform within the regime, because they have realized with every fiber of their being that the Velayat-e Faqih (absolute clerical rule) system is neither Iranian, nor Islamic, nor humane, and that it is incapable of any reform whatsoever.

“This regime is extremely isolated inside Iran. If a genuine election were to be held, the mullahs (clerics) would not even be able to muster 3 percent of the vote, and that is why they persistently shun free elections.” He noted that since 1979, the ruling regime has been able to “secure its survival through cruel suppression and execution, including the execution of over 120,000 people who were primarily members and supporters of the Iranian Resistance. We have published the names and particulars of 20,000 of these martyrs.”