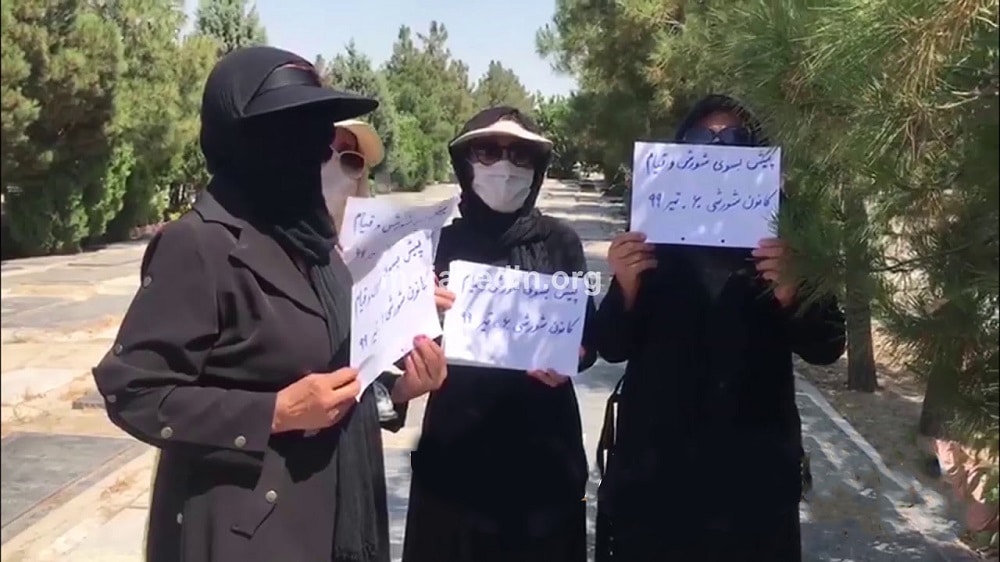 The term “Resistance Unit” might be a newcomer and still far from mainstream in political literature or in the world of global politics. Yet slowly but surely, it is paving its way to recognition by breaking the wall of fear and censorship, both by the regime’s security apparatus as well as the disregard of the international media that is oriented by certain interests called ‘real politics’.

As explained many times by the Iranian Resistance, the MEK Resistance Units are ordinary people living in Iran’s society who have decided to dedicate themselves to regime change. They are people from all genders, classes, ethnic groups, geographical locations, and professions who are well-connected to the organized resistance and put their lives at risk to challenge the regime’s vast network of suppression, one action at a time.

They write graffiti on the walls, they put posters on bridges, they take over governmental websites and billboards, they broadcast slogans in public places… everything a creative mind can come up with to tell other people that terror is about to end, and hope must prevail.

Although the Iranian regime has arrested hundreds of the Resistance Units, their numbers are growing by the day. Many Iranian prisons are now filled with hundreds of these brave souls and through family members who brought messages out of prison, some have even said that they actually enjoy being among their new brothers and sisters and the spirit of resistance is spreading behind bars more than beyond the walls.

The Iranian Resistance recently showcased a video of 5,000 messages from MEK’s Resistance Units inside Iran. An effort that was initiated only a couple of months, showed the units’ dedication to survive and thrive, defiant of the regime’s increased crackdown and censorship.

Addressing the Free Iran 2022, leaders and legislators from all around the world have expressed their emotions and insight about the work of the Resistance Units and how it will shape the future of Iran.

The first United States Secretary of Homeland Security Tom Ridge: “Your resistance grows in strength, day by day. There is the rising tide of protests and the impact of opposition actions by MEK Resistance Units in Iran that encourage people to voice their opposition to the regime and shatter the regime’s air of invincibility and intimidation. The regime today symbolizes a very weak theocracy. It has no solution but to suppress its people, especially women. It is at the height of its internal political and social isolation.”

“I salute the Resistance Units in Iran that with great sacrifice and a risk to themselves and their families rise up to pave the way for voicing protests against this regime. And despite mass arrests, their actions have grown in depth and breadth. They inspire others to do the same.”

Former Canadian Prime Minister Stephen Harper: “This organization, the NCRI, and your Resistance Units have made your presence felt. There have been, I’m told, over two and a half thousand acts of defiance of various types, including last February, the disruption of state-controlled radio and television, allowing messages to be broadcast directly to the Iranian people by Madame Rajavi.”

Ryszard Czarnecki, member of the European Parliament from Poland: “I salute the bravery and sacrifice of members of the Iranian Resistance and the resistance units inside Iran who have exactly on the verge of bringing an end to the spell of the regime’s crackdown and suppression… I have a special message to the network of “Resistance Units” associated with the Iranian opposition, the PMOI. You have never given up, and this is how you have shown to the world that from one Ashraf you have spread all over Iran, and your significant advances are pushing you to the path for freedom.”

8. MEP @r_czarnecki: “My special message to PMOI-associated #ResistanceUnits: You never gave up & from Ashraf-1, you have spread to all over #Iran and your significant advances are pushing for the path to #freedom.”#Westand4FreeIran
Excerpts of speech:pic.twitter.com/ZW93IfCQuA

Former Secretary of the US Air Force Deborah Lee James: “I’m filled with emotion as I watch these courageous women and men of Iran who have continued sending these messages over and over again despite the cold-blooded shooting of protesters by security forces and more than 400 political executions carried out by the government this year alone. Again, I say this is remarkable bravery by the people in the face of unspeakable brutality by the regime… I know that the organized opposition, spearheaded by Resistance Units inside Iran, is determined to achieve just these goals.”

Former Canadian Minister Tony Clement: “There is a rise tide of protests and the impact of opposition actions by MEK Resistance Units in Iran that encourage the people of Iran to voice their opposition to the regime and shatters the regime’s air of invincibility and intimidation which they seek to use to denigrate the morale of people who wish to confront this regime.”

“Let me say in conclusion that I want to salute the Resistance Units in Iran with great sacrifice and risk themselves and their families that they want to rise up and pave the way for the voicing of protests against this regime. Their resistance is what will guarantee liberty and the downfall of this very terrible regime.”

6. Fmr. #Canadian Minister @TonyclementCPC: I want to salute #ResistanceUnits in #Iran who sacrifice and take risks for themselves. Their resistance will guarantee #liberty & the downfall of this very terrible regime.#Westand4FreeIran
Excerpts of speech:pic.twitter.com/SG5Y9QOG5e

“The dictators thought that putting the genocidal thug Ebrahim Raisi in, would stabilize matters, would keep the population under control, would arrogate power to the center and secure its base. What they didn’t reckon with is the opposition of the population. Raisi has spawned mass protests, protests every week, new Resistance Units as we speak.”

“And this event supported as never before. We’re not talking about 1000 Resistance Units and video clips into your conference. We’re talking about tens of thousands. As people in growing numbers express their virulent, heartfelt, and unrelenting opposition to the regime and their desire for proper democracy. The flame of freedom continues to burn formidably in Iran and that won’t change.”

Franc Bogovič, MEP from Slovenia: “This year’s fast developments in Iran leave a lot of hope for a quick march towards democracy. I was amazed by the progress achieved by the Resistance Units inside Iran – those brave people, who know no limits in their goals aimed at breaking the atmosphere of terror and the frustration spread by the regime among the population.”

“At the same time, the people of Iran show a lot of enthusiasm for such brave actions. We heard about major activities such as disrupting the regime’s radio and television or comprising security cameras of Tehran’s municipality IT Center.”

“And an interesting one was the major cyberattack on the Ministry of Agriculture’s websites and databases which was a campaign in response to the suppression of the oppressed farmers of Iran, especially in Isfahan.”

“To break the wall of repression, they defaced pictures of Khamenei on the homepage of the Ministry of Agriculture. This was in response to the brutal attack by the regime’s repressive forces against Isfahan farmers who opened fire on the deprived farmers, blinding many of them with pellet guns. Or again when pictures of Mrs. Rajavi appeared on the main state TV emission for seconds, to fill the people with joy. The brave people who are engaged in these, risking their lives, merit all our support. Those actions point to where to look for the real alternative to the clerical regime in power in Iran.”

10. MEP @Franc_Bogovic: “I was amazed by #ResistanceUnits‘ progress in #Iran. They don’t know limits in breaking the atmosphere of terror and frustration spread by the regime amongst the population.”#Westand4FreeIran
Excerpts of speech:pic.twitter.com/n6dV7gvouw