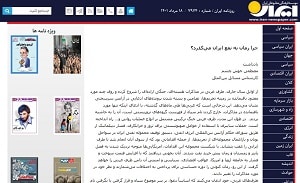 Today, the state-run ‘Iran” newspaper revealed how the Iranian regime considers the Western appeasement policy as a sign of weakness and intends to increase its extortion tactics as it believes it can force the West, especially the United States, into concessions.

In a column titled ‘Why is the time on Iran’s side?’, the daily wrote today: “Considering all aspects, like international developments following the war of Ukraine and Taiwan, the energy shortage and increase in demand in the coming months, increase in prices and its political, economic and security consequences, our domestic power in neutralizing the sanctions, opening relations with foreign countries outside the Western Bloc, as well as the increase in the nuclear capabilities of the Islamic Republic of Iran and achieving more defense and regional goals, everything indicates that time is in Iran’s favor. In the coming days and weeks, we will see that the leverage of the western side will lose influence and Iran’s pressure on the western side will become heavier. If the western side practices real-politics, it will find that the agreement today is better than the one of tomorrow. Because at least Joe Biden, the President of the United States, desperately needs an achievement to deliver in the upcoming elections in America.”

As the Iranian regime struggles to create an impression that there is no viable opposition to the tyrannical rule of the mullahs, the Iranian Resistance has launched the “We can and we must” campaign, declared by Mrs. Maryam Rajavi, president-elect of the National Council of Resistance of Iran (NCRI), in a recent speech.

Political Prisoner Responds to Prosecutor’s Claims in Letter From Prison Political prisoner Maryam Akbari Monfared has reacted in an open letter to the recent remarks of Hossein Mousavi Tabrizi, chief prosecutor of the Revolutionary Courts during the 1980s, about the execution of political prisoners in 1988.

Responding to why complaints about the extrajudicial executions in 1988 have not been followed up in Iran Mousavi Tabrizi recently claimed in an interview that “in the first days when [political prisoners] were tried, the families could have filed a complaint, but they did not then.”

MEK Supporters Rallies in Canada, and Luxembourg Against Iran’s Regime—August 6, 2022

Saturday, August 6, 2022: Freedom-loving Iranians, supporters of the People’s Mojahedin Organization of Iran(PMOI/MEK) in Canada—Toronto, and Luxembourg staged rallies against the mullahs’ regime and called an end to the appeasement policy toward this regime.