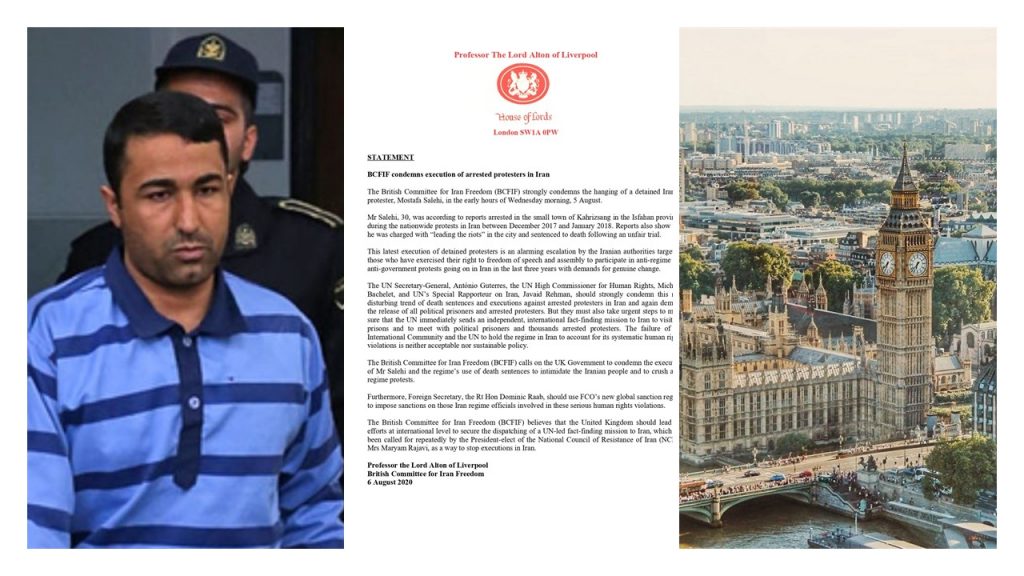 The religious fascism ruling Iran on Wednesday hanged Mostafa Salehi, who was arrested during the 2018 nationwide Iran protests, prompting international condemnation. In a statement, the British Committee for a Free Iran (BCFIF), which enjoys the support of the United Kingdom’s Members of Parliaments from different political tendencies, condemned the regime’s heinous crime of executing Mr. Salehi.

This execution shows the regime’s utmost fear of the restive Iranian society. This was a desperate move by the mullahs’ regime after its major setback in the face of an international and domestic campaign that forced the mullahs to halt the execution of three detainees arrested during the 2019 uprising in Tehran and eight others in Isfahan, where Mr. Salehi was executed.

Iranian opposition leader Mrs. Maryam Rajavi in this regard said: “Reluctantly forced to refrain from executing eight other detained protesters subsequent to the millions-strong social media campaign calling for the halt in executions, the ruling religious fascism carried out this execution in retaliation and in order to terrorize the public and thwart the outbreak of any uprising.”

I strongly condemn the execution of #Iran protester Mostafa Salehi in Isfahan. After million-strong campaigns forced the mullahs to retreat from executing 8 protesters, the regime attempted to retaliate by this execution to terrorize the public and fend off popular upheavals.

Below is the full text of BCFIF’s statement:

The British Committee for Iran Freedom (BCFIF) strongly condemns the hanging of a detained Iranian protester, Mostafa Salehi, in the early hours of Wednesday morning, 5 August.

Mr. Salehi, 30, was according to reports arrested in the small town of Kahrizsang in the Isfahan province, during the nationwide protests in Iran between December 2017 and January 2018. Reports also show that he was charged with “leading the riots” in the city and sentenced to death following an unfair trial.

This latest execution of detained protesters is an alarming escalation by the Iranian authorities targeting those who have exercised their right to freedom of speech and assembly to participate in anti-regime and anti-government protests going on in Iran in the last three years with demands for genuine change.

The UN Secretary-General, António Guterres, the UN High Commissioner for Human Rights, Michelle Bachelet, and UN’s Special Rapporteur on Iran, Javaid Rehman, should strongly condemn this new disturbing trend of death sentences and executions against arrested protesters in Iran and again demand the release of all political prisoners and arrested protesters. But they must also take urgent steps to make sure that the UN immediately sends an independent, international fact-finding mission to Iran to visit the prisons and to meet with political prisoners and thousands arrested protesters. The failure of the International Community and the UN to hold the regime in Iran to account for its systematic human rights violations is neither acceptable nor sustainable policy.

The British Committee for Iran Freedom (BCFIF) calls on the UK Government to condemn the execution of Mr Salehi and the regime’s use of death sentences to intimidate the Iranian people and to crush anti-regime protests.

The British Committee for Iran Freedom (BCFIF) believes that the United Kingdom should lead the efforts at international level to secure the dispatching of a UN-led fact-finding mission to Iran, which has been called for repeatedly by the President-elect of the National Council of Resistance of Iran (NCRI), Mrs Maryam Rajavi, as a way to stop executions in Iran.

Professor the Lord Alton of Liverpool 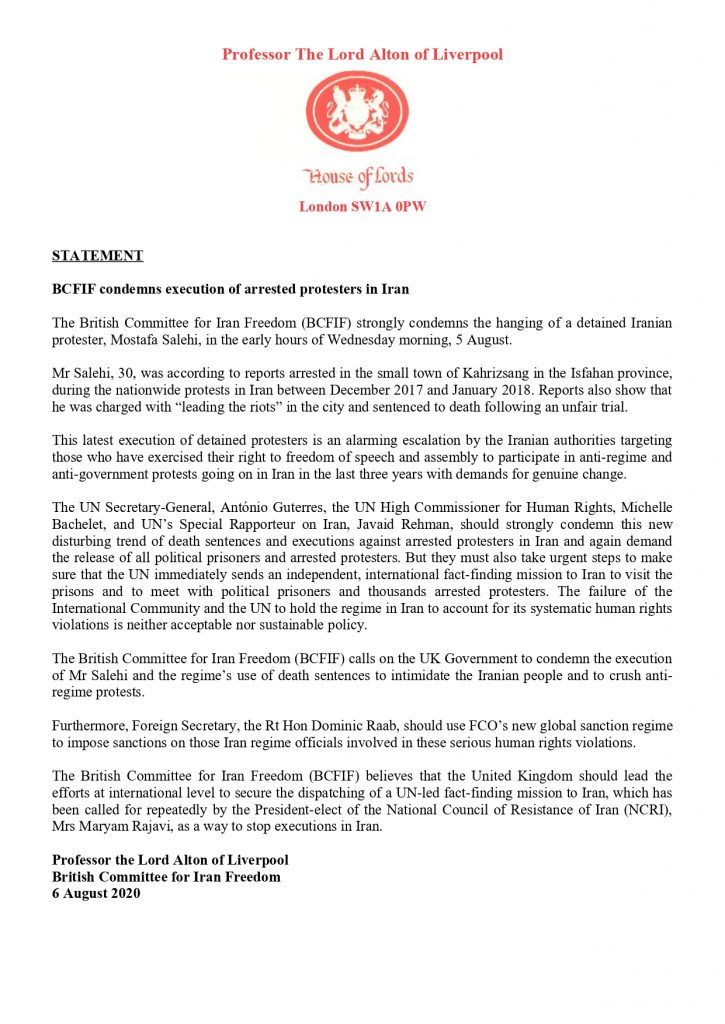 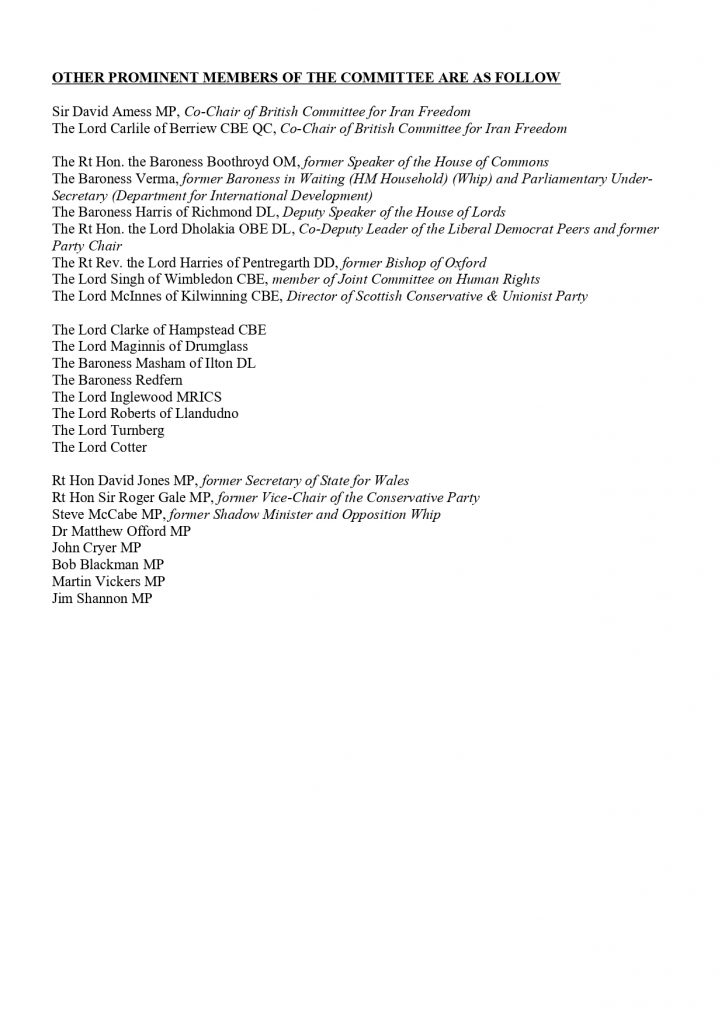 Previous articleLatest News in Brief – August 8, 2020
Next articleIran Is the Most Dangerous Country in the World – Remarks by Alan Dershowitz

On Friday, lawmakers from both across Europe and the United States gathered virtually for a “Trans-Atlantic Summit on Iran Policy.” The event was hosted...
Read more
News

The People’s Mojahedin Organization of Iran (PMOI-MEK) announced this afternoon, September 18, 2020, that Coronavirus has taken the lives of more than 105,200 in 440 cities across Iran....
Read more
Search