The nationwide Iran protests in November 2019, and its second wave in January 2020, along with the Iranian people’s general boycott of the regime’s sham parliamentary election in February, underlined the fact that the mullahs’ regime has lost its legitimacy for years.  The restive Iranian society, after 40 years of corruption, oppression and wrong economic policies, erupted and with its protests shook the regime’s foundations. The regime’s subsequent killing of over 1500 people, and later deliberately letting people contract COVID-19, by denying the existence of virus in Iran during its sham parliamentary elections, and now forcing people back to work amid the pandemic to create mass human causalities, are some criminal yet desperate moves by a failing regime.

The Iranian regime is indeed riddled with crises. The growing international isolation of the regime and pressure on the mullahs over their malign activities, an explosive society which could explode at any moment, protests in Iraq and Syria against the regime’s meddling and creation of a united front against the regime’s terrorism, the intensified infighting of the regime’s inner circle and factions over more share of power and the COVID-19 pandemic are the most notable crises of this regime.

The People’s Mojahedin Organization of Iran (PMOI/MEK) “Resistance Units” have a key role in spreading a message of hope and resistance throughout Iran by their ongoing activities. The National Council of Resistance of Iran (NCRI) held its “Free Iran Global Summit” for three days in July to urge the international community to support the Iranian people’s desire for regime change and recognize their right for resistance and overthrow of the Iranian regime. This event connected over 30,000 locations across the globe and was attended by over 1000 personalities and renowned politicians of all political tendencies.

One of these personalities was Ambassador Robert Joseph, former Undersecretary for Arms Control & International Security of the U.S. Department of State. 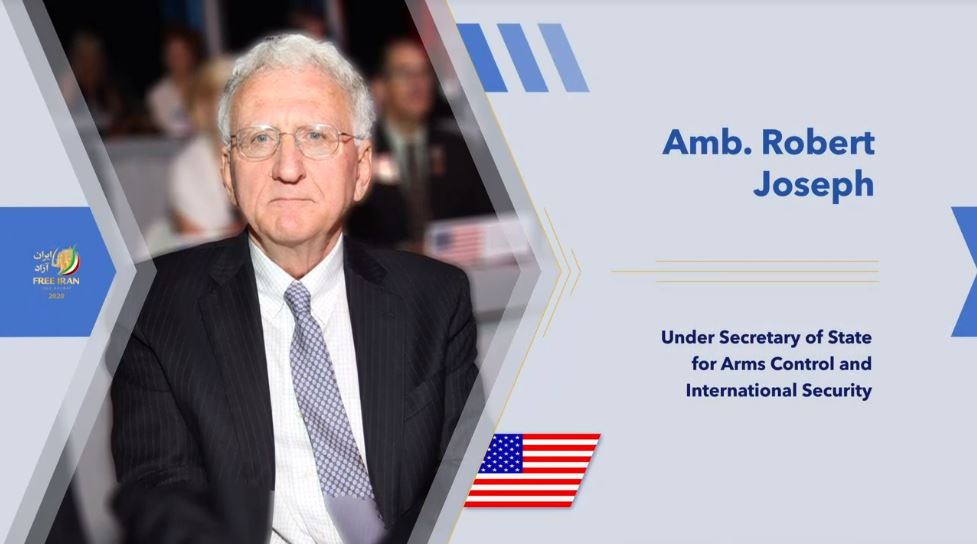 The full text of his speech is below:

Thank you. It’s always a privilege to be part of this incredible annual gathering of freedom fighters. Each year, I feel that we come closer to our goal of a free Iran. And this year is certainly no exception. The end of the religious dictatorship is in sight. And the mullahs know it. They know their days are numbered. You can see it and you can feel it in their acts of desperation and their inability to reform. The mullahs know the economy is in shambles, driven to bankruptcy by systemic corruption, by incompetence, and by international sanctions imposed on the regime for its sponsorship of terrorism, its pursuit of nuclear weapons, and its foreign adventurisms that have robbed the Iranian people of their prosperity and their very livelihood. The regime has nowhere to turn to reverse this economic freefall. And selling out the country’s economic future to China is just the next desperate move that will only further ensure the regime’s demise.

Why the end of the Iran’s regime is in sight? Former US Undersecretary of State explains

The mullahs know that they have lost all legitimacy. The Iranian people have now become the principal threat to the regime. The mass killings in the streets across Iran are acts of desperation by a dying regime. Again, there is nowhere to turn. There is nowhere to hide for those on the wrong side of history. The mullahs know that the people will never forgive them for their role in the human tragedy that is caused tens of thousands of deaths from the coronavirus pandemic, a pandemic that continues to ravage the country. While the mullahs may try to hide the truth, the people know. And the mullahs know that the people know. As Senator Torricelli stated, the game is up, the game is up.

While we prepare for the end of the regime, the mullahs’ only response is more corruption and more repression of the people. So, what must be done? We must keep the pressure on the regime from the outside. It’s working and it must not be relieved by a return to policies of appeasement. We must not throw the regime a lifeline by pursuing new fatally flawed agreements in exchange for more old false and broken promises. We must work to cut off access to arms by extending the arms embargo. As Mrs. Rajavi has said, not a single bullet, not a single bullet. We must deny the regime any legitimacy by telling the truth, by keeping the focus on its reign of terror over the past 40 years. The recent House of Representatives resolution with wide bipartisan support is an important step, as are the growing calls to hold those members of the regime responsible for crimes against humanity. Here I can only second the recommendations just made by Director Freeh. We owe it to the martyrs, and we owe it to the future.

Most important, we must support the democratic opposition, the NCRI, the MEK, and most important the brave resistance units inside Iran. We must also continue to fight against the false narrative surrounding the MEK that had become deeply ingrained given the regime’s massive and sustained disinformation campaign, served by an echo chamber of regime apologists who often masquerade as journalists and thinktank experts. We know that regime change must come from within. We know regime change will come from within. Mrs. Rajavi and the 10-point plan provide the vision for effective action and the means to ensure a peaceful transition to a secular, non-nuclear, democratic and free Iran. Mrs. Rajavi, I stand with you. I stand with you. Hazer, hazer, hazer. Thank you very much.