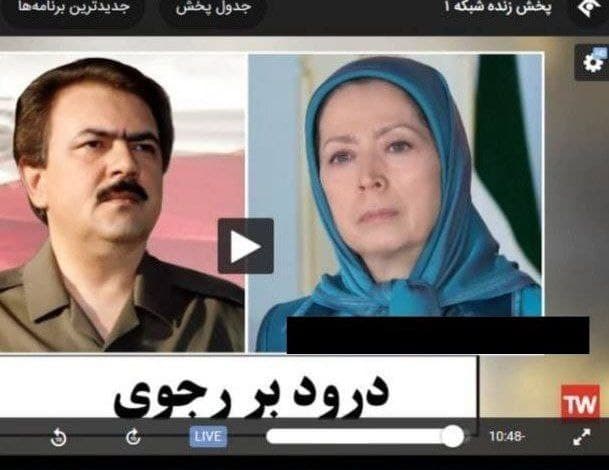 This afternoon, Thursday, January 27th, the Iranian regime’s state television Channel 1 and the Quran Channel were disrupted. A crossed-out image of Iranian regime supreme leader Ali Khamenei, followed by images of Massoud Rajavi, the leader of the Iranian Resistance, and Mrs. Maryam Rajavi, President-elect of the NCRI. The images were accompanied by audio slogans “Death to Khamenei!” and “Viva Rajavi”!

Radio Tehran, Radio Eghtesad, and Radio Talawat were also hacked, and slogans of death to Khamenei and greetings to Rajavi were broadcast on them as well.

“Given that the security infrastructure was designed to protect the broadcaster, this is not an easy task and it is very complicated,” said Reza Alidadi, technical director of the state’s Radio and Television. “Only those who own the technology can damage the systems. We are currently investigating to determine the source of the issue and the problem.”

Tasnim News Agency also reported the incident, stating that the possibility of “human element infiltration” should also be considered and called for the necessary investigation in this regard.

“More than 400 TV and radio servers were offline and completely destroyed,” according to sources providing reports from inside Iran’s TV and radio networks.

“Footage related to the MEK were suddenly aired at 3 pm Tehran time on 14 TV and 13 radio stations, and we were caught off guard,” according to reports from inside the regime.

“Our colleagues are investigating the incident. This is an extremely complex attack and only the owners of this technology could exploit and damage the backdoors and features that are installed on the systems,” said Ali Dadi, deputy chief of the Islamic Republic of Iran Broadcasting (IRIB), told the state TV channel IRINN on Thursday.

According to reports from inside Iran, security and intelligence agents’ squads have closed all entrances and exits of the premises belonging to the state’s broadcasting corporation, Islamic Republic of Iran Broadcasting (IRIB), and conducted hastily arrests and interrogations of innocent employees of IRIB.

Akharin Khabar (Latest News) Telegram group reported this afternoon: “How did the Monafeqin (meaning the Hypocrites, the pejorative term used by the Iranian regime’s for the Mojahedin-e-Khalq) reach the radio and television antennas?! The technical and broadcasting systems are completely isolated, they are equipped with acceptable security protocols and are not accessible via the Internet. Detailed information on the various dimensions of the sabotage has not yet been released, and IRIB officials are investigating the case, but sabotage seems to have been the most likely scenario.”

Hesamoddin Ashna, a former deputy minister of the regime’s intelligence ministry (MOIS) and Hassan Rouhani’s press adviser tweeted: “You can expect anything from this hypocritical organization.”

Previous articleIran: Irlu Regime’s Terrorist-diplomat in Yemen Was One of the Main Perpetrators of the Massacre of MEK in Camp Ashraf in 2013
Next articleIran News in Brief – January 28, 2022