Iranians, supporters of the People’s Mojahedin Organization of Iran (PMOI or MEK) and the National Council of Resistance of Iran (NCRI), along with numerous renowned politicians from both sides of the Atlantic will join a virtual conference on June 20, commemorating the beginning of the 40th year of Resistance against the religious fascism ruling Iran.
Read more 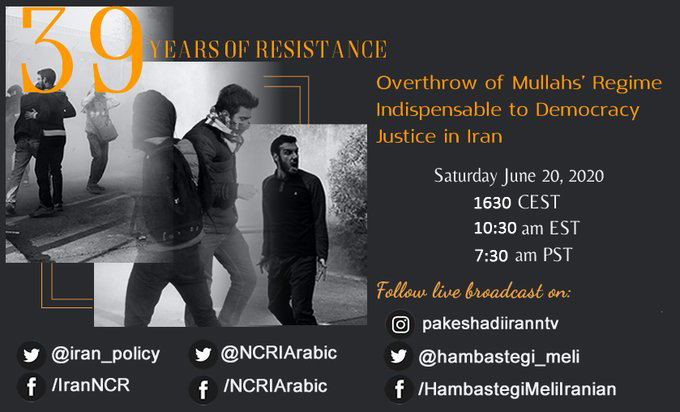 All evidence suggests that the fugitive cleric and former Iranian judiciary official and judge, Gholamreza Mansouri, who was under arrest and investigation in Romania, has been assassinated by the Iranian regime’s intelligence services using their signature methods.

A glance at some of the Iranian regime’s new MPs

The Iranian regime new parliament, result of an engineered sham elections started working on May 27, 2020
The Parliament’s Speaker is Mohammad Bagher Qalibaf, who is a leading figure of the regime’s oppression & corruption
Qalibaf has been previously exposed by the Iranian Resistance
In this video, we intend to have a quick glance on the background of some other MPs
1- Ahmad Amir Abadi Farahani, MP from Qom, member of the Majlis Presidium
Ahmad Amir Abadi is an IRGC member, & participated in the Iran-Iraq war
He had also been responsible for the IRGC’s cultural division in Qom
2- Mohammad Hossein Farhangi, MP from East Azerbaijan province, Majlis Presidium’s speaker
A senior IRGC commander in Azerbaijan. During the Iran-Iraq War, he was the Chief of Staff of the 31st Ashura Division, one of the most important & largest divisions of the IRGC in the war
3- Hossein Ali Haji Deligani, member of the Majlis’ presidium from Isfahan province
During the Iran-Iraq War, Deligani, was the commander of an IRGC company
After the war, he commanded the Basij in the IRGC division of Zarrinshahr, Najafabad, & Isfahan
4- Mohsen Dehnavi, a member of the Majlis’ presidium
He was in charge of the Student Basij at the Sharif University of Technology
He was detained at Boston’s Logan Airport on July 11, 2017, & later sent back to Iran for his connections with the IRGC & Basij forces
Other MPs are also IRGC members or affiliated with this terrorist organization
In a nutshell, the regime’s new parliament as always, is a den of terrorists & thieves
A glance at some of the Iranian regime's new MPs

Maryam Rajavi: The regime’s cover-up and inaction is the reason for the unprecedented spread of Coronavirus in Iran

Iran will be free via Resistance Units and uprising, let’s rise up to overthrow the religious tyranny

This morning, Friday, June 19, 2020, the IAEA Board of Governors adopted by a majority vote the resolution proposed by the United Kingdom, France, and Germany.

Activating the trigger mechanism, re-imposing six UNSC resolutions, bringing uranium enrichment to a complete halt, closure of nuclear sites, having access to any suspicious site at any time, are needed to prevent the Iranian regime’s access to the A bomb.https://t.co/fa7cgF3p0E

Saturday, June 20, 2020, marks the 218th day since the beginning of the nationwide Iran protests.