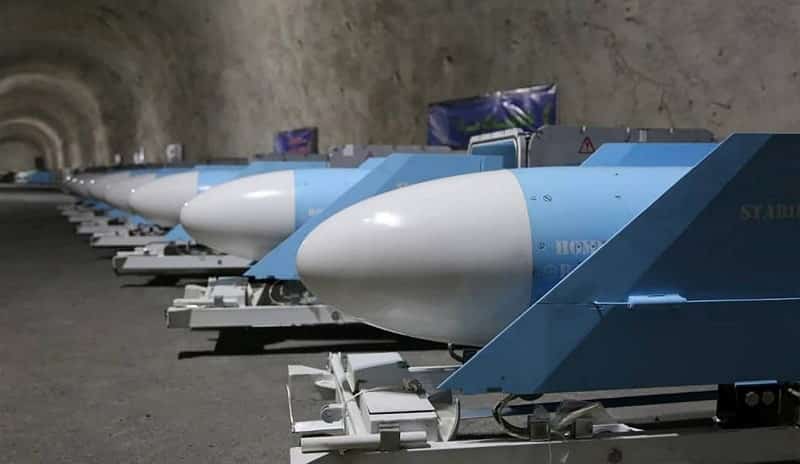 It has been more than a decade since Iran’s Islamic Revolutionary Guard Corps (IRGC) rebranded its air force as the “Aerospace Force” in order to reflect the paramilitary’s growing emphasis on developing advanced missiles rather than maintaining an arsenal of outmoded military aircraft. But the name change was made in recognition of a trend that had begun decades earlier. IRGC Aerospace Force commander Amir Ali Hajizadeh acknowledged this in 2019 when he told state media documentarians that the regime began earnestly manufacturing missiles in 1984 and immediately set about digging tunnels to protect what they anticipated would be a massive stockpile.

Thirty-five years later, the scope of that stockpile was highlighted for an international audience by the People’s Mojahedin Organization of Iran (PMOI-MEK), which revealed the existence of sprawling tunnel systems in a press conference that also addressed Tehran’s culpability for a September 2019 missile and drone attack on Saudi Arabian oil infrastructure. It was only in the wake of those disclosures that state media interviewed Hajizadeh and made the underground missile stockpiles a matter of public record. And in an effort to compensate for the effects of having state secrets exposed, they did so in a way that made the regime’s missile program seem like a major threat to its adversaries.

“We have to protect our arsenal in an adequate way. The idea goes back to 1984, just when we began thinking of missiles,” Hajizadeh said. “Nowadays they call [the tunnels] missile-cities, deep beneath mountains, very sophisticated tunnels are dug deep into the ground to stockpile ammunition, and hide missile launching bases and other instruments and also the personnel under war conditions. Our enemies are worried because such locations are out of their reach.”

As with most of the Iranian regime’s boastful rhetoric, this overstates the case. But that is not to say the danger to Western countries isn’t real. It is very real, and it is rapidly growing. The IRGC has carried out about 10 separate ballistic missile tests in the few years since Iran and six world powers signed the nuclear deal.

Each of these tests was a clear warning about the threat that lay buried beneath Iran in its labyrinthine network of “missile cities.” Since June 2017, the threat has been powerfully underscored by the actual military application of Iran’s ballistic missiles to conflicts beyond its borders. In January 2020, the regime turned those weapons against US personnel, attacking two Iraqi military bases where they were housed.

The incident was intended as retaliation for the airstrike that killed IRGC Quds Force commander Qassem Soleimani earlier that month, but the endeavor’s success is a matter of debate. No one was killed at either of the affected bases, but one of them was struck by ten ballistic missiles, and dozens of the Americans stationed there were later diagnosed with traumatic brain injuries.

That incident clarifies the regime’s willingness to use such weapons, and it should raise serious concerns about what will happen if those weapons continue to evolve in terms of range and precision, and especially if they come to be outfitted with a nuclear warhead.

Unfortunately, that nightmare scenario is by no means far-fetched. The Iranian regime has fully abandoned its obligations under the 2015 nuclear deal and has recently begun work on the manufacture of uranium metal, an essential component for the core of a nuclear weapon. It has faced little consequence for this from the deal’s European signatories or from the European Union as a whole. Instead, the EU leadership has expressed absolute commitment to keeping the agreement in place, even as the regime advances its nuclear program while also watching the clock tick down to the day when it will be free to openly, legally acquire more advanced ballistic missile technology.

Provisions that ostensibly restrain the development of those weapons expire on October 18, 2023, but the restrictions are decidedly weak while they stand. The Iranian regime’s decision to repeatedly deploy ballistic missiles is a clear testament to that fact. Due to the aforementioned UN Security Council Resolution 2231, the language regarding Iran’s missile development was weakened from a clear ban on any work involving nuclear-capable weapons to a non-binding appeal for the regime to avoid work on weapons that were designed with that express purpose.

Tehran fought hard for this change. And as the test-firings and military deployments make clear, the regime has exploited the result to its utmost. But those out-in-the-open provocations don’t tell the whole story. The scale of the ballistic missile threat began coming into sharper focus in 2019 with the MEK’s disclosures about – and Iranian state media’s confirmation of – vast underground networks of ever-growing stockpiles.

On March 11, more of the same disclosures emerged in a press conference held by the MEK’s parent coalition, the National Council of Resistance of Iran (NCRI). It noted that in the year following the Iranian ballistic missile strike on Ain al-Asad base in Iraq, authorities dug at least two new tunnels just at one of the missile sites from which that attack was staged – a complex near Iran’s western border, at Konesht Canyon in Kermanshah Province.

The press conference also identified that site as home to mobile launch platforms that could allow the regime to move a portion of its arsenal even closer to the border. If Iran’s boldest claims about prior tests and the maximum range of its ballistic missiles are to be taken seriously, this could put much of Europe in the range of weapons that are potentially capable of carrying nuclear warheads. Of course, the regime’s propensity for overblown rhetoric suggests that that situation is still a long way off, yet it is a possible outcome that the West cannot afford to downplay.

Yet, there is still time to act. The ongoing revelations from the MEK are revealing more and more details about the threat, meaning that there is also an opportunity to act. And that is exactly what the US and Europe must do, first by correcting the toothless language of the UN resolution and then by using all available tools in order to pressure the Iranian regime to dismantle existing ballistic missile stockpiles, halt further development of such weapons, and come clean about any and all prior connections between that development and the regime’s efforts to acquire nuclear weapons capability.