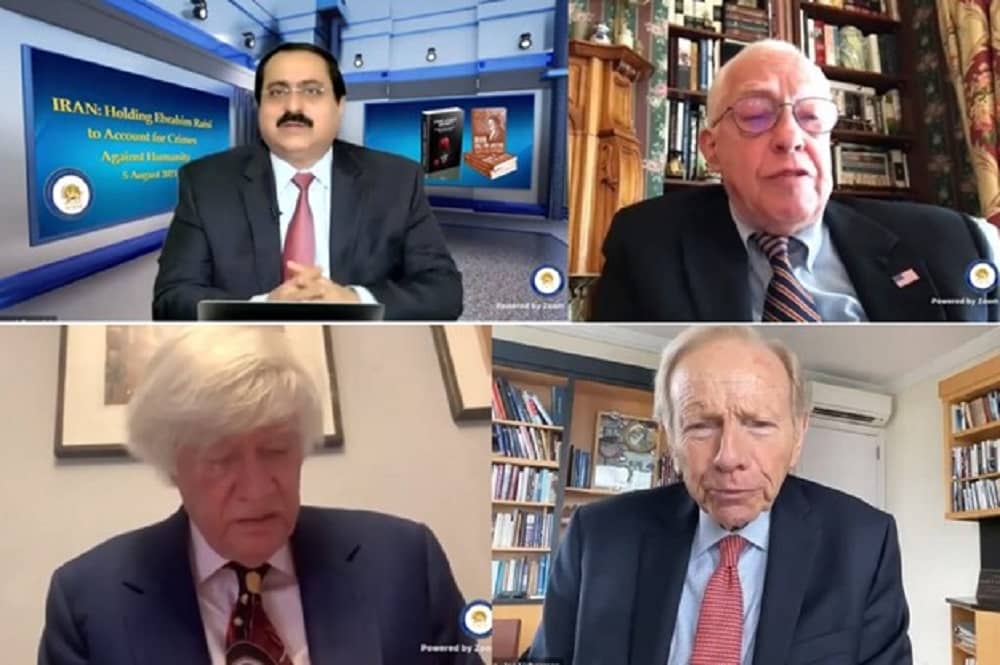 On Thursday, the US Representative Office of the National Council of Resistance of Iran hosted a virtual panel discussion to address the inauguration of Iran’s new president, Ebrahim Raisi, which was taking place that same day. The event was moderated by NCRI-US Deputy Director Alireza Jafarzadeh and featured remarks by former US Attorney General Michael Mukasey, former Senator Joseph Lieberman, and a British barrister and human rights expert, Geoffrey Robertson, QC.
The primary focus of the discussion was US foreign policy in the wake of Iran’s presidential transition, and Lieberman said at one point that the US “has a critical leadership role to play” in holding Raisi accountable for past crimes as well as modeling a more assertive posture toward the regime that elevated him to its second highest office. It is widely believed that Raisi’s appointment to the presidency is intended in part to set the stage for him to take over the supreme leadership following Ali Khamenei’s death or retirement, whereupon he would no doubt oversee the same policies and behaviors that define Khamenei’s legacy.
Raisi was effectively hand-picked by Khamenei to replace the regime’s outgoing President Hassan Rouhani. In recognition of Raisi’s status as the supreme leader’s favored candidate, the vetting body known as the Guardian Council excluded all other viable candidates from the ballot for the June 18 election, including other hardliners with similar records of loyalty to Khamenei.
What appeared to set Raisi apart from these would-be competitors was a history of high-level participation in some of the country’s worst crackdowns on dissent, dating back at least to 1988, when the regime executed over 30,000 political prisoners over the course of about three months. While other candidates and certainly other occupants of leading Iranian government offices have been implicated in human rights abuses of their own, Lieberman described Raisi as having “the blood of more Iranians on his hands than… most of his predecessors combined.”

This was confirmed by Geoffrey Robertson, who participated in Thursday’s discussion provided a British perspective alongside details of the 1988 massacre which he had accumulated through eyewitness interviews and official documents obtained when he undertook one of the first professional investigations into the killings. Robertson stated unequivocally that the 1988 massacre was the worst crime against humanity to be directed against prisoners since the end of World War II, and that the prisoners in question were mostly political prisoners, detained for “crimes” as insubstantial as handing out pamphlets on behalf of the country’s leading pro-democracy opposition group, the People’s Mojahedin Organization of Iran (PMOI/MEK).
Following Robertson’s remarks, Alireza Jafarzadeh read excerpts from the fatwa that Khomeini issued sometime in July 1988 to set the stage for the massacre. He noted that the language of that fatwa was “very specific” in its targeting of the PMOI, which nevertheless survived its attempted eradication and went on to become the leading constituent of the NCRI’s coalition.

In recent years, the MEK has been credited with organizing and leading many of the protests that comprised nationwide uprisings in January 2018 and November 2019, as well as the mass boycott of the June 18 election that brought Raisi to power.
Iranian regime officials have confirmed that the majority of eligible voters did not take part in that election, and the NCRI has reported that turnout was less than ten percent. “Resistance Units” affiliated with the MEK posted graffiti and posters and held public demonstrations in advance of the boycott, arguing that non-participation in the tightly-controlled proceedings would be a way to “vote for regime change.” Support for that goal had been a key feature of the two preceding uprisings, and in the weeks since Raisi’s “victory” was confirmed, a growing number of demonstrations have come to feature chants such as “death to the dictator” and “we do not want the Islamic Republic.”
Michael Mukasey made reference to these protests and uprisings while discussing options for holding Raisi accountable on Thursday. He and his fellow speakers all agreed that sanctions under the Magnitsky Act would be a meaningful way to “impede the ability of Raisi to function” while also bringing greater international attention to the crimes of the Iranian regime. This, Mukasey suggested, would further weaken an already vulnerable regime and potentially increase the chances of a UN Security Council Resolution leading to Raisi’s capture and prosecution at the International Criminal Court.

But the former Attorney General went on to say that perhaps the best option for bringing Raisi to justice would emerge following a change of government driven by the Iranian people themselves. While emphasizing that any tribunal which convened afterward would have to be bound by the principles and standards of international law, Mukasey noted that it would have ample evidence to draw upon when prosecuting Raisi for the torture, murder, and denial of Iranians’ most basic rights.
This evidence is both historic and contemporary, extending from the time of his early career as a religious jurist to his more than two-year stint as judiciary chief, immediately preceding his promotion to the presidency. In that capacity, Raisi oversaw aspects of the regime’s crackdown on the November 2019 uprising. About 1,500 people were fatally shot within days of that movement emerging, and Amnesty International later reported that political detainees had been systematically tortured for months following mass arrests.
Amnesty duly condemned Raisi’s presidential “election” on June 19, calling it a prime example of the regime’s impunity in matters relating to human rights. And just ahead of Raisi’s inauguration, the human rights organization also highlighted the ways in which the international community has contributed to that impunity by maintaining ordinary relations with the Islamic Republic while turning a blind eye to its past crimes.
“The international community, including the EU, which is sending Enrique Mora to Raisi’s inauguration, must publicly demonstrate its commitment to fight against systematic impunity in Iran for extrajudicial executions and other unlawful killings, enforced disappearances, and torture,” Amnesty said in a statement, reiterating its prior call for an official inquiry into the 1988 massacre and related matters.

The int’l community, including the #EU, which is sending @enriquemora_ to Raisi’s inauguration, must publicly demonstrate its commitment to fight against systematic impunity in #Iran for extrajudicial executions & other unlawful killings, enforced disappearances & torture.

This call to action was echoed by each participant in Thursday’s panel discussion, as was Amnesty’s criticism of Mora and his superior EU officials for legitimizing Raisi’s rise to power. Lieberman described the presence of a European delegation at the inauguration as “truly disheartening,” and Robertson said that the EU’s decisions regarding Iran made it clear that the international body’s “human rights aspirations” are still far removed from its actual human rights policy.
In October 2020, the EU introduced its “Global Human Rights Sanctions Regime” and EU foreign policy chief Josep Borrell stated that the international community must take a broader approach to human rights, looking beyond mere resolutions. Since then, however, Borrell and other leading EU officials have remained targets of regular criticism from opponents of the Iranian regime. Many have pointed to its wariness of Magnitsky sanctions, despite these being a tool available to most of its member states.
Geoffrey Robertson said on Thursday that in light of Raisi being elevated to the presidency in spite of numerous and severe human rights violations, there is “no individual whose name should be higher on every country’s Magnitsky list” than Raisi.