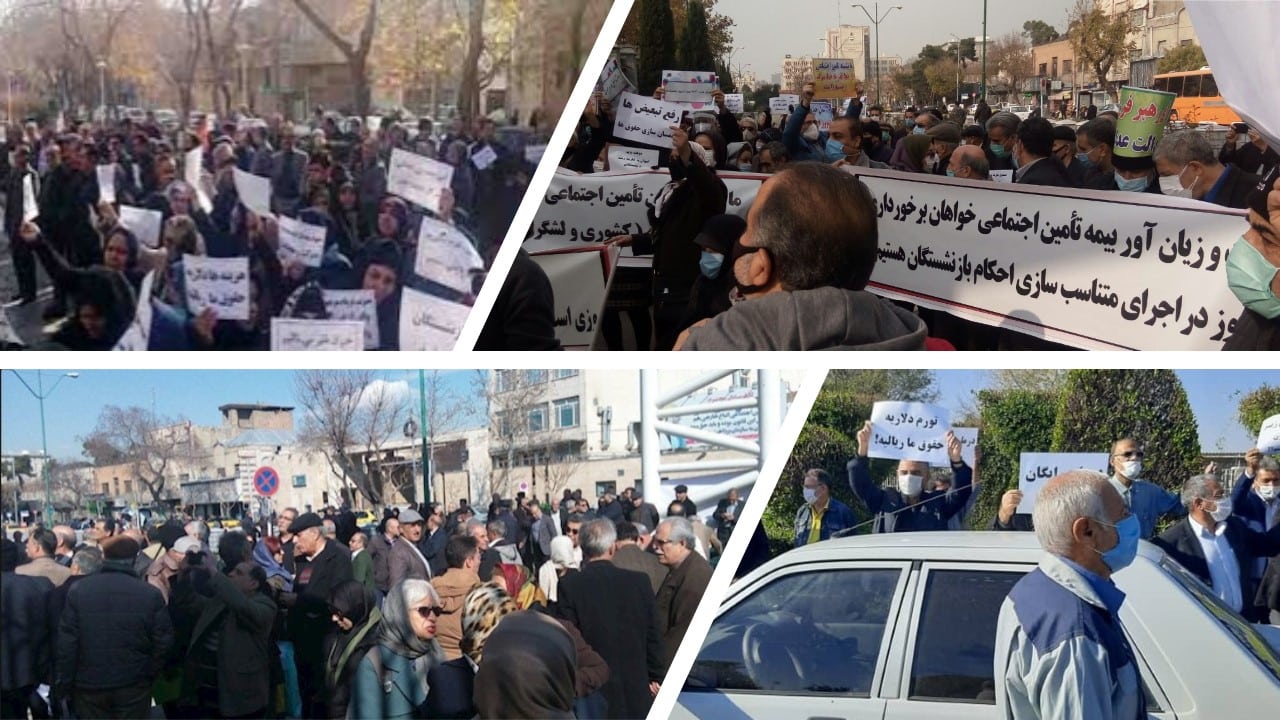 Retirees held rallies in over 17 cities across Iran on Sunday, for the seventh consecutive week. They are protesting low wages and the regime’s refusal to adjust their pensions based on the devaluation of the rial and the rampant inflation. What message do these protests send?

Retirees chanted slogans such as “The result of the government’s work is plundering the people’s wealth,” “Our country sits on treasures, but we are living in suffering,” and “Housing and livelihoods are our inalienable rights,” referring to the regime’s institutionalized corruption, which is the flip side of people’s poverty.

The protesters demanded the implementation of article 96 of the welfare law, which states that pensions must be adjusted to allow pensioners to procure their needs. The protesters are also demanding free health care for pensioners and the prioritization of the pensioners’ demands in the regime’s parliament sessions.

While the regime and its apologists try to blame United States sanctions for all of Iran’s crises, pensioners chanted: “Our enemy is right here, they lie when they claim it is the U.S.”

Pensioners’ protests are in line with other daily protests by all walks of life across Iran. These protests are spreading and intensifying.

The regime’s repressive apparatus, fearing the consequences of their actions, had not reacted to the pensioners’ protests for the last few weeks. It had only tried to intimidate protesters. But this week, the regime arrested several retirees in different cities, including in Tehran. The security forces attacked retirees but due to the protesters’ resistance, they had to back off.

The intensification, increase and spread of protests are signs of the society’s condensed hatred for the regime’s actions in the last four decades.

This is society where, “Selling babies has increased due to poverty, and retirees and low-income employees have eliminated meat, poultry, and fruit from their diets,” according to the state-run Arman daily on Sunday.

Iranians suffer from poverty, while they live in a country which “is one of the most important holders of minerals in the world, and with 68 types of minerals, 37 billion tons of proven reserves and more than 57 billion tons of potential reserves worth $770 billion in 2014, is among the 15 largest mineral–rich countries in the world,” according to the state-run Iran daily’s article published in June 2014.

Yet, due to the regime’s institutionalized corruption, “Vegetable oil is scarce in the country. Buying bread on credit and in installments has become a normal routine and the eyes of officials are used to watch the garbage-scavengers crowd,” wrote the state-run Arman on Sunday.

According to the Arman article, the money which the regime should spend for people goes to the regime’s affiliates who “With the increasing zeros of [their deposits in their] bank accounts, are forming the train of corruption, and luxury houses in Turkey, Greece, etc. are their holiday destinations.”

Yet, according to the state-run Jahane-e Sanat article on Sunday, “Workers’ wages hardly cover their expenses for a week, and employers say their backs are bent under rising inflation and they can no longer pay their workers.”

In the meantime, “At once the price of a house increases a thousandfold. In one night, people’s life savings become worthless with the devaluation of the national currency. Their salaries are in Rial, but they have to buy all the goods in dollars. People start living with more inflation than the day before. Even those who are not unemployed and receive salaries many times below the poverty line do not know whether they will be employed tomorrow or not,” the state-run Mostaghel daily wrote on Sunday.

These economic grievances and the regime’s actions have turned the society into a powder keg. This is why the regime’s Supreme Leader, Ali Khamenei, rushed to the scene on March 5, shedding crocodile tears for people’s livelihood.

In addition, on Sunday, the regime’s President Hassan Rouhani acknowledged the regime has failed in deceiving people.

While he is the regime’s president, he complained that “price management is not done properly and has put pressure on people’s lives.”

“The current situation in the country, especially the economic situation and the livelihood of the people, requires that differences be minimized. Destructive and pessimistic waves should not be sent to society through wrong actions, behaviors, and words that undermine the security and social trust of the people,” he added, warning the rival factions over the rising infightings for having more share of power.

The regime tried to use the Covid-19 outbreak to quell society through cover-up and inaction in the face of this deadly virus. But the ongoing protests show the regime’s plan has failed.

The regime has two options.:

In other words, the regime knows that these protests and their increasing leaps to a point and an uprising will erupt. This uprising will be more volatile and heavier than the ones in January 2018, and November 2019, which rattled the regime’s foundations.

Iran Is on the Cusp of a New Era, More Uprisings Are on the Horizon

Iran Protests and the Unstable Regime of the Mullahs