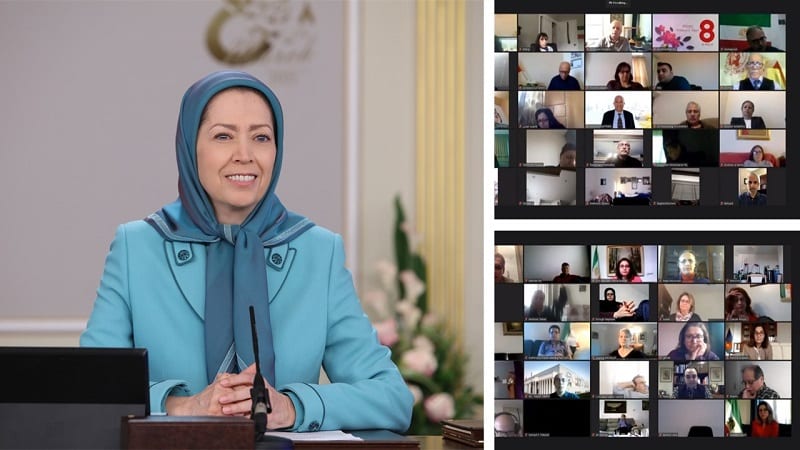 As the world marked International Women’s Day on Monday, the Women’s Committee of the National Council of Resistance of Iran co-hosted an online conference to highlight both the institutionalized gender discrimination in Iran and the central role of female activists in an ongoing effort to remove the country’s theocratic dictatorship and establish a democratic system of government. Representatives of the NCRI were joined in the conference by Western lawmakers and human rights experts including the International Committee of Parliamentarians for a Democratic Iran and the British Committee for Iran Freedom.

The event prominently featured an address by Mrs. Maryam Rajavi, the President-elect of the NCRI. Mrs. Rajavi introduced the topic by noting that this year’s Women’s Day celebration was taking place against the backdrop of protracted unrest inside Iran, specifically in the southeastern-most province of Sistan and Baluchistan.

This she described as “an uprising with dozens of martyrs, where young people bravely attacked the Governor’s building and centers of the Revolutionary Guards and the State Security Force.” Furthermore, Mrs. Rajavi said that these actions “demonstrated the Iranian people’s resolve to overthrow the regime” and formed part of an unbroken chain of activism and unrest stretching back at least to December 2017.

It was then that a protest broke out in the city of Mashhad over worsening economic indicators, then sparked a movement that quickly encompassed over 100 cities and towns. As the protest movement grew, it shifted focus from economic grievances to outright calls for regime change, with hundreds of thousands of participants chanting slogans such as “death to the dictator” and “reformists, hardliners, the game is over.”

In recent years, women have been excluded from certain workplaces, and authorities have cracked down hard on alleged violations of the country’s forced veiling laws. Toward that end, the regime has increased the presence of so-called “morality patrols” in major cities – an easy undertaking in a country that maintains 27 different institutions for the express purpose of monitoring citizens’ behavior and determining whether it is in line with the theocracy’s fundamentalist and misogynist view.

The scale of that enforcement was certainly a major point of interest for Monday’s conference, and it was repeatedly referenced both as an explanation for the centrality of female activists in the Resistance movement and as a basis for praising their resilience in the face of arguably overwhelming odds. “Women took leadership roles to not only fight for their own rights but to lift their nation from the dark depths of a medieval regime,” said Baroness Eaton, of the British House of Lords, who credited the event with raising the profile of women’s rights issues in Iran but also urged Western policymakers to move on from the mere discussion of those issues by actually taking action in support of women who are currently struggling against the mullahs’ rule.

Eaton specifically recommended that the international community downgrade or sever diplomatic relations with the Iranian regime and make future movement steps back toward the status quo conditional upon substantial changes in the Iranian regime’s behavior, especially where human rights and the rights of women are concerned. A number of other speakers echoed this call to action on Monday, with some also suggesting that the United Kingdom and the European Union impose the formal label of terrorist organization upon abusive entities such as the Islamic Revolutionary Guard Corps and the Iranian Ministry of Intelligence and Security.

These institutions are primarily responsible for the massive population of political wards in Iranian prisons, and as Monday’s speakers noted, a remarkable number of political prisoners are women.

In advance of its Women’s Committee’s event, the NCRI released a brief on women’s issues which highlighted the plight of several female political prisoners. Some had seen their loved ones arrested alongside them without cause, and some had been allowed to contract Covid-19 during a period when some convicted criminals were released on furlough but political prisoners were largely kept behind bars in increasingly difficult conditions.

The brief identified 57-year-old Zahra Safaei as having been sentenced to eight years in prison in January, with her daughter Parastoo Mo’ini and her son Mohammad Massoud Mo’ini being sentenced to six years each. It noted that another woman, Farangis Mazloum was placed in solitary confinement and subjected to torture in 2019, then later sentenced to six years in prison simply because she was the mother of another political prisoner, Soheil Arabi. And of a 33-year-old mother of one Massoumeh Senobari, the NCRI says her family outside prison was subjected to their own torment by having their shipments of medicine blocked, thereby raising the odds of her dying of Covid or a preexisting heart condition.

These examples appear to have been drawn more-or-less at random, while the NCRI said of the situation more generally: “Since the 1980s, thousands of Iranian women have been arrested, tortured and killed.” These numbers have naturally increased right alongside an increase in the regime’s efforts to repress social and political dissent as a whole. In fact, Reuters has reported that 400 women were among the estimated 1,500 casualties from a series of shooting incidents involving the Revolutionary Guards in November 2019.

Although Tehran has kept the death toll secret, some officials and state media outlets have effectively confirmed that women played a leading role in the protests that sparked those killings. The regime’s Interior Minister, for instance, said that in Tehran, “each team of four, five or six people were being led by a woman.”

Those protests were widely regarded as a direct follow-up to the December 2017 uprising, insofar as they featured the same general messaging but spread it to an even more socially and geographically diverse venue of nearly 200 cities and towns. The size, scale, and broader context of that uprising suggest widespread enthusiasm for the platform of the NCRI, which was largely credited with organizing the demonstrations – a platform that includes gender equality and separation of religion from the state.

In light of the apparent domestic popularity of the Iranian Resistance movement, Lord Alton used his speech at Monday’s event to “call on the United Kingdom government and the international community to recognize the NCRI and its democratic platform for a future Iran and to support them as the real expression of the democratic aspirations of the Iranian people.”

Meanwhile, Mrs. Rajavi urged the same entities to simply support Iranian women as they lead the Resistance movement in presenting an increasingly direct and serious challenge to the mullahs’ regime. “I urge all advocates of gender equality across the world to support the arisen women of Iran and the Iranian people’s uprising for freedom,” she said.