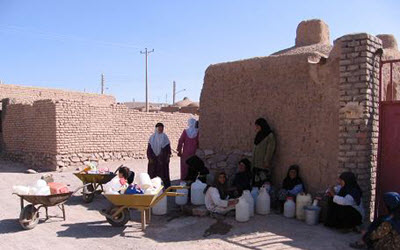 In their 160-page joint report on Iran’s water crisis, the two science foundations have warned that “ever more regions in Iran are becoming uninhabitable.”

Participated by more than 30 German environmentalists as well as academics from both Germany and Iran, the summit was aimed at discussing the 160-page report and the Iranian regime’s role in such a major environmental disaster.

The joint report by the two European foundations begins with “ever more lakes and rivers are threatened by drought.. There’s also an increasing reduction in the depth of the country’s groundwater resources”, and while pointing to the drying of Lake Urmia, the report adds that “Lake Urmia, the biggest lake in the Middle East, has lost 12 percent of its area in recent years. This amount is equal to the area of Lake Constance (Bodensee) located in Southern Germany which, with an area of 240 square kilometers, is divided between three countries of Germany, Switzerland and Austria.”

According to this report, what is referred to as Iran’s environmental crisis is actually a manmade crisis. The report says that the main cause of the current crisis is the indifference and inaction of regime’s officials and incorrect exploitation of the country’s water resources. On the other hand, Iran’s too outdated irrigation technique, has caused the farmers and poor peasants to suffer the most from water scarcity.”

Later in their report on Iran’s water situation, Heinrich Boll and Small Media foundations add that “the rise of civil movements and grassroots activities in social media in recent years has raised the social awareness in this regard. The environmental activists, however, tend to intentionally hide their identities in cyberspace as there’s oppressive restrictions in these areas as well.”

Previous articleArab Countries Should Defy Iran Regime and Its Interference
Next articleIRAN: Public Execution of Four Young Men of 22-26 Years Old in One Day