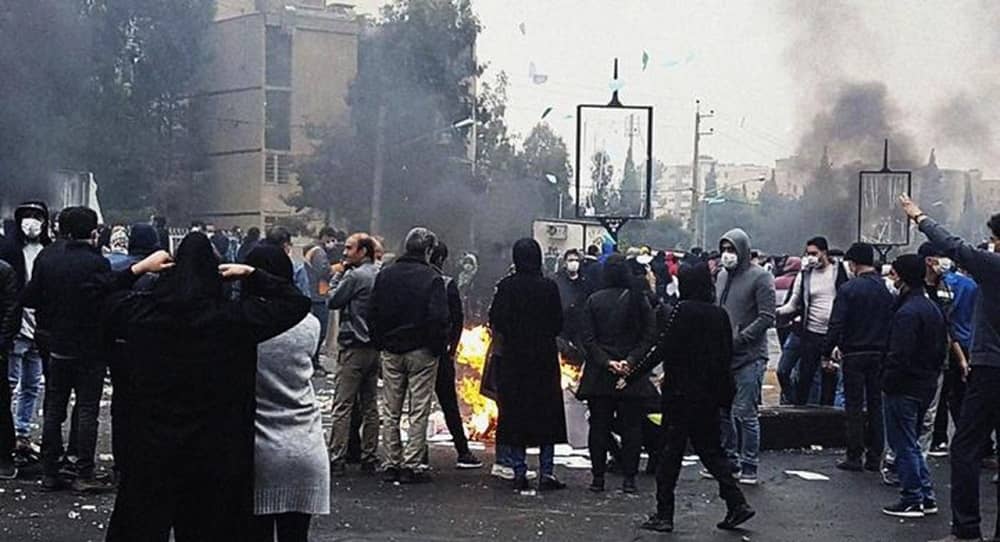 As the people of Iran grapple with different economic and social crises, state-run media warns about the regime’s “security” being jeopardized.

“The Vice President warned that if we fail to address challenges and problems, they will become complicated issues,” wrote the state-run Jahan-e Sanat on July 11.

“Today, the water crisis is one of the biggest problems in the country. When the rumor of water transfer from one place to another spreads, it immediately becomes a political and security issue. In Iran, for various reasons, this feeling and the need for internal security are not high. The shortcomings of the government decision-making system in all post-war governments and the repeated breaking of promises by the [regime]have led to public mistrust. Iranians do not have peace and feel that they have not been provided with sufficient security,” Jahan-e Sanat added.

The regime’s concern about the consequences of the water crisis became real when on Thursday, July 15, dozen cities in southwest Iran witnessed protests by locals to water shortages and the regime’s inaction.

Iran: In Hamidiyeh, people rallied in the streets, despite the heavy presence of repressive SSF force. They chanted slogans against the regime officials and protested the continuous water cut.#Iran #IranProtests pic.twitter.com/6BWzLs3Vuf

In addition to the social and environmental crises, Iranians are under heavy economic pressure due to the regime’s corruption and malign policies. People face skyrocketing prices of consumer goods. Instead of helping people, the regime continues increasing the prices of goods.

“The Minister of Agriculture Jihad recently announced the approval of the price of 6400 Tomans of raw milk, which is about 47% more than before. This will make the possibility of a 70% increase in dairy prices in the coming weeks much more serious,” wrote the state-run Jahan-e Sanat daily on July 11.

“A 47% increase in the price of raw milk is a topic that will inevitably lead to new developments in the dairy market and skyrocketing prices. Due to the fluctuations in the market of livestock inputs, drought, high temperatures, and the deficit in the supply of forage, the scarcity of meat will be a challenge that will occur after the unreasonable increase in dairy prices. Together, these challenges will inevitably lead to a more severe decline in per capita consumption of dairy and protein and will also affect people’s health,” Jahan-e Sanat article adds.

“These days, the Iranian people stand in queues a lot. Sometimes the oil queue, sometimes the rice queue, sometimes the chicken queue and the baby diaper queue or baby milk powder queue, and the vaccine queue. Of course, power outages must be added to this list. But these alignments are directly related to the people’s social class.  Because, for example, someone standing in the chicken queue has the money to buy chicken,” wrote the state-run Hamedli daily on July 11.

“Hence the family of people like Nazanin, the little Sistani girl whose cries for not having water wrenched many people’s hearts,  are not going to experience queuing to buy meat and poultry because of poverty and being among the lower classes of society,” Hamdeli article adds.

“What is less talked about is the damages and catastrophes of dubious mistakes that are in the interests of the mafia. Iran’s economy is now being held hostage to their interests, and the people, producers, the government, and the future of Iran’s development pay the price of the [state-affiliated] mafia controlling Iran’s economy,” wrote the state-run Etemad daily on July 13, referring to the regime-affiliated mafia.

“The next issue is that corrupt relations increase all kinds of unjustified inequalities. When inequalities increase in a system while the government gives promises of justice, there will be a crisis of legitimacy,” wrote the state-run Etemad daily, underlining that the regime has lost its legitimacy.

The ongoing protests in Iran and the national boycott of the regime’s sham presidential elections confirmed the regime had lost its legitimacy and people want regime change. This is the core message of the daily Iran protests that the international community should understand and recognize the Iranian people’s desire for regime change.

Previous articleIran News in Brief – July 16, 2021
Next articleProtests in Southwest Iran Due To Water Crisis