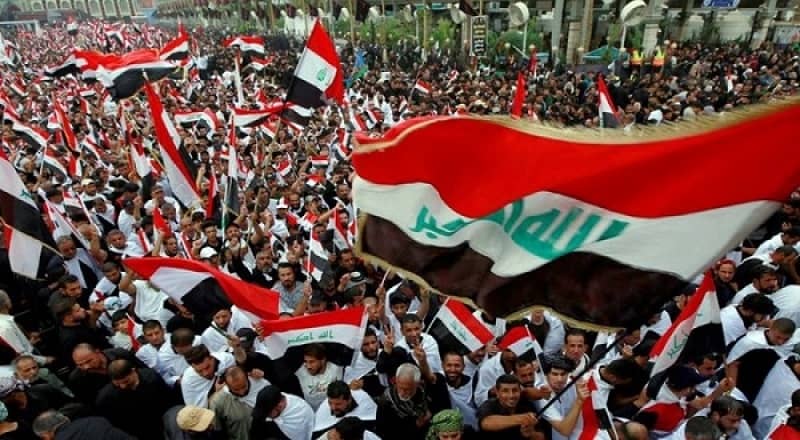 All walks of life in different cities across Iraq participated in Thursday’s protests. University students in Baghdad, the Iraqi capital, chanted slogans against the Iranian regime and its terrorist proxy groups and affiliated corrupt officials, while holding pictures of the martyrs of their uprising.

Participants at all these protests across Iraq underlined that they will not stop their protests until they achieve their goals and put an end to the Iranian regime’s ominous presence in Iraq.

The regime has described Iraq, Syria, and Lebanon as its “strategic depth” as one of its pillars to stay in power. The main role of the regime’s Revolutionary Guards (IRGC) and its Quds Force, with Qassem Soleimani as its commander, was to preserve this strategic depth. The mullahs’ regime plundered national wealth for fortifying its “strategic depth,” and carried out its schemes through its terrorist proxy groups.

Iraq, with its Shi’ite majority was most important to the regime. The regime’s ambassador to Iraq, Iraj Masjedi, has been acting as Iraq’s secret governor. Soleimani and Masjedi played a key role in suppressing the Iraqi people’s uprising and killing innocent civilians by using the regime’s proxy groups such as the Badr Brigades, Kataib Hezbollah and the Popular Mobilization Forces (PMF).

Regarding the Quds Force’s activities in Iraq, the National Council of Resistance of Iran (NCRI), in an exclusive report, wrote: During the Iran-Iraq, Mohsen Rezaei, then-commander of the Revolutionary Guards, gradually tried to cover all of the regime’s terrorist activities abroad and communicate with the foreign groups supported by the regime, so he took these forces under his command. This was the first serious step taken by the IRGC to completely encompass the terrorist, war-mongering, and interventionist activities of the regime abroad. For this purpose, Rezaei formed the 9th Badr Brigade, which consisted of some Iraqi war prisoners and those expelled from Iraq. Hadi Ameri, the Badr group’s current head, is one of the most critical groups forming the Iraqi Al Hashd-al Sha’bi.

The regime’s current ambassador to Iraq, Iraj Masjedi, has direct relations with so many leaders of the groups that make up the Popular Mobilization Forces. One of these groups is the Harakat Hezbollah al-Nujaba. The United States included Harakat Hezbollah al-Nujaba and its leader Akram-al-Kaabi on its sanctions list on March 5, 2019. Masjedi officially met with the leader of this group, Akram-al Kaabi, on June 26, 2019.

As to the regime’s funding of its proxy groups in Iraq, it is enough to point to one example. According to the regime’s Daneshjoo (Student) news agency, on Jun 2020, Muhannad al-Aqabi, head of the PMF’s information and relation said: “When All countries abandoned [us] in fight against terrorism, Iran stood by on our side.” All the while, the Human Rights Watch, on January 31, 2016 wrote: “Members of Shia militias, who the Iraqi government has included among its state forces, abducted and killed scores of Sunni residents in a central Iraq town and demolished Sunni homes, stores, and mosques.” This was PMF’s so-called “fight against terrorism.”

The regime uses its proxy terrorist groups to spread fear across the Middle East and continues its blackmailing campaign through terrorist activities.

Protests in Iraq and a change in the balance of power

The Iraqi people’s uprising and the nationwide Iran protests in 2019 have shocked the regime. In response, and to restore its lost hegemony, Tehran launched several attacks against the United States in Iraq; trying to divert Iraqi people’s attention from the real enemy, which is the Iranian regime and its proxy groups. However, when during one of the regime’s operations an American got killed, the mullahs’ regime received an irreparable blow. The U.S. killed Qassem Soleimani and Abu Mehdi Al-Muhandis, head of the PMF, in a drone strike.

The regime had made a miscalculation. In fact, the major Iran protests and Iraqi people’s uprising had changed the balance against the regime. The Iran protests in November represent a coup de grâce to the Western policy of appeasement. The regime’s President Hassan Rouhani acknowledged as much when he pointed to the U.S. withdrawal from the nuclear agreement in 2018 as one sign of a sea change in America policy. When the Iran protests effectively spread to Iraq and Lebanon, it demonstrated that the Iranian regime’s strategic depth had shattered. In fact, these uprisings, particularly in Iran, demonstrated the emptiness of the regime’s hollow show of power.