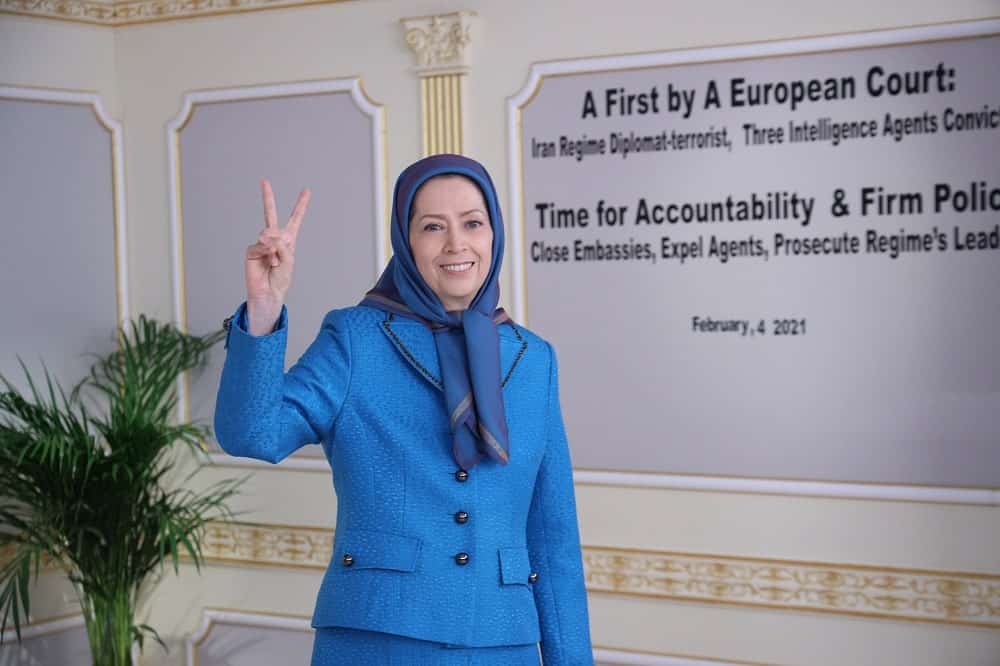 A court in Antwerp, Belgium, sentenced Iran’s incarcerated diplomat-terrorist Assadollah Assadi to 20 years in prison on terrorism charges. This is the first time a diplomat on duty receives such a sentence.

The court also sentenced Assadi’s co-conspirators, Nasimeh Naami, Mehrdad Arefani and Amir Saadouni to 18, 17, and 15 years in prison respectively. The four convicts had attempted to bomb the annual “Free Iran” gathering, organized by the National Council of Resistance of Iran (NCRI) in 2018 in Paris.

Based on the undeniable evidence and over two-and-a-half years of investigations, the prosecutors concluded that the 2018 bomb plot was not Assadi’s personal initiative but rather an act of state-sponsored terrorism.

Thus, Assadi’s trial could serve as a turning point in Europe-Iran relations. This fact was confirmed by several prominent political figures from both sides of the Atlantic who attended an online event concurrent with Assadi’s sentencing. Many of these speakers were present at the 2018 “Free Iran” rally.

Former Colombian Senator and Presidential Candidate, Ingrid Betancourt, who was previously a victim of terrorism and spent six years in captivity, called Assadi’s conviction “a victory for all the victims of terrorism around the world.”

Ms. Betancourt also underlined that the court’s ruling is “a turning point in history because justice prevailed in spite of the regime’s criminal attempts to avoid justice.”

Ex-Colombian Senator Ingrid Betancourt: This is a victory for all the victims of terrorism around the world. Because for the first time in history a diplomat from a terrorist state has been convicted. #Iran #EUTime4FirmIranPolicyhttps://t.co/DBdSVzV2vM

The Iranian regime had tried in many ways to prevent Assadi’s conviction. Tehran mostly insisted on Assadi’s so-called diplomatic immunity which was rejected several times by the courts, and it was rejected again on Thursday. The regime also put diplomatic pressure on European countries. When that didn’t work, Assadi directly threatened the investigators with possible retaliation by Tehran’s proxy “armed groups” in the Middle East.

The mullahs’ next measure was to take dual nationals hostage in Iran. Before the trial, the regime announced that it would be executing one of the hostages Ahmad Reza Djalali. The Belgian judiciary also acknowledged that the regime had proposed prisoner swaps, which Belgium had rejected.

The regime’s attempts to have Assadi liberated further confirmed that the 2018 terrorist plot was indeed an act of Tehran’s state-sponsored terrorism.

Giulio Terzi, former Italian Foreign Minister, confirmed this fact in his speech during Thursday’s conference. “The judges have established that Assadi was acting on behalf of the leaders of the Iranian regime,” he said, adding: “This shows the unity between the so-called hardline and reformist factions in the regime.”

Mr. Terzi highlighted the role the regime’s Foreign Minister Mohammad Javad Zarif and his ministry played in implementing and facilitating the 2018 bomb plot.

.@GiulioTerzi: EU's lack of proper action has emboldened #Iran regime in its terrorist activities, giving them the impression that they will not be held accountable. Today is the day for a new approach to tackle the terror regime. #EUTime4FirmIranPolicyhttps://t.co/0W2leRZXRZ

“The Iranian regime has been engaged in acts of terrorism for over 40 years, but this is the first time a diplomat has been caught red-handed. It is clear that the entire regime, including Zarif, was involved,” he said.

Ex US NSA Gen. James Jones: The Europe and U.S. must condemn the regime for this act. We should downgrade diplomatic relations close regime embassies & centers. Hold minister Zarif accountable for the terrorism of his ministry.#ShutDownIranTerrorEmbassies https://t.co/pmkrZEyXS3

Assadi’s trial and his conviction show the regime’s desperation. It also shows that the regime feels threatened and desperate to counter its democratic alternative. Therefore, the regime is prepared to take enormous risks

Tom Ridge, a former U.S. Secretary of Homeland Security and former Governor of Pennsylvania, confirmed the latter fact, underlining that “the NCRI is an immediate threat to the repressive Iranian regime.” He added that the NCRI is “the largest, best organized and most popular democratic alternative to the regime.”

While commending the Belgian authorities and judicial system for their courage to convict Assadi and other terrorists, Governor Ridge urged Western democracies to embrace the court ruling and condemn the regime’s state-sponsored terrorism. However, he underlined that “rhetorical condemnation without further action will be of little impact on this rogue regime, which heretofore has been totally unwilling to change its behavior.”

Governor Ridge also underlined: “For those countries who want to repudiate Iran’s terrorism, the most important action they can take is to simply recognize the NCRI as the embodiment of the Iranian people’s aspirations and hopes for freedom.”

.@GovRidge: The NCRI is an immediate threat to the repressive #Iran regime. Int'l Community should recognize NCRI publicly . It's the ultimate condemnation of #Iran action. #EUTime4FirmIranPolicyhttps://t.co/jqUJuy9vDO

This call comes in the wake of new hopes of negotiations between Iran and the U.S. since the new administration assumed office in January. The European Union leaders have been promoting negotiations with the regime, particularly with its chief apologist Zarif.

The court ruling on Thursday and Assadi’s case in general suggests that the push for negotiations with Iran’s regime, particularly Zarif whose diplomat was convicted, would further endanger the safety of Western cities and embolden Tehran.

Former U.S. Democratic Senator Robert Torricelli weighed in on this issue, underlining: “Continuing diplomatic relations with Iran in the face of what might have been is to ignore reality.” He added: “Countries have serious thinking to do. If the intent of the Biden administration is to re-engage with Tehran on nuclear negotiations, they must consider who will be sitting across the table. Zarif? His agents? People who were sent to kill us?”

.@bobtorricelli: If the intent of the Biden administration is to re-engage with Tehran on nuclear negotiations, they must consider who will be sitting across the table. Zarif? his agents? People who were sent to kill us? #Time4FirmIranPolicyhttps://t.co/evcXZk7BQU

In other words, Assadi’s trial marks an end to deceptions by both factions of the regime to cover up their roles in terrorist crimes and shows when it comes to savagery and pure evil, “moderates” and “hardliners” constantly try to upstage one another. There is absolutely no daylight between the regime’s institutions when it comes to committing crimes and terrorism.

Zarif has recently acknowledged his close ties with the regime’s eliminated terror mastermind Qassem Soleimani and that he coordinated his actions with him.

Now the time has come for the Western countries to take serious action over the regime’s rampant terrorism. Ambassador Robert Joseph, former U.S. Undersecretary of State and Special Envoy for Nuclear Nonproliferation, highlighted: “Now that the verdict has been handed down by the court, the judiciary has finished its work. It’s now time for the governments to act decisively.”

Amb. Robert Joseph: Now that the verdict has been handed down by the court, it's time for the governments to act decisively. further concessions to the regime will only bring more injustice to the Iranian people.https://t.co/vlQNlKQFpK

As Mrs. Maryam Rajavi, the NCRI’s president-elect and the primary target of the 2018 bomb plot, underlined on Thursday: “Beyond its legal repercussions, the ruling by the Court of Belgium bears certain obligations for Europe and the international community.”

Our objective was neither to receive reparations, nor to retaliate or take revenge. Rather, we want the machinery of terrorism and suppression of our people dismantled and replaced by our people's sovereignty and universal suffrage. #EUTime4FirmIranPolicyhttps://t.co/cTlqn6CJXg pic.twitter.com/ZAt4i7nbaX

Mrs. Rajavi underlined that, “as prominent western parliamentarians and dignitaries have declared, the Iranian Resistance once again calls on governments of Europe to change their approaches and policies: