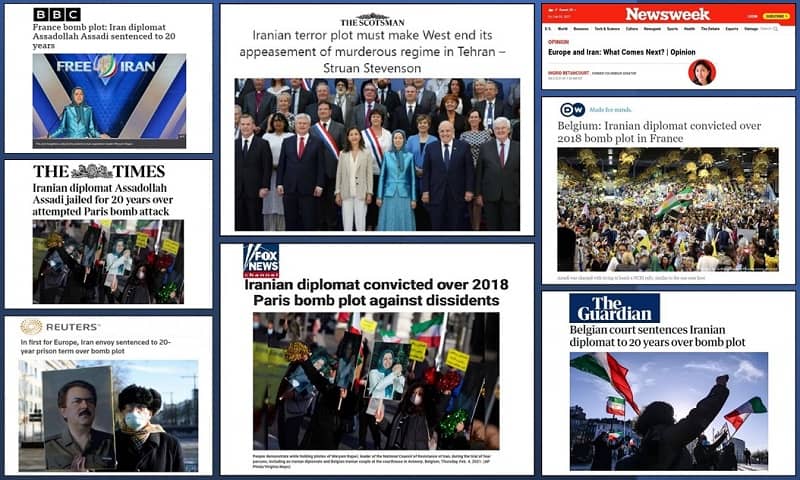 A court in Antwerp, Belgium sentenced Iran’s diplomat-terrorist Assadollah Assadi and his three accomplices to a total of 70 years in prison. Assadi’s conviction received vast coverage in the international media.

The Belgian court rejected Assadi’s claim of diplomatic immunity and sentenced him to 20 years in prison. The other three agents of the Iranian regime, Nasimeh Naami, Mehrdad Arefani, and Amir Saadouni, were sentenced to 18, 17, and 15 years in prison, respectively. Their Belgian citizenship was also revoked. Assadi and his agents attempted to bomb the annual “Free Iran” gathering of the National Council of Resistance of Iran (NCRI) in 2018 in Paris.

The following are some of the media coverages of Assadi’s conviction: 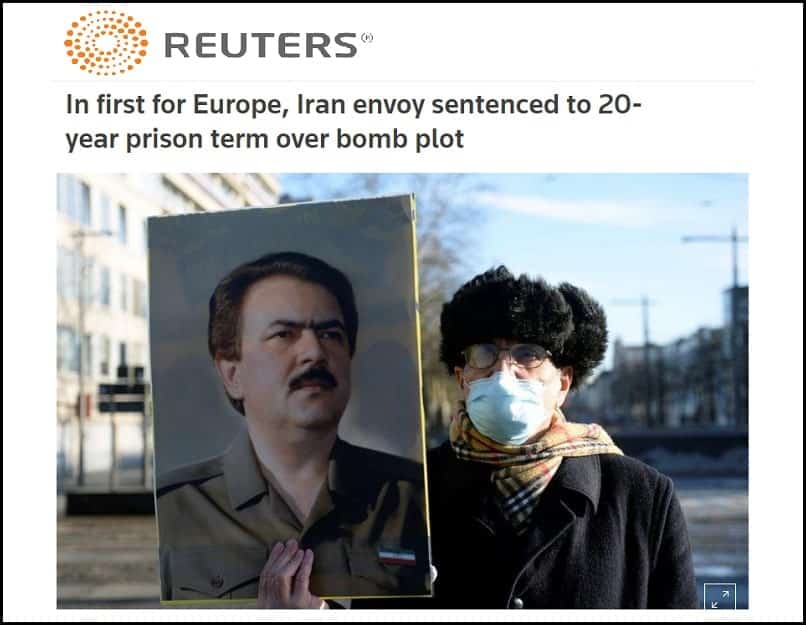 Assadolah Assadi was found guilty of attempted terrorism after a foiled plot to bomb a rally of the National Council of Resistance of Iran (NCRI) near Paris in June 2018, Belgian prosecution lawyers and civil parties to the prosecution said.

The third counsellor at Iran’s embassy in Vienna, he was arrested in Germany before being transferred to Belgium for trial. French officials said he was running an Iranian state intelligence network and was acting on orders from Tehran.

In an interview with Reuters, NCRI chief Maryam Rajavi called the ruling a turning point as it proved Iran was carrying out state-sponsored terrorism. She said the EU could not stand by without reacting even if some in the 27-nation bloc were pushing for more dialogue with Tehran.

“Silence and inaction would be the worst policy and embolden the regime in its behaviour,” she said, speaking through an interpreter, calling for EU sanctions on key officials, including Foreign Minister Mohammad Javad Zarif, who heads up nuclear diplomacy with the major powers.

“The European Union and governments must hold the regime accountable,” Rajavi said. 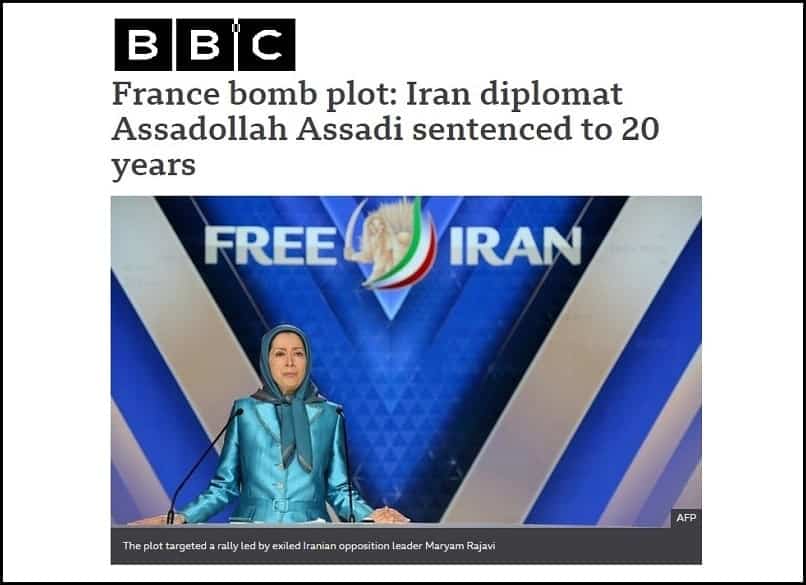 Maryam Rajavi, the leader of the group targeted by the plot, described the conviction as “a brilliant victory for the people and resistance of Iran and a heavy political and diplomatic defeat for the regime”.
In a statement she claimed the plot had been authorised at the highest levels in Iran, by the president and supreme leader and that the intelligence ministry had been given the task of carrying it out.

British former senior government minister Theresa Villiers was at the rally – in support of a constiuent whose wife was murdered in Iran. She told me was “astonished” by the plot and that there could have been a “terrible” death toll. 6/ pic.twitter.com/24C6BSXUi3 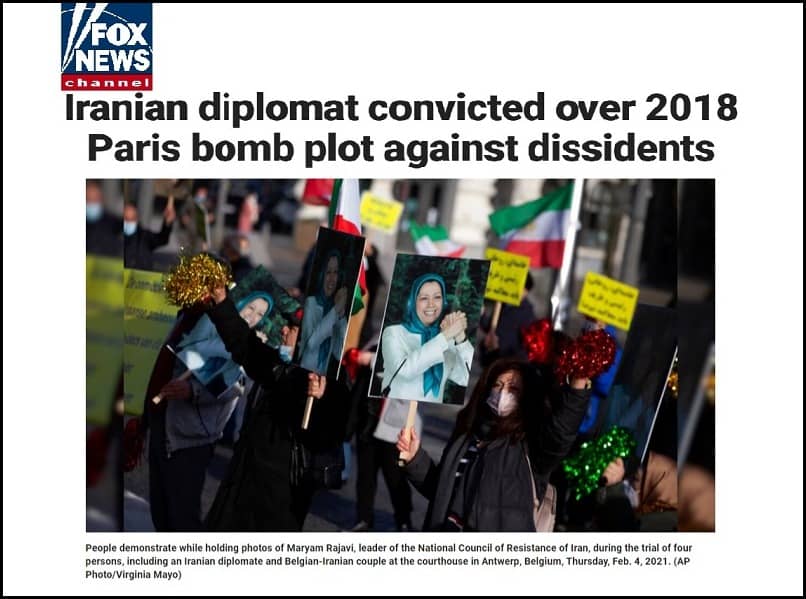 Prosecutors identified Assadi as the alleged “operational commander” of the planned attack and accused him of recruiting a couple to deliver the bomb. Assadi is believed to have carried the explosives to Austria on a commercial flight, and handed the bomb to them in Luxembourg. The ruling said that the explosives were made and tested in Iran.

NCRI’s president-elect, Maryam Rajavi, told Fox News in an interview that the plot was planned and approved by officials — including Supreme Leader Ali Khamenei and President Hassan Rouhani — and said the trial shows that what she called a “policy of appeasement” had emboldened the leaders.

After the verdict, Rajavi called on European countries to respond to the plot — one of a number believed to have been ordered by the regime.

“The time has come for the European Union to take action. Silence and inaction under whatever pretext will only embolden the mullahs’ regime to continue its crimes and terrorism,” she said. 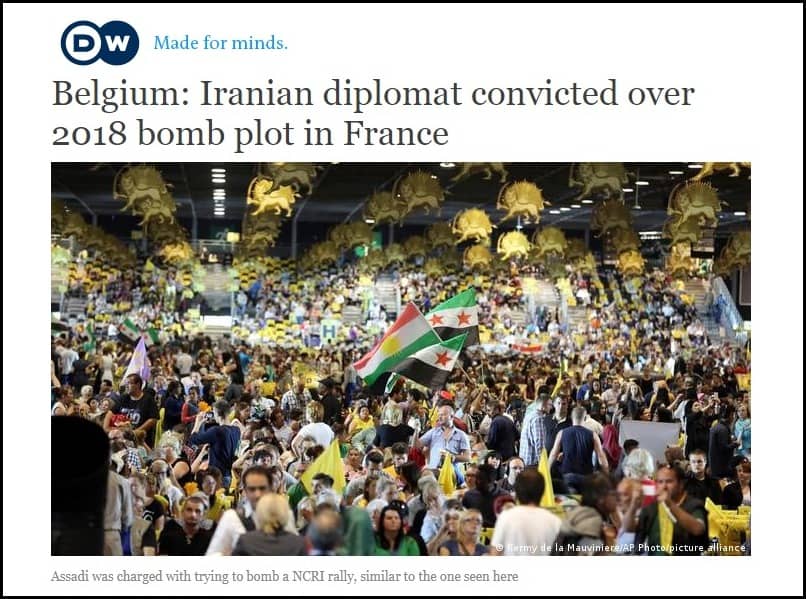 Iranian diplomat Assadolah Assadi was convicted of attempted terrorism Thursday by a court in Belgium for his role in a 2018 bomb plot targeting an Iranian opposition group in France. He was sentenced to 20 years in prison.

The court ruled that Assadi and three others sought to kill top leaders of the National Council of Resistance of Iran (NCRI) during a rally near Paris. The plot was uncovered ahead of time by German, French and Belgian police. 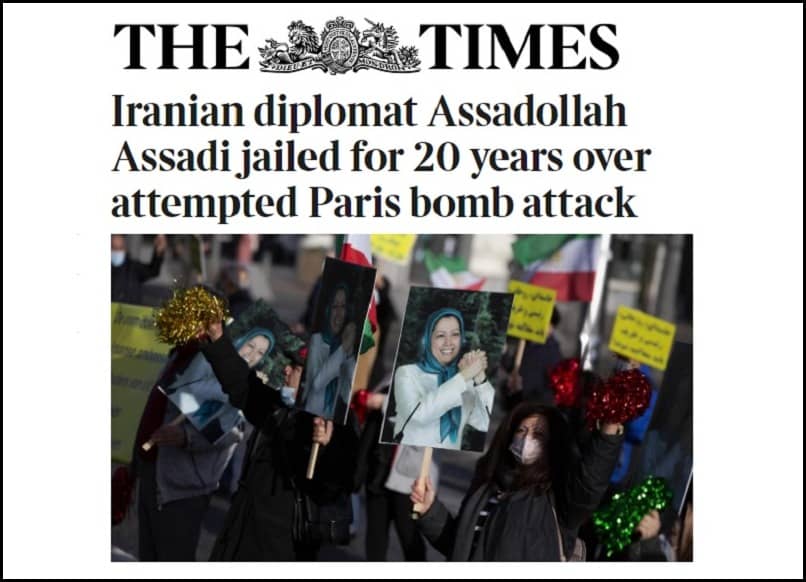 In its ruling the court made clear that Iran was not on trial, but insisted that the quartet of defendants were members of a cell operating for Iran’s intelligence services gathering information about the opposition group to identify targets and set up an attack.

Among dozens of prominent guests at the opposition rally that day were Trump’s lawyer, Rudy Giuliani; Newt Gingrich, the former conservative speaker of the US House of Representatives; and the former Colombian presidential candidate Íngrid Betancourt. Five British MPs were also there: the Tories Bob Blackman, Matthew Offord, Theresa Villiers and Sir David Amess, and Labour’s Roger Godsiff. 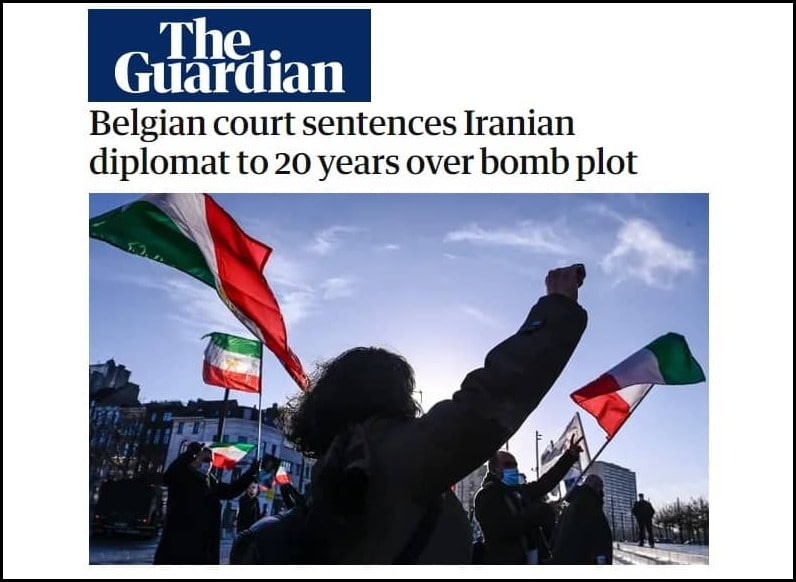 An Iranian diplomat who masterminded a failed bomb attack at a rally outside Paris attended by five British MPs has been sentenced to 20 years in jail by a Belgian court for attempted murder and involvement in terrorism.

Assadollah Assadi, 49, had been attached to the Iranian mission in Vienna when he supplied explosives for the intended atrocity at an Iranian opposition rally in France in 2018.

Newsweek: Europe and Iran: What Comes Next?

By Ingrid Betancourt – Assadollah Assadi, an active Iranian diplomat to Austria, was sentenced to 20 years in prison for plotting to blow up a major gathering of thousands of Iranian opponents near Paris in 2018 and aiming to murder Maryam Rajavi, the president-elect of the National Council of Resistance of Iran (NCRI). I happened to be there along with hundreds of worldwide political figures and human rights activists attending the rally.

This regime is distinctly misogynous and repressive. It has executed tens of thousands of its political opponents and it is the world’s leading executioner per capita of its own citizens.

The Scotsman: Iranian terror plot must make West end its appeasement of murderous regime in Tehran 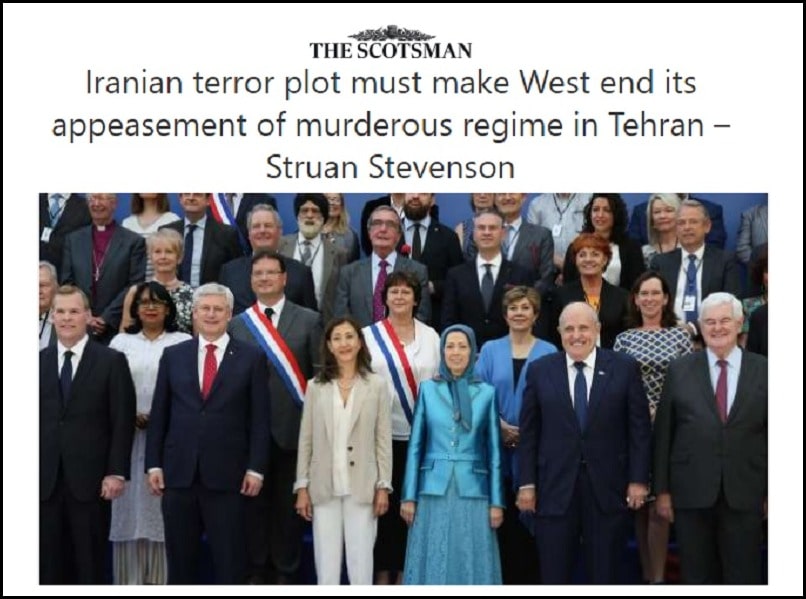 By Struan Stevenson – This is not some Hollywood fantasy, but reality. A Belgian court has just passed sentence on four Iranians who were involved in a plot to kill and maim hundreds of people at a rally of the National Council of Resistance of Iran at Villepinte near Paris in June 2018.

There were dozens of Americans and Europeans at the rally, including well-known politicians like Newt Gingrich, ex-speaker of the US House, Theresa Villiers MP, a former UK Cabinet minister, and Stephen Harper, former Prime Minister of Canada. I was there myself and was a plaintiff at the trial in Antwerp on Thursday, sending recorded evidence.

It is time for a complete change of direction in US, EU and UN policy towards Iran. The people of Iran expect the West to be on their side.

They expect their calls for democracy to be taken seriously. The appeasement policy, lamely followed by the EU, is dead in the water. 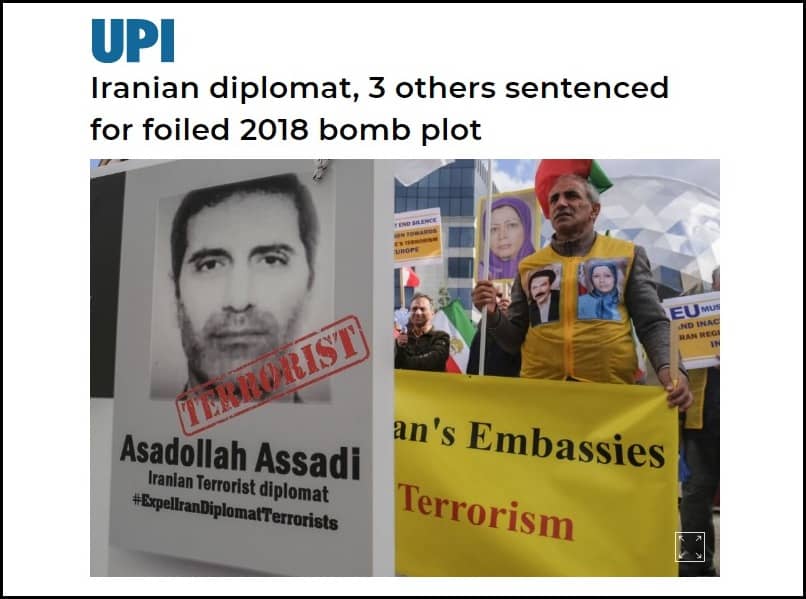 Investigators said Assadi was believed to be an employee of the Iranian intelligence ministry MOIS, which monitors opposition groups.

Assadi’s attorneys argued at trial that diplomatic immunity protected him from arrest and extradition, but a judge ruled that such immunity didn’t protect him outside of Austria. 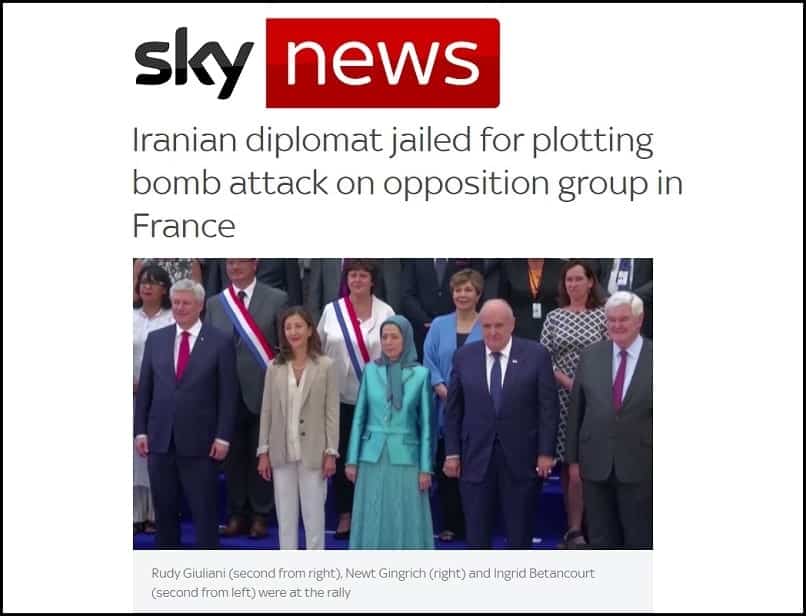 A diplomat has been jailed for planning a terror attack against an exiled Iranian opposition group in France after a bomb was found hidden in a Mercedes.

Assadollah Assadi, who was based at Iran’s Austrian embassy, was denied diplomatic immunity because he was on holiday in Germany when he was arrested. He has now been sentenced to 20 years in prison. 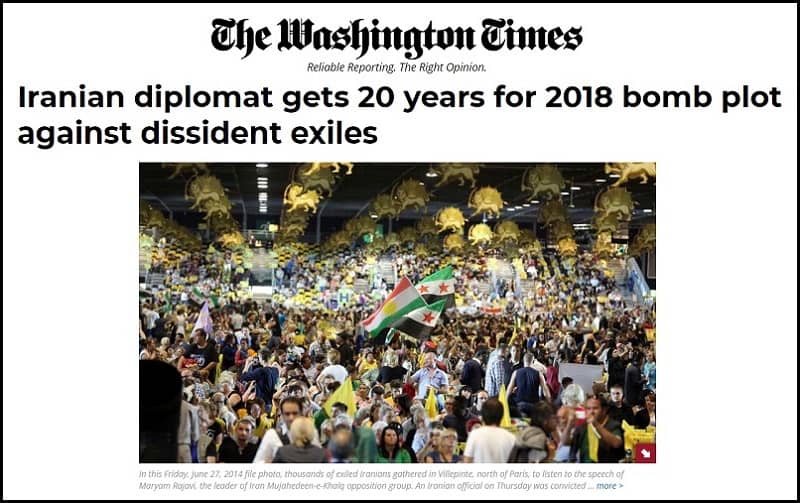 The NCRI claims the thwarted bombing plot was ordered by Tehran with the goal of assassinating NCRI leader Maryam Rajavi at the dissident group’s annual rally. The group, which has long been in the crosshairs of Iran’s theocratic government, hailed Thursday’s rulings. 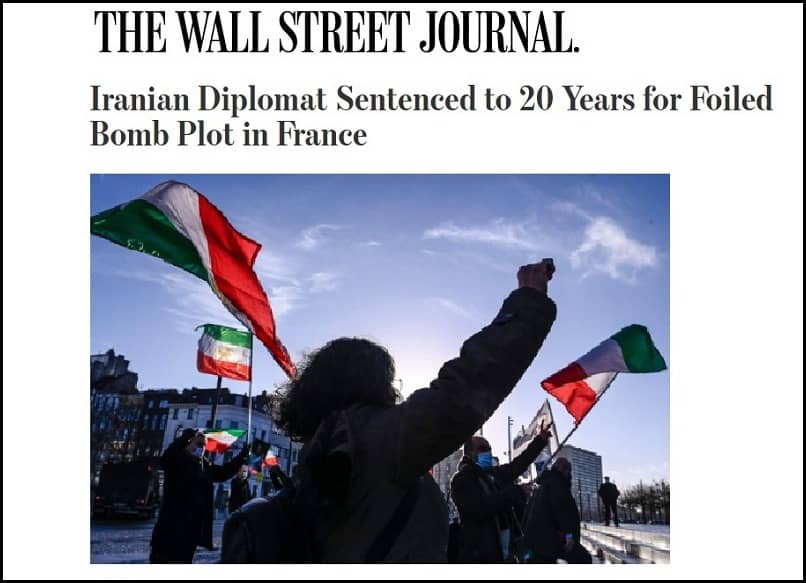 The MEK heralded the verdict as a victory against the Islamic Republic, whose leadership it has worked for nearly 40 years to overthrow.

The group’s leader Maryam Rajavi said the trial had “confirmed the regime’s widespread planning for espionage and terrorism in Europe.” She called on the European Union to recall ambassadors from Tehran and close down Iranian embassies. 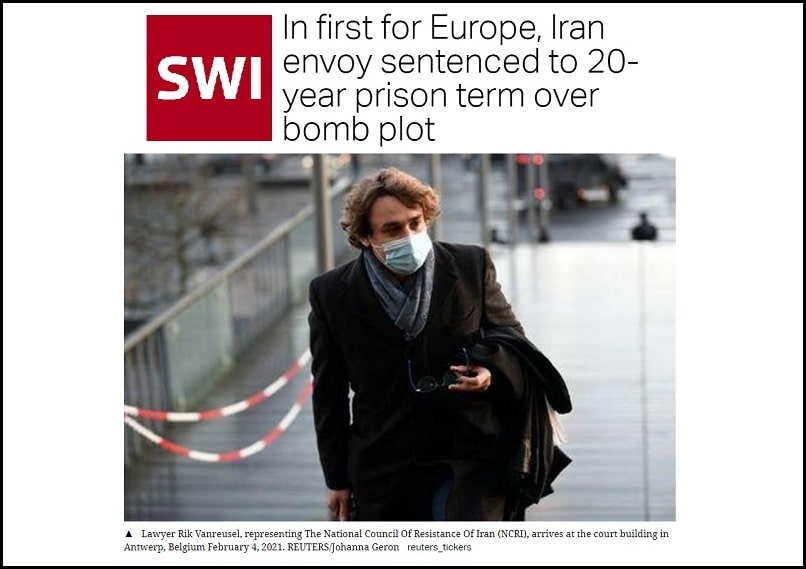 Assadolah Assadi was found guilty of attempted terrorism after a foiled plot to bomb a rally of the National Council of Resistance of Iran (NCRI) near Paris in June 2018, Belgian prosecution lawyers and civil parties to the prosecution said.

The third counsellor at Iran’s embassy in Vienna, he was arrested in Germany before being transferred to Belgium for trial. French officials said he was running an Iranian state intelligence network and was acting on orders from Tehran.

In an interview with Reuters, NCRI chief Maryam Rajavi called the ruling a turning point as it proved Iran was carrying out state-sponsored terrorism. She said the EU could not stand by without reacting even if some in the 27-nation bloc were pushing for more dialogue with Tehran.

Assadollah Assadi was charged by prosecutors with attempted terrorist murder and participation in the activities of a terrorist group, according to a report from The Associated Press. The prosecutors sought a maximum sentence of 20 years in prison for Assadi, according to the wire service.

She told the EU “to take action” and remove ambassadors from Tehran. Tehran denies having any involvement in the attack. 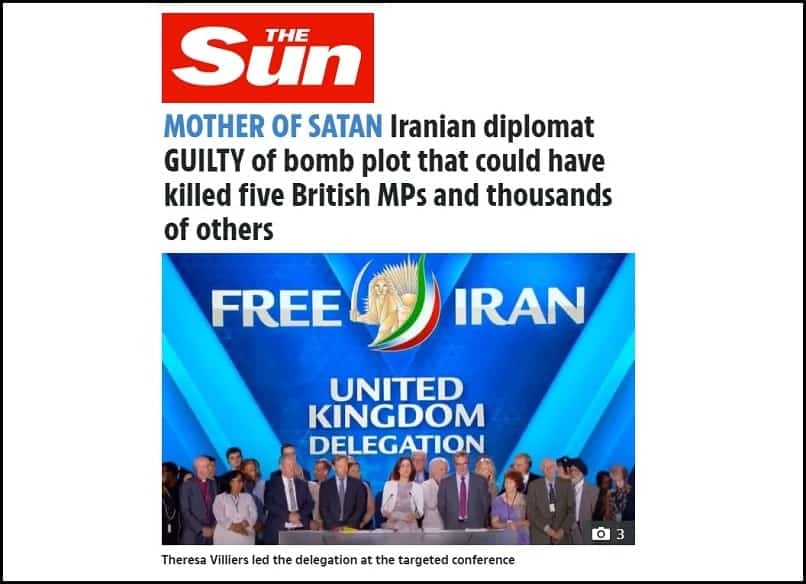 An Iranian diplomat who tried to blow up five British MPs with a “Mother of Satan” bomb has been jailed for 20 years.

Suspected spy Assadollah Assadi, 48 carried a massive bomb in a diplomatic bag on an Austrian Airlines flight in 2018, and planned to blow up an Iranian democracy rally in Paris.

Tory MPs Bob Blackman, Matthew Offord, Sir David Amess and Theresa Villiers, as well as Labour’s Roger Godsiff were all there and could have been killed if the blast had gone off.

Ms Villiers has called for action against the despotic nation following the conviction after leading the delegation at the a rally of the National Council of Resistance of Iran in Paris in 2018.

She told The Sun: “It is shocking that someone representing the Iranian Government has been convicted of this crime.