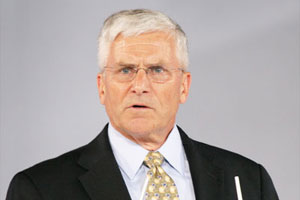 NCRI – The Iranian regime trained and equipped Iraqi militia from 2006 to 2008 and as a result was responsible for the deaths of hundreds of coalition forces and thousands of Iraqis, General George W. Casey told a conference in Arizona.

A partial text of speech by US General George W Casey, The leader of US troops in Iraq from 2004 to 2007 also said in a speech in conference entitled Countering Iran’s Nuclear, Terrorist Threats o April 25, 2014:

When I went into Iraq in the summer of 2004, I knew Iran was going to be a significant player. They share a border with Iraq. They’ve been attacked by Iraq under Saddam Hussein and fought an eight-year war. We believe that they wanted to ensure that there was a friendly Iraqi government put in place there, and they worked very hard to do that. But we also believe that they wanted us to fail in our objective to build a free and democratic Iraq and I will tell you they worked very hard to do that.

Over time I came to see the Iranians employing a three-pronged approach. And I’ve seen them do the same thing in other places.

Secondly, they got a softer side. They burnish their image a bit by trying to win Iraqi public support with economic assistance, by providing economic assistance particularly in the southern part of the country. And they did it directly themselves, much like we do sometimes with the Agency for International Development, but they also did it through Iraqi political parties.

And third and last, they fostered instability in Iraq through the training and equipping of terrorist organizations. And this is the one that had the most impact on me. And I came to see over time a very close connection between the Quds force, which is the extraterritorial arm of the revolutionary guards and the Iraqi militias. And we got our first hint of this really about 30 days after I got there.

There was this significant battle against the Shia militia in the town of Najaf, which is the third holiest site in Islam. And the battle went on for about 30 days. We ultimately prevailed and threw the Shia militia out of Najaf. And as we were going back through our reviews lo and behold we found intercepts from a Quds Force operative who was calling back and reporting on events in Najaf directly to Quds Force headquarters in Iran. That piqued my curiosity and we kept a very close eye on it for the rest of the time I was there.

Where we really saw Iran’s hand though was after the bombing of the al-Askari Mosque in Samarra, a northern city of Iraq, in February of 2006. The Shia militia took to the street, and the more they operated the more we operated against them, and the more weapon caches we found. And those weapons that we found clearly came from Iran. There was a particularly lethal improvised explosive device that needed a manufacturing and tooling capability that didn’t come from Iraq, it could only have come from Iran. There was a state of the art rocket-propelled grenade that would penetrate the armor on our biggest tank. And the boxes we found with ammunition were in Farsi. It was clear.

And by the middle of 2006 there was no doubt that the Iranian regime was training an army, Iraqi militia and terrorist organization. No doubt. In fact we had such good data that before the Iraqi prime minister had his first meeting with the Iranian foreign minister, days after he had assume the position, Ambassador Khalilzad and my intelligence officer and I went in and we briefed the prime minister on what was going on in the country, about the improvised explosive devices, about the weapons, about the training camps and about the Quds Force presence. And when I finished, Prime Minister Maliki turned around and looked at me and said, “They are conducting terrorism in our country.” And I said, “Yes, Prime Minister, they are. And it needs to stop.”

Later in 2006 we began to see a very troubling trend, and it appeared to us that Iraqi militia backed by the Iranians were actively pushing other Iraqis out of parts of Baghdad to expand their control over parts of the city. And we suspected this was going on but we couldn’t confirm it. Well, one December evening right before Christmas our Special Operations forces captured six Quds Force operatives in what amounted to a command center with the Shia militia group the Badr corps. And the Badr corps was the militia of one of the major Shia political parties.

In this command center were weapons receipts that they kept very detailed logs of all the weapons and equipment they got. And there was a map on the wall, a map of Baghdad. And it was color coded. It was color coded by sectarian group. And there were arrows showing the plan, which was to move basically the Sunni and the Christians out of parts of Baghdad so that they could be occupied by the Shia militias. This confirmed everything that we had been thinking and it was immediately clear to me that the Iranian regime was directly and purposefully fomenting sectarian violence to destabilize Iraq. There was no doubt.

So what did I take from all this? Four things about the way Iran operates are crystal clear to me. One, the Iranian regime has and will continue to use terrorism to accomplish their political objectives. That’s a given.

Now secondly, the Iranian role in training and equipping the Iraqi militias as a major factor in sustaining sectarian violence in Iraq from 2006 to 2008 and frankly it continues today.

And as I mentioned earlier, they’re doing the same type of thing in Syria and Lebanon. Third, because of this direct role that they have, they are directly responsible for the deaths of hundreds of coalition forces and thousands of Iraqis. The Iranian regime is responsible.

And so I conclude that they richly deserve the label of state sponsor of terrorism that they have so well earned. I have come to believe that we can count on this regime to continue to foster regional instability, and I’m not going out on a limb here because they’re doing it today in Iraq and Syria and Lebanon. I believe that an Iran with nuclear weapons would present an unacceptable not only for the region but to the entire international community.

And I can think of no other case in which organized democratic resistance against a regime is so warranted and so necessary.