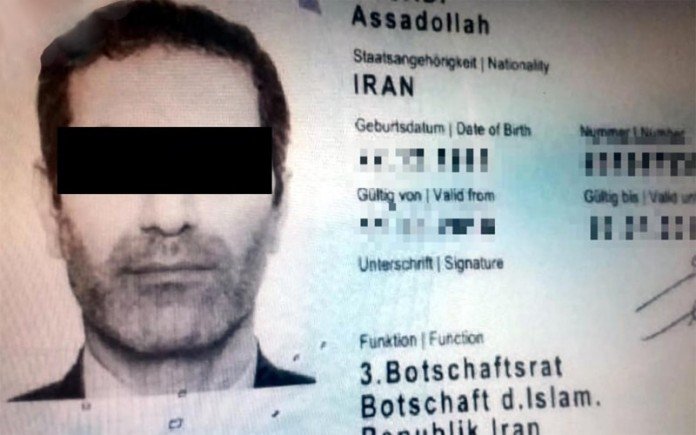 On Wednesday, a court in Belgium heard the appeal filed by lawyers for three Iranian operatives who were convicted early this year of participating in a plot to commit terrorist murder. There is little doubt that their guilty verdict will remain intact, especially considering that the mastermind of that plot seemingly acknowledged his guilt by declining to appeal and by eschewing a genuine legal defense in favor of simply demanding that he be given immunity from prosecution on account of his former status as a diplomat working out of the Iranian embassy in Vienna.

The regime’s diplomat-terrorist, Assadollah Assadi, was sentenced to 20 years in prison. His arrest had exposed the existence of vast Iranian terrorist networks inside Europe, which have yet to be dismantled. Documents obtained from Assadi’s vehicle showed that he had met with operatives across at least 11 countries over a period of about four years, often paying them in cash for services unknown.

The Iranian regime has a long history of terrorist activities spanning the globe including a series of targeted assassinations of opposition activists.  In other cases, existing information is fairly complete but no action has been taken as known perpetrators of terrorist incidents have remained protected inside Iran.

In August, one such individual who is implicated in a Jewish center bombing in Argentina in 1994 killing 85 and injuring 200, Ahmad Vahidi, was appointed as the regime’s Interior Minister.

On one hand, that development is indicative of the regime’s nature with Ebrahim Raisi as president, who is personally responsible for human rights abuses and the systematic killing of thousands of domestic dissidents. On the other hand, both Raisi’s “selection” and Vahidi’s subsequent appointment highlight the sense of impunity that surrounds most of Tehran’s malign activities.

That impunity is reinforced every time the international community declines to respond to new developments in Iran which threaten global stability or the lives of dissidents. The 2018 terror plot certainly had all of these effects, as experts noted that it could have been the worst modern terrorist attack on European soil.

The device Assadi conveyed to his co-conspirators consisted of 500 grams of the high-explosive TATP, which injured a Belgian police officer at the time of its disposal, even though he had been standing outside of the security cordon. Had the bomb been detonated in the middle of the Free Iran rally as planned, it would have certainly killed hundreds and more likely thousands of attendees, possibly including any of the American and European dignitaries who took part in order to show their support for the cause of a free and democratic Iranian nation.

The threat to international security was underscored by the fact that before being discovered in the possession of two operatives at the border between Belgium and France, the TATP traveled from Iran to Austria on a commercial airliner, inside Assadi’s diplomatic pouch. He then drove the explosives from Austrian to Luxembourg for a meeting with the would-be bombers and left them with instructions for how to handle it and where to place it.

The prime target of the plot was evidently Mrs. Maryam Rajavi, President-elect of the National Council of Resistance of Iran. This is as much a testament to the threat posed to the regime by the Iranian Resistance as it is a reminder of the fact that the orders for the attack came from the highest levels of the Iranian regime.

That fact was acknowledged by prosecutors in Assadi’s case, and it should be acknowledged again in the midst of his co-conspirators’ attempts at appeal. The regime activated a sleeper cell and risked an international incident in a desperate attempt to damage the network of opposition activists that played a leading role during the nationwide uprising in Iran at the beginning of 2018. Western power was then presented with an opportunity to compound the effects of the uprising by putting more pressure on the regime over its threats to global stability, but they unfortunately declined.

Of course, as long as those threats persist, the opportunity for Western policymakers will never really go away. But the longer they wait to take action in the form of stronger economic sanctions, arrest warrants, and other penalties for participants in Iranian terrorism, the more emboldened Tehran will be to attempt further attacks along the same lines.

The international community should act to undermine the impunity that motivates such attacks, the least it can do is make serious efforts to dismantle the terrorist networks that make them possible. But even that requires greater political will than most Western policymakers have shown so far. The current appeal in Belgium highlights the extent of the danger such cases represent, and this danger could be prevented by dismantling Tehran’s network of terrorism.