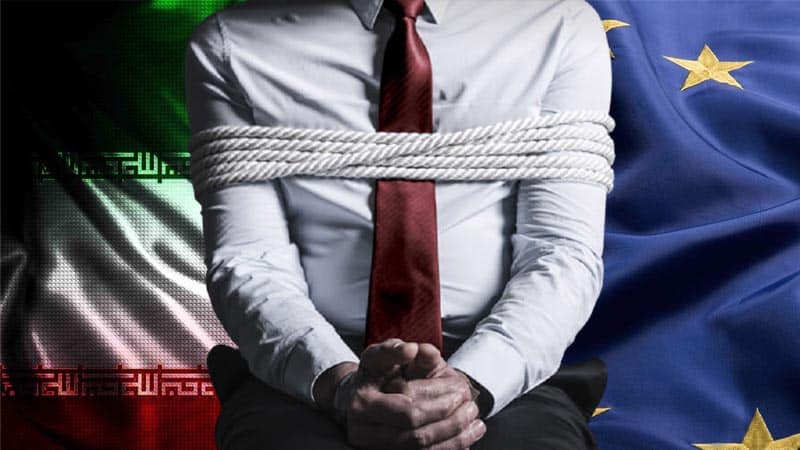 It was recently revealed that two Europeans – a German citizen and an Iranian-French dual national – were arrested in Iran sometime before the February 4 conviction on terrorism charges for a high-ranking Iranian diplomat. The arrests were allegedly part of a broader effort to compel Belgian authorities to vacate the charges against Assadollah Assadi, the former third counsellor at the Iranian embassy in Vienna who was identified in 2018 as the mastermind of a plot to bomb the annual gathering of the National Council of Resistance of Iran (NCRI).

Assadi was arrested in Germany on July 1, 2018, a day after two co-conspirators were stopped on the way from Belgium to France, where they planned to infiltrate the Free Iran rally while carrying 500 grams of the high-explosive TATP. It was later revealed that Assadi himself had smuggled the explosives into Europe on a commercial flight, while traveling on a diplomatic passport. He had then handed it off to the would-be bombers, instructing them to place it as close as possible to the keynote speaker and Iranian Resistance leader Maryam Rajavi.

Had the plot not been foiled, it would have mostly likely resulted in several hundred deaths, including those of political dignitaries who had traveled to the host venue just outside of Paris. Attendees included lawmakers, intelligence and security professionals, and scholars of foreign policy representing a range of political affiliations in both the US and Europe.

Many of those speakers have since expressed the view that Assadi’s terror plot further justified their critical view. Some of them conveyed that view by signing their names to statements commenting upon the trial both before and after Assadi’s conviction. Two such statements were prepared by a Brussels-based NGO called the International Committee in Search of Justice (ISJ), which is chaired by the former vice president of the European Parliament, Alejo Vidal-Quadras.

The more recent of these was primarily addressed to European Council President Charles Michel and it accused the European External Action Service and the EU’s head of foreign policy Josep Borrell of maintaining policies that amount to “catastrophic capitulation” even in the wake of “the Iranian regime’s attempt to bomb and kill people on European soil.” The statement urged more assertive Western policies, including downgrades in diplomatic relations, as a means of countering the threat of further attacks on Western territory and personnel.

Ironically, Borrell announced that he would deliver a keynote address at the Europe-Iran Business Forum, alongside Iranian Foreign Minister Mohammad Javad Zarif. The ISJ statement directly identified Zarif as one of the leading Iranian officials involved in the 2018 terror plot, and so it also called for Western powers to take action against him and to consider closing the embassies from which terrorist entities like Assadi manage their networks.

1)
After #AssadollahAssadi’s conviction, and while @UN condemned Iran regime for the 67th time for human rights abuses, what message will @JosepBorrellF & @eu_eeas's “maximum diplomacy” strategy send to #Iran?

Assadi’s trial revealed not only the details of his role in the plot to bomb the Free Iran rally but also the fact that he had recently been in direct contact with assets spanning at least 11 European countries, many of whom received cash payments from him for unknown services. This is a sure sign of a persistent threat that is being largely ignored in the wake of the February 4 conviction.

Now, with the revelation of Iran having arrested two more Western nationals prior to that date, it is clear that the Assadi case reflects additional threats beyond the threat of large-scale terrorist attacks. The recent ISJ statement emphasizes the idea that the EU will be giving high-ranking officials a free pass for their unsuccessful plot if European policymakers decline to pursue broader accountability. Future statements are sure to add that the EU also risks giving Iran a free pass for some of its latest instances of hostage-taking – a practice that dates back to the immediate aftermath of the 1979 revolution.

The EU certainly should have been spurred to more assertive action immediately after details were released about the regime’s efforts to attack the Iranian Resistance on European soil. Statements from the likes of ISJ should have reinforced that impulse while also providing European leadership with concrete examples of the sorts of policies they could implement to prevent such things from happening again. But having previously failed to heed those recommendations, the EU still has an opportunity to recognize news of the recent arrests as another opportunity to make an assertive shift in its Iran policy.

The NCRI has long insisted that the only language Tehran is likely to respond to is the language of strength. That conclusion has been steadily reinforced in recent months and years, as the EU has insisted upon a strategy of “maximum diplomacy,” only to meet with one example after another of Iran exploiting that goodwill to assert its own impunity in matters related to terrorism, hostage-taking, human rights violations, and so on.

The 2018 terror plot is perhaps the worst recent example of this phenomenon, while the newly-reported arrests are only the latest. And unless the international community takes coordinated steps to compel Iran into halting such acts, they will certainly not be the last.