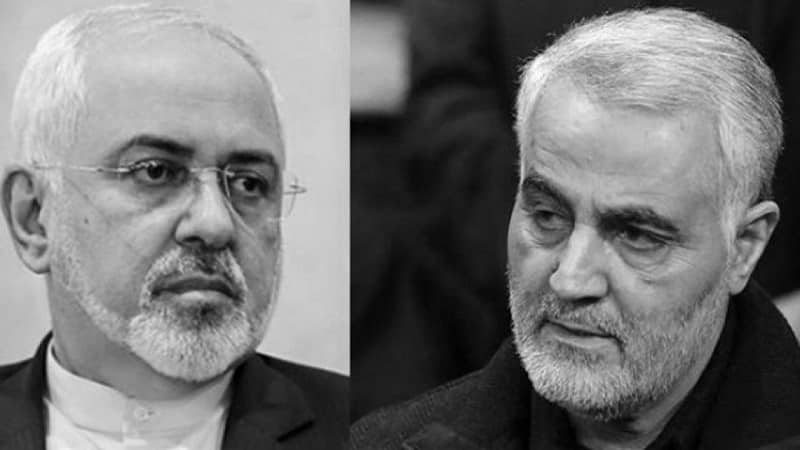 An audio interview with Mohammad Javad Zarif,  the Iranian regime’s foreign minister had been leaked to the state media earlier this week. This audiotape has increased the regime’s infightings.

In his interview, Mohmmad Javad Zarif confirmed the mullahs’ foreign policy is only meant to justify the regime’s terrorism. Zarif tried to blame Qassem Soleimani, the regime’s terror-mastermind, who was killed in a US drone strike in January 2020.

Soleimani was the commander of the Revolutionary Guards (IRGC) Quds Force. Soleimani had previously overshadowed Javad Zarif in matters of foreign policy, as when Zarif was excluded from talks with the Iran-backed Syrian dictator, Bashar al-Assad.

Zarif’s interview confirmed that the regime’s export of terrorism has been the primary source of foreign policy decisions of the ruling theocracy. Zarif tries to shift the blame on Soleimani, by saying that the military focus had gotten in the way of the regime’s diplomacy.  But many of his earlier statements suggested otherwise, including a 2019 speech during a visit to the IRGC’s headquarters, in which he proclaimed that he and Soleimani had strategic discussions on a weekly basis and had no differences with each other.

Just days after the interview leaked, this account of diplomatic-military cooperation was corroborated and expanded by the regime’s President Hassan Rouhani. In a cabinet meeting on Wednesday, he praised the clerical regime’s “exact system and framework” for collaborative decision-making in matters of foreign policy and military or paramilitary operations. He referred in particular to the Supreme National Security Council; an entity comprised of the regime’s top officials. “The SNSC was set up to allow the heads of the three branches to be present and the military and the government branches to come together,” he said.

Of course, any decision made by the SNSC is also subject to approval by the regime’s Supreme Leader Ali Khamenei.

Zarif leaked remarks also debunk the claims of moderation in the regime.  The notion of substantial differences between the so-called “hardliners” and “reformists” has long been rejected by the Iranian Resistance in the past 40 years.

Zarif’s efforts at deflecting blame can be understood as part of a larger strategy that has been invoked many times by his “reformist” ilk. Although that faction was in charge, its standard-bearers tried to whitewash themselves from terrorism.

But this claim stands in contrast to Rouhani’s praise for the SNSC and its role in a system and framework that give a voice to every major entity that makes up the Iranian regime. The best way to resolve this apparent contradiction is by accepting that in reality, all regime officials and institutions ultimately speak with one voice – essentially the voice of Khamenei to whom they all swear allegiance as a precondition for being allowed to so much as run for office.

By the same token, Zarif’s recent “complaints” can be understood as part of a longstanding effort to support and facilitate the regime’s most provocative activities while also avoiding personal responsibility for them. This is perhaps the most substantial difference between the “hardliners” and the “reformists,”.

Neither is it a reason to actually absolve members of the Rouhani administration for anything that happened – or nearly happened – over the past eight years. Through entities like the SNSC, those officials had full awareness and ample input regarding everything from crackdowns on domestic dissent to violent intervention in defense of the Assad regime, to multiple efforts at perpetrating terrorism on Western soil.

In 2018 alone, two major incidents of this kind were thwarted – an attempted truck bombing at the Iranian opposition in Albania, and a plot to infiltrate and bomb the Iranian Resistance’s gathering near Paris, which was also attended by hundreds of political dignitaries from throughout the world. In both of those cases, the primary target of the terror plots was Mrs. Maryam Rajavi, the President-elect of the National Council of Resistance of Iran (NCRI).

That year’s upsurge in terrorist activity was the regime’s desperate reaction following the 2018 nationwide anti-regime uprising, which Khamenei publicly attributed to the growing influence of the Iranian Resistance. The protests encompassed more than 100 cities and towns and helped to popularize slogans that condemned both factions of mainstream Iranian politics and endorsed the goal of regime change.

In the wake of those terror plots being thwarted, the NCRI made a concerted effort to emphasize the involvement of the SNSC, and thus of both Rouhani and Khamenei, in its planning. The Belgian trial of the four known operatives in the Paris terror plot confirmed that they had been acting upon orders from high within the regime’s leadership and that the operation had been run through the Iranian embassy in Vienna, where the plot’s mastermind was serving as the third counselor.

It is simply unthinkable that Zarif could have been unaware of such activity among his own diplomats. It is no surprise, however, that he would make every effort to avoid taking responsibility for it. But now, with Zarif and Rouhani’s explicit remarks, it is crystal clear that not only were they aware of all those malign and terrorist activities, but they also had the mandate of whitewashing them.