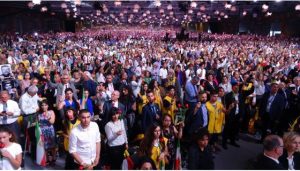 Since its inception in 1981, the National Council of Resistance of Iran (NCRI) and its members have been the target of several deadly attacks orchestrated by the Iranian regime, according to the Parliamentary Human Rights Group of the United Kingdom.
An assassination attempt against Mr. Hossein Abedini, a member of the NCRI, took place in Turkey on March 14, 1990.
Besides, there was the murder of Mr. Kazem Rajavi, brother of Massoud Rajavi and the representative of the NCRI in Geneva, on April 24, 1990. Several Iranian agents using governmental passports ‘on mission’ carried out the attack.
On March 16, 1993, Mr. Mohammad Hossein Naghdi, the NCRI representative in Italy, was shot. In 2014, the United States refused an Iranian diplomat as an ambassador for the UN headquarters in New York because of his involvement in the Naghdi assassination.
A plan to eliminate Mrs. Maryam Rajavi failed when rockets and a giant mortar were seized on an Iranian cargo ship near Antwerp.
Before this, there was already a plot to murder Mrs. Rajavi during a large Dortmund meeting in June 1995. Hossein Mousavian, the Iranian ambassador to Germany, had initiated the attack.
There are indications that the Villepinte failed attack also targeted Mrs. Rajavi.

In February 1996, Ms. Zahra Rajabi, a member of the NCRI, was murdered in Turkey. One of the perpetrators was an agent of the Iranian regime and was sentenced to years in prison. The Istanbul Criminal Court sentenced Reza Berzeger to life imprisonment, including one year of solitary confinement for the murders of Ms. Rajabi and Mr. Ali Moradi.

On March 21, 2018, an attack against the PMOI was foiled in Albania. Following the event, Albania deported two secret agents from the Iranian Ministry of Intelligence (MOIS).
Since 2016, Albania has been home to some 3,000 MEK members in the Ashraf 3 camp. Subsequently, it turned out that the workforce of the initially tiny Iranian embassy in Tirana had increased significantly. Several embassy members were since expelled from the country for violating their diplomatic status (read: actively engaged in espionage activities and initiated preparatory acts for terrorist activities ).
In August 2018, the United States prosecuted two secret agents of the Iranian regime for espionage against two members of the NCRI. These agents were expelled from the country.
Since 2004, the NCRI has organized a large annual gathering for all its members and sympathizers. This event evolved from a meeting of a few thousand people to an attendance in 2018 estimated at tens of thousands of people.

The over eight-hour event includes speeches by dozens of dignitaries, performances, and a memorial service for those killed by the regime. The event hall is packed to the brim, and the participants are very close together. The bombing would therefore have caused enormous damage. The effect of tens of thousands of people who, startled by the explosion, would search for an exit would also have caused undeniable physical damage.

With the rise of popularity among Iranians abroad and the widespread support of politicians in Western countries, especially the support over the years of more than 4,000 parliamentarians from about 40 countries, including most parliaments of European countries (France, England, Italy, Switzerland, Belgium, …) and the US Congress, the Iranian regime tried to stop the organization of the event. Every year at the same time as the meeting, all the regime’s organs focused on preventing the convention from happening.
The Belgian police investigations have shown that the failed operation against the June 30, 2018 gathering had been planned for at least a year. A comprehensive collection of security information combined with a field reconnaissance mission undertaken by Assadolah Assadi and his chain of command leaves no doubt that the operation was a thoroughly planned one.