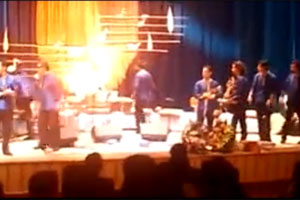 The Iranian regime authorities has cancelled a major performance by the Tehran Symphony Orchestra at the last minute because it was due to feature female musicians.

The Tehran Symphony Orchestra conductor was informed of cancellation 15 minutes before the orchestra was scheduled to play at a major sporting event that they could not.

“It’s absolutely impossible for women to play musical instruments on stage,” the conductor quoted organisers of the ceremony as saying.

The Iranian regime has banned from singing solo in public since its inception in 1979, and female Iranian musicians have repeatedly been stopped from performing.

Many performers in Iran’s orchestra have migrated abroad and now are playing for foreign orchestras.