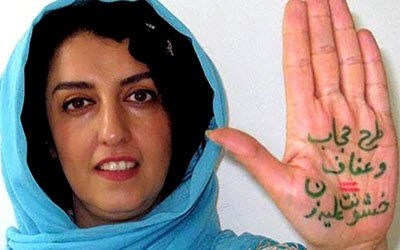 NCRI – Narges Mohammadi: I believe in the way I pursue and I have no regret about the jobs that I did

The deputy of the Human Rights’ Advocates, Narges Mohammadi sent a memo from Evin Prison and stressed that she will tolerate the ordeal of prison but she never believes that serving a day in this prison is legal, ethical and humane for her.

The branch 36 of the Appeals Court of Tehran Province confirmed the sentence of Narges Mohammadi to 16 years of imprisonment.

Following the confirmation of her sentence by the Appeals Court, the political prisoner, Narges Mohammadi defended her measures and actions and wrote in a letter:” I don’t regret about my beliefs, thoughts, and deeds and I insist on the realization of human rights.”

This political prisoner, in her letter, asks:” are the social harms, such as addiction, poverty, unemployment and suicide, the product of the human rights’ activists or are they the result of government’s performance? The government has no boundary in observing the people’s privacy. Not only are the individual, civil and political rights of the citizens retained but the government also encroach them and each protest is responded with imprisonment and detainment.”

The political prisoner, Narges Mohammadi also added in her letter:”Apparently, the Judiciary of Iran has switched the place of the defendant and the plaintiff. The perpetrators of the economic, cultural and social problems are exempted from any interrogations or further inquiries whereas the real victims and critics are sentenced to imprisonment and punishment.”