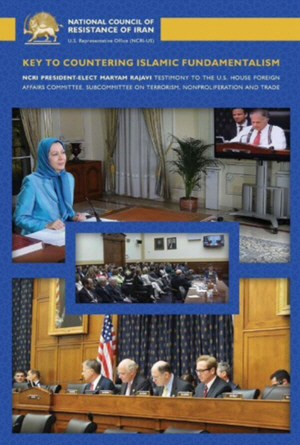 Testimony before U.S. House Foreign Affairs Committee’s subcommittee on Terrorism, non-Proliferation, and Trade discussing ISIS and Islamic fundamentalism. The book contains Maryam Rajavi’s full testimony as well as the question and answer by representatives. During the hearing,

Maryam Rajavi who is the president-elect of Iran’s parliament-in-exile, the National Council of Resistance of Iran which seeks a secular, democratic, non-nuclear republic Iran, outlined specific steps that needs to be taken by the United States to defeat ISIS and most importantly to eliminate the epicenter of Islamic extremism and terrorism in the region. She offered a solution and emphasized on the role that the Iranian opposition has to play in bringing about change in Iran and have a positive impact in the region. She spoke via satellite from her headquarters in Auvers-sur-Oise near Paris, France. The testimony took place on April 29, 2015.