Some U.S. senators are insisting on renewing expiring sanctions against the regime in Iran, even as lawmakers decide whether to endorse the Obama administration’s landmark nuclear deal which was agree to last week.

Though the Obama administration is calling the move “premature,” Sen. Bob Menendez (D-N.J.) on Thursday said renewing existing sanctions set to expire next year will act as a bulwark against Tehran’s ability to cheat on the deal.

“It seems to me that if you want a deterrent, Iran has to know consequences,” he told three members of Obama’s Cabinet during a Senate Foreign Relations Committee hearing Thursday. 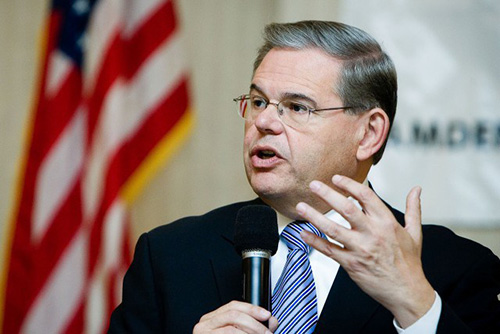 “I’m going to move to reauthorize them because I believe it should be part of the deterrence.”

The Iran Sanctions Act, which was first enacted in 1996, aims to block the regime in Iran from building nuclear weapons as well as from financing extremist groups such as Hezbollah. Though many of those sanctions would be lifted under the terms of the international deal with the regime, Sen. Menendez said the law should be on the books so there is something to “snap back” to if Tehran breaks the deal.

“I don’t understand how we ultimately have a credible belief that snapback means something, if in fact you don’t have the ability to have those sanctions in place,” said Sen. Menendez, who has shown increasing skepticism about the multilateral accord.