EDITORIAL: Iran, the November 2019 Uprising, One Year After 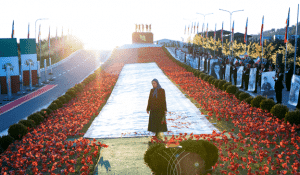 The announcement on the tripling of gasoline prices on Friday, evening, November 15, 2019, initiated a nationwide uprising that continued for several days. The lightening spread of the protests, and with the young generation, especially the deprived, previously believed to be the regime’s power base, leading the way, shook the clerical regime’s foundation.

The regime reacted with the utmost brutality to preserve its rule by turning the protests into a bloodbath. The IRGC, the paramilitary Bassij, the State Security Force (SSF) and plainclothes officers used live fire to target the unarmed protests with orders to shoot and kill. In some areas, such as Mahshahr, they also used armored vehicles, helicopters, and high caliber machine guns. At least 1,500 people were killed, 4,000 wounded, and 12,000 arrested during the crackdown.

Despite such barbarity, and while the gasoline price hike acted as the spark, the uprising engulfed nearly 200 cities, with the protesters calling for the overthrow of the regime in its entirety.

What made the uprising different from previous upheavals was its organized nature, as the resistance units affiliated with the main Iranian opposition the Mujahedin-e Khalq (MEK) were actively involved. The regime’s Supreme Leader Ali Khamenei admitted this fact a few weeks later. Another distinctive feature of the uprising was the widespread and leading role played by women, who showed extraordinary courage and competence in guiding the protests.

Now, the fundamental and very important question is whether the November 2019 uprising belongs to the past, or is it a continuous movement?

“This uprising is continuing, expanding, and deepening. It is linked to and supported by organized resistance. The regime has no way out and lacks any winning cards.” The Iranian Resistance’s Leader Massoud Rajavi said.

The November 2019 uprising and the January 2019 unrest proved the correctness of those remarks. There are many other signs and reasons as well. Most importantly, the regime’s reactions clearly show the fact that the spirit of the November 2019 uprising is present in Iranian society as “embers beneath the ashes” and will explode sooner or later. The following underlying reasons explain why the spirit of resistance and rebellion is alive and well in Iran.

In other words, both the underlying causes of the uprising continue to exist, and also the youth and the MEK’s resistance units, having the experience of previous uprisings, are preparing for the next one.

On the other hand, the regime is far more vulnerable than at any time in its 41-year history. It is encircled by irremediable crises internally, regionally, and internationally. The sole reason for the regime’s survival is its brutal crackdown, executions, and public hangings of young people.

This situation, of course, is not hidden from the eyes of the people, who see the weakness of the regime and continuously take an aggressive posture against the regime. This can be seen in the events commemorating the martyrs of the uprising by the families, the widespread dissemination of images and names of the martyrs in different cities, and in statements of support by political prisoners among others.

On the other hand, the regime, despite its hostile and vicious actions, such as the criminal execution of two heroes of the uprising, Navid Afkari, and Mostafa Salehi, and the arrest and continuation of torture of those detained during the uprising, displays its fear and weakness.

In short, as the President-elect of the National Council of Resistance of Iran (NCRI) said: “The November 2019 uprising was not a fleeting meteoroid. Rather, it was a manifestation of the burning determination that will continue to carry on until the mullahs’ religious dictatorship is overthrown.”