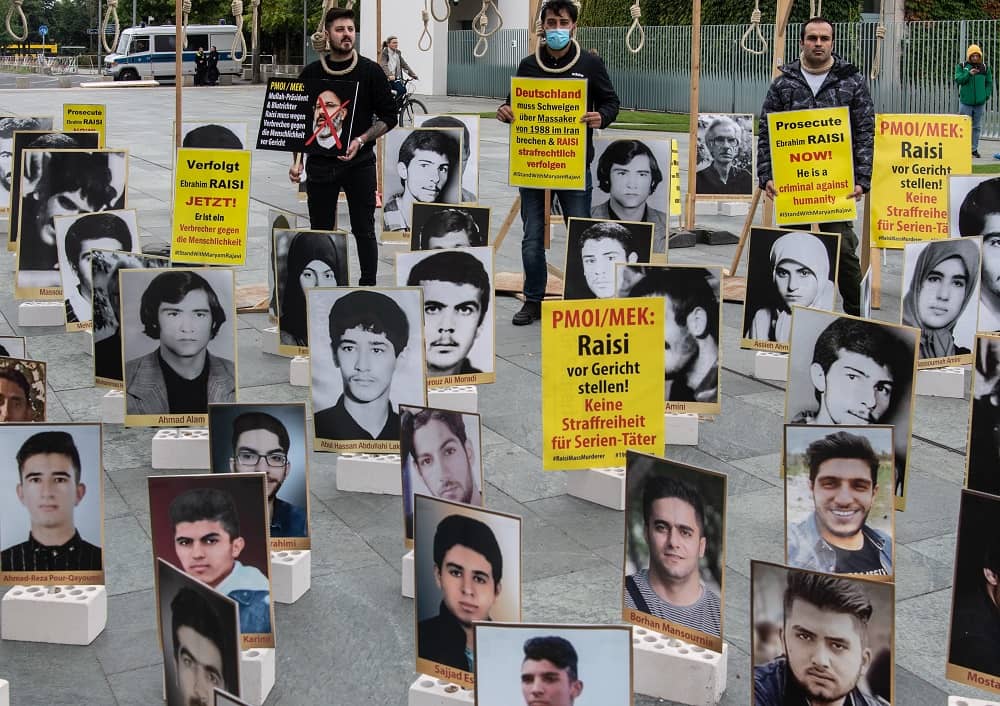 Javaid Rehman, the special rapporteur for the situation of human rights in Iran, presented his latest report to the United Nations General Assembly on Monday. It highlighted the ongoing and worsening pattern of abuses at every level, but it also emphasized the role that the Iranian regime’s “impunity” has played in that pattern. “The situation is aggravated by the fact that individuals who face allegations of being involved in the commission of serious human rights violations remain in powerful positions, including at the highest level of public office,” Rehman noted.

He was referring in particular to the “selection” of Ebrahim Raisi as the regime’s new president. Raisi’s candidacy was the subject of widespread domestic protests that labeled him as the “henchman of 1988,” in recognition of his leading role in a massacre of political prisoners that took place during the summer of that year. The massacre was instigated by a fatwa from then-Supreme Leader Ruhollah Khomeini, which branded members of Iran’s leading opposition group, the People’s Mojahedin Organization of Iran, as enemies of God and called for their systematic execution.

In June 1988, Raisi was a member of Tehran’s “death commission,” was tasked with interrogating inmates over their political views and affiliations, then passing death sentences for those who either refused to demonstrate fealty to the clerical regime. The death sentences were frequently issued after “trials” that lasted only a minute or two, and many survivors of the massacre have reported that Raisi appeared especially committed to casting a broad net in the execution of Khomeini’s order.

Over the last few years, the regime has tried to destroy any evidence of the 1988 massacre, and this fact was confirmed by Mr. Rehman. “My mandate notes with concern the high number of acts of reprisals undertaken by security and the intelligence agencies against families of victims, human rights defenders, lawyers, journalists and others calling for accountability.”

Ebrahim Raisi, Chief Regime Henchman Vies for Iranian PresidencyMay 12, 2021
More than a year earlier, Rehman was joined by six other UN human rights experts in signing an open letter that called upon regime authorities to end this pattern of harassment and to adopt a policy of transparency regarding the 1988 massacre. The letter was published for an international audience last December after Tehran failed to respond for three months. Thus it served as a much-needed call to action for the UN and its leading member states – a call to action that would become all the more urgent several months later when Raisi was confirmed as the regime’s next president.

Rehman’s latest comments are reminiscent of Amnesty International’s immediate response to Iran’s sham presidential election. The human rights organization’s Secretary-General Agnès Calamard said in a statement, “That Ebrahim Raisi has risen to the presidency instead of being investigated for the crimes against humanity of murder, enforced disappearance and torture is a grim reminder that impunity reigns supreme in Iran.” The suggestion of international culpability for that situation was made all the more clear in the UN experts’ letter, which acknowledged that all relevant UN bodies had overlooked the 1988 massacre while it was ongoing.

“In December 1988, the UN General Assembly… expressed ‘grave concern’ about ‘a renewed pattern of executions in the period July-September 1988’ targeting prisoners ‘because of their political convictions,” the letter said. It then went on to chastise the General Assembly, the Security Council, and the Human Rights Commission for a lack of follow-up. “The failure of these bodies to act,” the experts wrote, “had a devastating impact on the survivors and families as well as on the general situation of human rights in Iran and emboldened Iran to continue to conceal the fate of the victims and to maintain a strategy of deflection and denial that continue to date.”

This “devastating impact” was particularly evident when Tehran asserted its impunity in November 2019, and for several months thereafter, by carrying out a systematic crackdown on dissent in the wake of a nationwide uprising. Authorities opened fire on crowds in several cities, killing over 1,500 people. At least 12,000 more were arrested around the same time, and many of them were then subjected to various forms of torture over a period of several months. Tellingly, the judiciary at that time was headed by Ebrahim Raisi.

Now Raisi has become the regime’s president. The lack of an international response allowed the regime to conclude that neither Raisi’s legitimacy nor his conduct would be seriously challenged on the world stage.This conclusion was further validated at the time of Raisi’s inauguration in August, which was attended by the deputy political director of the European External Action Service. The Western presence at the inauguration was a slap in the face to international human rights principles, as well as to their own cause. The following month, the Iranian opposition President-elect, Mrs. Maryam Rajavi intimated that the embrace of Raisi’s administration represented a failure of a “litmus test” for the international community.

“I call on the UN Security Council to take action to hold the leaders of the mullahs’ regime, especially Ali Khamenei, Raisi, and [Judiciary Chief Mohseni] Ejeii, accountable for committing genocide and crimes against humanity,” Mrs. Rajavi said in a virtual conference organized by the National Council of Resistance of Iran. She then added that it “would be an unforgivable insult to the peoples of all countries” if Raisi were permitted to take part in international gatherings or travel freely on state visits.

Since then, the Iranian Resistance has held a number of events and issued a number of statements calling for the UN to establish a formal commission of inquiry into the 1988 massacre and for leading perpetrators like Raisi to be prosecuted in accordance with its findings. That prosecution could be carried out at the International Criminal Court in the wake of a UN Security Council resolution, or else could be pursued unilaterally by any country that invokes the principle of universal jurisdiction.

In 2019, Sweden invoked that principle to justify the arrest of Hamid Noury, a prison official in 1988 and a participant in the 1988 massacre. Noury is currently standing trial in Stockholm and he stands to be the first official to face legal consequences for the 33-year-old crime against humanity. Further such prosecutions are vital to challenge the impunity that UN special rapporteurs, Amnesty International, and others recognize as guiding Tehran’s domestic actions to this day.