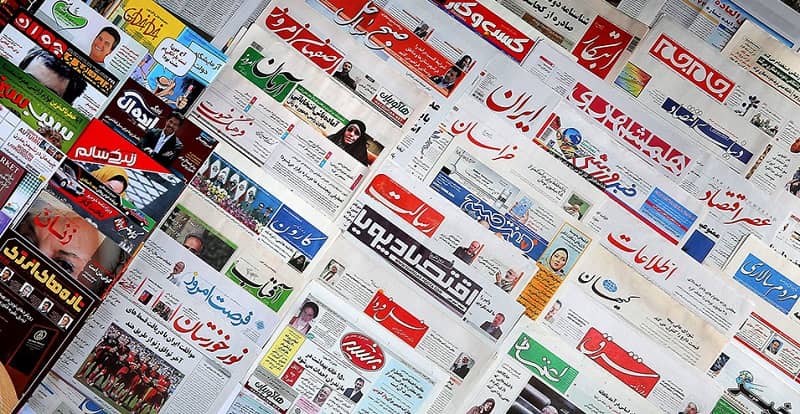 In recent days, Iran’s state-run newspapers once again covered some aspects of the country’s crises, people’s dire conditions, society’s restiveness, and the regime’s fear of another uprising.

Iran’s Covid-19 crisis continues to worsen amid the regime’s inhumane coronavirus policy and inaction. While the Covid-19 death toll is increasing daily in Iran, and many health experts warn about the approaching sixth wave of Covid-19, the regime has decided to reopen schools.

Responding to Mardom Salary daily’s question that whether reopening schools would increase the number of patients, Alireza Naji, Head of Virology Research Center at the Beheshti University said: “This would happen, since most adults are being vaccinated [at low paste] the reopening of schools and universities could lead to the spread of the disease to youth under 18. This is a warning.”

“We are experiencing the fifth and sixth Covid-19 wave back-to-back, as we experienced the fourth and fifth peaks. Our number of positive cases has not decreased for a while and is very high,” Naji told Mardom Salary daily on October 23.

Over 464 700 people have lost their lives due to the Covid-19 pandemic in Iran, according to reports compiled by the People’s Mojahedin Organization of Iran (PMOI/MEK) as of Tuesday afternoon local time.

More than 464,700 people have died of the novel #coronavirus in 547 cities checkered across all of Iran's 31 provinces, according to the Iranian opposition PMOI/MEK.

“The number of red cities has doubled this week compared to last week. Meanwhile, the employees’ working hours have also been reduced. Experts warn that lifting the restrictions would have been more efficient if it had been done step by step. Still, the reopening of schools and universities and the cancellation of virtual classes could sound the alarm for the sixth wave,” wrote the state-run Setareh Sobh Daily on October 25, adding that Iran’s “coronavirus vaccination is far below the desired level of about 80%.”

Iran’s economy is plagued with the regime’s institutionalized corruption. As these crises aggravate, the regime’s factions blame one another for the current economic situation.

Since assuming office in August 2021, the regime’s new president Ebrahim Raisi has continued the path of his predecessor Rouhani in giving hollow economic promises. His hollow promises and futile provincial visits. Raisi also tries to blame Rouhani for all problems.

“Seventy-eight days after the inauguration of the president, the value of the country’s currency continues to fall sharply, and foreign exchange reserves are declining. No investment has been made in the energy sector,” wrote the state-run Aftab-e Yazd on October 23, adding, “The role of government policies in the field of economy and international relations in creating inflation has widened, and government officials continue to accuse Rouhani of the country’s problems. You cannot blame everything on Rouhani.”

“Nearly three months after the beginning of the government, there has been no written and practical strategy by the government to change the people’s living conditions,” wrote the state-run Arman daily on October 23. While referring to the “obvious contractions in actions and words of Raisi’s economic team,” Arman daily acknowledges that “The country seems to be facing a shortage of budget, currency and healthy incomes. Meanwhile, during his trips, Raisi made promises. How do you want to cover the expenses of fulfilling these promises?”

Iran News in Brief – October 4, 2021#Iran: New footage has emerged that shows how Ebrahim Raisi, the Iranian regime president’s convoy has been met with angry locals, during his trip to Yasuj.#ProsecuteRaisiNOW https://t.co/QjKMeXUFx6https://t.co/8dXx4RmgGo

On October 23, Aftab-e Yazd acknowledged that Iran’s “inflation rate has reached its highest point recently,” adding, “This is an important reason why economists have no hope for the future of the country’s economy, and with the current trend of policies concerning the economy and foreign policy, we will definitely face triple-digit inflation by next year.”

Raisi’s administration has boasted about circumventing sanctions or selling oil to China, claiming it has found a way to resolve Iran’s economic problems.

But, according to Aftab-e Yazd, since China would only lend credibility to the regime, not any money, “Selling oil to China and increasing the country’s dependence on Chinese credit could make things much worse.” Calling oil sales to China a black hole, Aftab-e Yazd wrote that if the regime’s current “policies continue, it will no longer be possible to get out of this black hole.”

Meanwhile, Setareh Sobh daily acknowledged on October 25 that “40 million people in the country need immediate help.” And according to Sharq daily on October 25, “The real unemployed population can be estimated to be about 20 million.”

Sharq then warns regime officials that once people see that, compared to other countries, they “could not have a dignified and prosperous life, hardly find a job, cannot provide adequate food and treatment for their families due to the difference between the high inflation rate and low incomes, which has pushed more people under the poverty line,” the regime should expect major “protests like in January 2018 and November 2019, or the low participation in the [sham] presidential and parliamentary elections.”

Other state-run newspapers in recent days repeated the same warnings about eventual uprising.

Discussing fuel prices, Arman daily acknowledged that “All or a significant part of the price increase is due to mismanagement. Since people see that after three decades, they have to pay the costs for the officials’ recklessness, they can no longer tolerate the situation.”

“When the conditions are ripe for chaos, any minor incident could cause the greatest crises ever,” Arman daily warned on October 25, adding, “The worst and most costly methods of handling disorders and crises are done after these incidents happen.”

“In a society where inflation is rampant and is pressuring people, every incident, however small, may ignite a fire that cannot be extinguished,” Arman daily adds.

While mocking the regime’s rising oppressive measures and comparing them to “firefighting facilities,” Arman wrote: “Some [officials] may be aware of the issue, but they see the solution in the expansion of forces and firefighting facilities. This dangerous approach shows they seem not to be afraid of an explosive society. These officials certainly do not think of addressing these dissatisfactions.”

Arman daily then warned: “Accidents dazzle our eyes like dangerous sparks and frighten us.”