Iran: The Courage of Iranian Martyrs Should Spur Western Action To Provide Them Justice 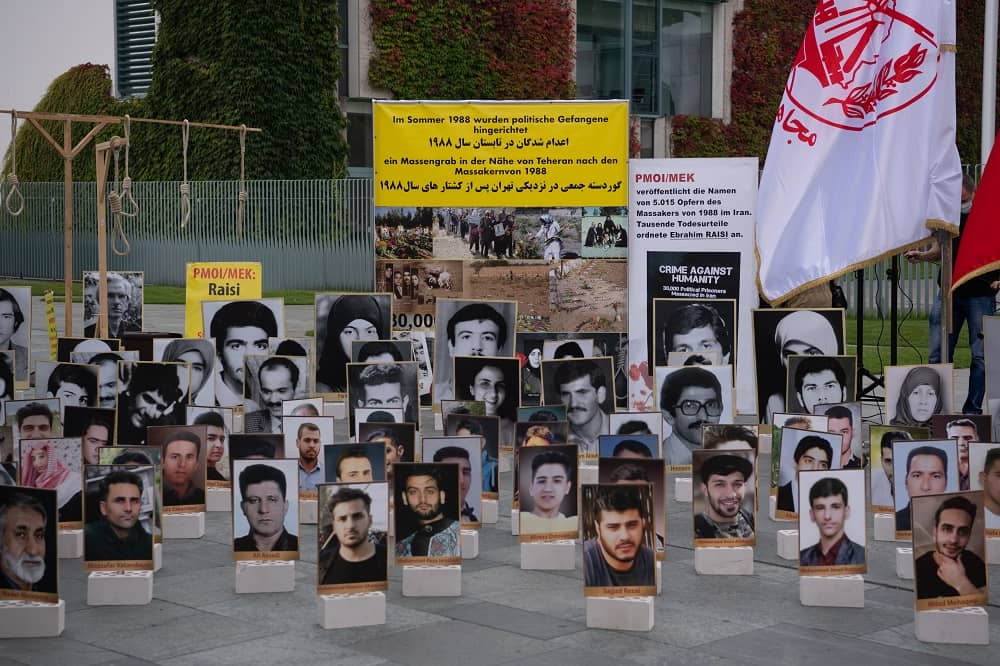 For 13 years, beginning in 1982, I was a political prisoner in Iran. During that time, I witnessed countless horrors and was personally subjected to brutal torture and mistreatment. In my initial detention at Gohardasht Prison, I was accompanied by Mohsen, a fellow supporter of the People’s Mojahedin Organization of Iran (PMOI/MEK). Not long after we became cohabitants of the facility’s political ward, Mohsen succumbed to the worsening torture. His death came as little surprise to me, but at the time, I did not anticipate the scale of the killing I would eventually bear witness to.
Several other political prisoners were killed in the same fashion as Mohsen during the ensuing years. But the first six entire years of my imprisonment offered no comparison to what I would witness during just a few months in 1988. That was the year in which the regime’s Supreme Leader Ruhollah Khomeini issued a fatwa that declared MEK supporters to be enemies of God and condemned to death. It was the year in which clerics, judiciary officials, and representatives of the Intelligence Ministry assembled into “death commissions” tasked with implementing that fatwa all across the country.
Roughly between July and September of 1988, over 30,000 political prisoners, mostly MEK supporters, were killed in the political wards of Iranian prisons. I personally bore close witness to dozens of them and indirect witness to hundreds more. The country’s leading death commission robbed me of many acquaintances, some of whom I only knew in passing from our time of shared imprisonment, while some I had known for years before, as colleagues in the fight first against Iran’s fundamentalist theocracy.
Throughout the massacre, all of us prisoners helped one another to develop an understanding of its details and scale. As we were shuffled in and out of solitary confinement, we communicated via Morse code and shared news of who among us had disappeared, of who had entered the “death hall” and returned, and of what they had seen there. It would be some time before my own experience caught up with the second-hand stories, but I cannot claim that they prepared me in any way for what I would witness when I was finally blindfolded and marched into the death hall myself.

There I expected to be interrogated and perhaps even subjected to a sham re-trial based on Khomeini’s fatwa. I had already been made to confirm my affiliation with the MEK, but I was only vaguely aware of the fact that this alone could be used as grounds for my execution. As I made my way to the death hall, another inmate made it clear to me that before I would be made to face the death commission myself, I would first be shown the outcome of the proceedings. It was clearly the prison authorities’ intention to terrorize us, to confront us with our ultimate destiny in an effort to make us pliable or convince us to disavow our former affiliations.

When my blindfold was removed in the death hall, I was confronted with the sight of corpses lying scattered at the base of a staging area for the executions. On the platform, I saw a dozen MEK supporters who had been taken in before me, each standing on a chair with a rope tied around their neck. I fainted as the authorities began kicking the chairs out from underneath them, but by then, I had seen quite enough to leave me with mental scars that would follow me through my entire life.
But as horrifying as that sight was, I was also able to come away from experience with a sense of pride in my compatriots. From what I saw, each of the 12 people killed before me, and countless others besides, went to their deaths courageously, chanting slogans against the clerical regime and supporting the MEK’s democratic vision for Iran’s future. I saw other examples of the same courage outside of the death hall. The family of one fellow prisoner, Hadi Mohammad Nejad, begged him to do something to save himself, and although he promised to try, he also said that he would not betray his most closely held ideals, even at the cost of his own life.
As I think back on such courage today, I cannot avoid the awareness of how much greater it is than what would be required of Western policymakers in order to hold the perpetrators of this massacre accountable. No one has faced such accountability to date. Quite to the contrary, the leading perpetrators have been systematically rewarded, most recently and most damningly, with the office of president of the Iranian regime.

Ebrahim Raisi was inaugurated to that position on August 5, in a ceremony shamelessly attended by the deputy political director of the European External Action Service. The presence of a European delegation legitimized Raisi’s position at the international level and arguably signaled the intention of Western powers to go on ignoring the 1988 massacre as they have done, more or less consistently, for 33 years. At the time of that massacre, Raisi was one of four officials who served on the Tehran death commission, which directly oversaw executions as Gohardasht Prison, as well as Evin Prison.
My own contact with Raisi was only fleeting, but countless other survivors of the massacre describe him as being even more ruthless than his colleagues and even more committed to implementing Khomeini’s comprehensive order of death for supporters of the MEK. That assessment is seemingly supported by a contemporary document that shows Khomeini extended Raisi’s jurisdiction in the midst of the massacre and entrusted him to remove the “weakness of the judiciary” through an efficient campaign of executions.
Raisi’s ongoing commitment to this strategy was confirmed in 2019 after he was appointed to head the judiciary by the current supreme leader, Ali Khamenei. In that capacity, Raisi oversaw elements of the crackdown on a nationwide uprising, which saw 1,500 peaceful protesters killed in a matter of days, and thousands of others arrested before being subjected to systematic torture. Protests over this crackdown haunted Raisi’s presidential candidacy, and the vast majority of Iran’s population boycotted his election, but Khamenei’s endorsement assured his “victory.”

Since then, Iranian activists have been tirelessly urging the international community to take steps to isolate the new Iranian president and set the stage for his prosecution on charges of crimes against humanity and genocide. In an August conference organized by the National Council of Resistance of Iran, legal scholars said that the 1988 massacre fit genocide because it sought to eliminate all those whose religious identity contradicted the regime’s theocratic fundamentalism.
Those scholars also noted that while Raisi could certainly be brought before the International Criminal Court, he could also be prosecuted by any state in the world based on the principle of universal jurisdiction. Sweden proved this in August by initiating the trial of Hamid Noury, a lower-level participant in the massacre. That decision is now a model of the political courage that should be expected of other Western powers. And if that is not sufficient to spur them to act, those nations’ leaders should think of the thousands of MEK supporters who, in the summer of 1988, chose death over the betrayal of their ideals.

Previous article
Iran News in Brief – October 4, 2021
Next article
Is There a Solution to Iran’s Economic Crisis?