Written by The Editorial Board
7th April 2021 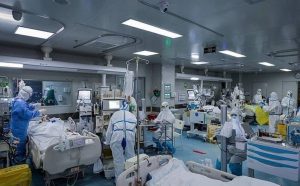 According to the latest reports, coronavirus fatalities are getting close to 245,000, spanning 535 cities across the nation, with 56,000 losing their lives in the capital alone. Officials finally admitted to a bitter reality already experienced by tens of millions of Iranians. “We have lost control of COVID-19”, acknowledged Regime Health Minister Saeed Namaki.
There is no dispute that COVID-19 has revaged virtually every country around the globe. But nowhere has the Government’s response to the pandemic been as irresponsible, inept, mismanaged, and outright criminal as in Iran.
Officials, including the regime’s Supreme Leader Ali Khamenei and his president Hassan Rouhani, who for months denied the severity of the crisis, are now warning of the fourth wave of the virus engulfing the nation and are blaming the people for “not abiding by the health protocols.”


Khamenei’s ban on Covid-19 vaccines prepares the ground for a catastrophe
The fact, however, is that Khamenei and Rouhani bear ultimate responsibility for the staggering death toll. Maryam Rajavi, the President-elect of the National Council of Resistance of Iran, said that the horrific and new wave of Coronavirus was due to the criminal policies of the clerical regime. She added, “With astonishing cruelty, Khamenei banned the import of the British and American vaccines into the country, while refusing to provide the bare minimums for workers from hundreds of billions of dollars pillaged wealth of the Iranian people amassed in institutions he controls. In doing so, he has forced them to go to the COVID-19 killing field to make ends meet.”

The ghastly new wave of the #Coronavirus is taking more lives every day because of the clerical regime’s criminal policies, and Khamenei is the main culprit in this massive loss of lives.https://t.co/CieLMQtiCH

Indeed, in January 2020, the regime covered up the news about the spread of the virus in Iran to ensure a high turnout in its Parliamentary election farce. It refused to quarantine the cities and failed to provide any financial assistance, as most countries have done, to mitigate the impact of people losing their jobs. It monopolized the delivery of hygiene equipment, such as masks and jell, and delayed paying the salaries of tens of thousands of nurses and caregivers, who worked round-the-clock at significant risk, to save the lives of their fellow compatriots.

This criminal policy was part of the regime’s mass casualty strategy to create a barrier against the eruption of uprisings, as was the case in December 2017 and November 2019, when nationwide protests shook the regime to its foundation. When the virus first struck Iran, Khamenei described it as an opportunity and a blessing. The objective was two-fold. The increasing number of fatalities had no doubt a demoralizing impact on a population that had to deal with losing their loved ones and trying to save their own lives. Moreover, with the virus running wild, even the most enraged and vocal people, hesitated to vent their anger in mass gatherings, which would have indeed resulted in becoming infected with the virus.

While effective in the short-term, the policy has backfired, reflected in Kazerun, Khorramshahr, Borazjan, and Sistan and Baluchistan protests in recent months. During the week-long uprising in Sistan and Baluchistan (southeast Iran) in February 2021, the security forces shot 40 protesters and wounded 100 others to quell the protests. That uprising has been followed up by consecutive nationwide strikes and protests by various sectors, including truck drivers, pensioners, workers of Ahvaz Steel and Haft-Tappeh Sugarcane Factory, teachers, students, and nurses and workers in the oil and gas sector, petrochemical refineries, and power plants.
The continuing protests point to the realization by the overwhelming majority of Iranians that as long as this regime is in power, it will neither protect the people from the consequences of floods, earthquakes, and diseases nor from the growing poverty, inflation, and unemployment.

Iran: Raisi’s Ridiculous Claims Only Supported by Khamenei. Why?