Ignore Iran’s Raisi on Tuesday, Arrest Him Another Day 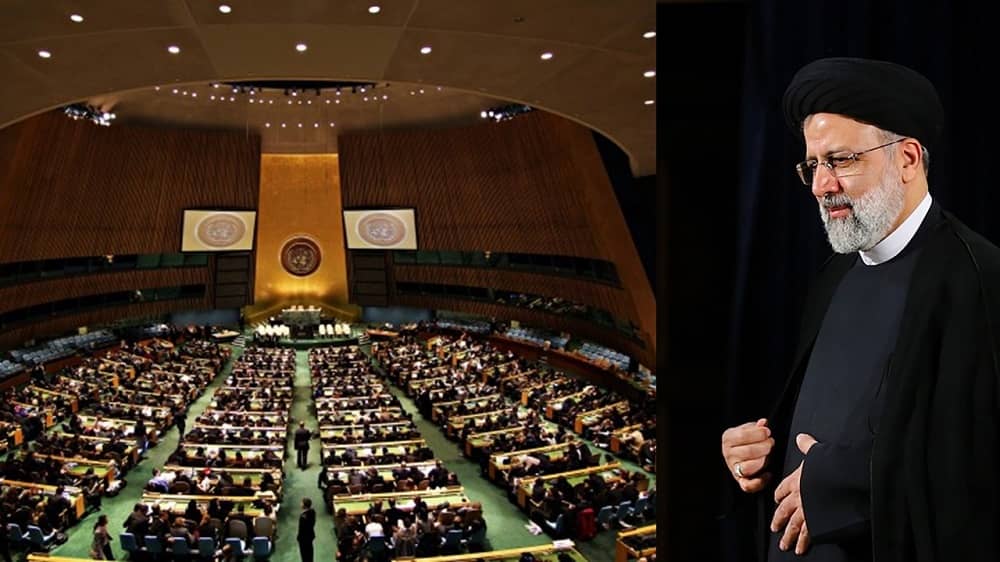 The Iranian regime’s President Ebrahim Raisi is scheduled to address the United Nations General Assembly on Tuesday. With pandemic challenges still not resolved, most of this year’s proceedings will again be taking place virtually, but even allowing Raisi to address the assembly from abroad, or tuning into that address, gives this criminal and the terrorist regime he represents legitimacy.
The Iranian people refused to participate in the June sham presidential election which resulted in Raisi’s presidency, and the Iranian diaspora has spent the ensuing three months tirelessly campaigning for him to be barred from state visits and held accountable on the world stage for crimes against humanity.

A Mass Murderer in the UN, International call to prosecute Ebrahim Raisi

That campaign is set to continue on Tuesday before, during, and after Raisi’s speech. The Iranian expatriate community in Sweden will be hosting a conference in Stockholm to discuss Raisi’s crimes and the failure of political will in the West where such Iranian affairs are concerned. However, the location of that conference is significant insofar as it calls attention to the lone example, in recent years, of a European nation actively pursuing accountability for the perpetrators of the Iranian regime’s worst assault on human rights.
In 2019, Swedish authorities arrested Hamid Noury, a former Iranian prison official, after he arrived in the Scandinavian country for a visit. The arrest constituted Sweden’s assertion of “universal jurisdiction” over Noury’s case, which involved war crimes and mass murder in Iran. The legal principle allows for any nation that is in good standing with international law to prosecute anyone within their own courts if they are believed to be guilty of the most serious international crimes, for which they will not face accountability within the jurisdiction where those crimes took place.
Noury’s crimes rise to the standard of “most serious,” and they are the same as the crimes for which Raisi is most renowned. In the summer of 1988, both men took part, with Raisi being the main element, in the massacre of over 30,000 political prisoners, based on a fatwa from the regime’s founder and first supreme leader, Ruhollah Khomeini. The fatwa placed particular focus on the People’s Mojahedin Organization of Iran (PMOI/MEK), labeling them as enemies of God and ordering regime authorities to annihilate them in defense of the regime.

Insofar as this language reflects a desire to stamp out religious identities that stood in conflict with the mullahs’ theocratic fundamentalism, some legal scholars have argued that the 1988 massacre constitutes genocide. UK human rights barrister Geoffrey Robertson QC and Eric David of the University of Brussels each presented that case in a conference held virtually last month by the National Council of Resistance of Iran. David stated that there would be “no legal difficulty” for any nation that sought to hold perpetrators accountable in their own courts, and Robertson noted that the Genocide Convention effectively makes it obligatory for them to do so if concerned parties cannot secure a UN Security Council resolution leading to charges at the International Criminal Court.
This sentiment is certain to be repeated in Tuesday’s conference, with participants pointing to the Noury case as a practical example of how universal jurisdiction can be used to challenge Tehran’s impunity in matters of human rights. Noury’s trial began last month and is expected to conclude in April. Testimony is anticipated from at least 35 plaintiffs who directly witnessed the former official’s role in torture and mass execution at Gohardasht Prison. The facility was one-two site of an initial wave of executions following Khomeini’s fatwa, pending additional waves at every prison facility throughout the country. The other principal site was Tehran’s notorious Evin Prison, and that where in addition to Gohardash Raisi was present as a deputy prosecutor in 1988, as one of four figures to sit on the Tehran “death commission” that oversaw the entire massacre.

Raisi’s responsibility for the massacre is many orders of magnitude greater than Noury’s. The same appears to be true of the number of eyewitnesses who are prepared to provide their recollections in each case. The NCRI’s conference last month featured more than 1,000 former political prisoners who were detained at the time of the massacre. Many of them observed Raisi in Evin or elsewhere while the massacre was beginning to unfold. Many also reported that his participation was especially enthusiastic and likely helped to set the pace at which sentences were passed and implemented – several hundred per day at the peak of the massacre.
Akbar Samadi, one of 18 former political prisoners to post detailed video testimony of their experiences on the NCRI’s website before the August conference, said that Raisi was present at the interrogation of political prisoners “to ensure that no one would escape execution.” Samadi added that Raisi “tried his utmost to cast as wide a net as possible for the executions, and if somehow Prosecutor Morteza Eshraqi had a different opinion about someone, Raisi would reject it.”
The United Nations General Assembly and the prospective audience for Raisi’s speech should ask themselves whether the person is qualified to lecture the international community about themes like justice and freedom. Furthermore, they should ask themselves what message they would be sent to the Iranian regime, to Raisi himself, to his victims, and to the Iranian people as a whole, if they choose to listen to his speech even though it means turning their attention away from the activists calling for his arrest and prosecution.

The 1988 Massacre of Political Prisoners in Iran: Eyewitness Accounts, Akbar Samadi
Raisi’s virtual address provides no opportunity for the United States or any other Western nation to implement universal jurisdiction and arrest him against the backdrop of the General Assembly. Human rights advocates should instead view it as an opportunity to command his silence, to highlight the details of his crimes in ways that will raise the political will for sanctions, diplomatic isolation, and ultimately prosecution of the regime’s president at some later date.

Previous articleIran’s Raisi Wants to Combat Corruption With a Controversial Cabinet
Next articleIran: Regime’s Coronavirus Policies Takes the Lives of More Than 431,000