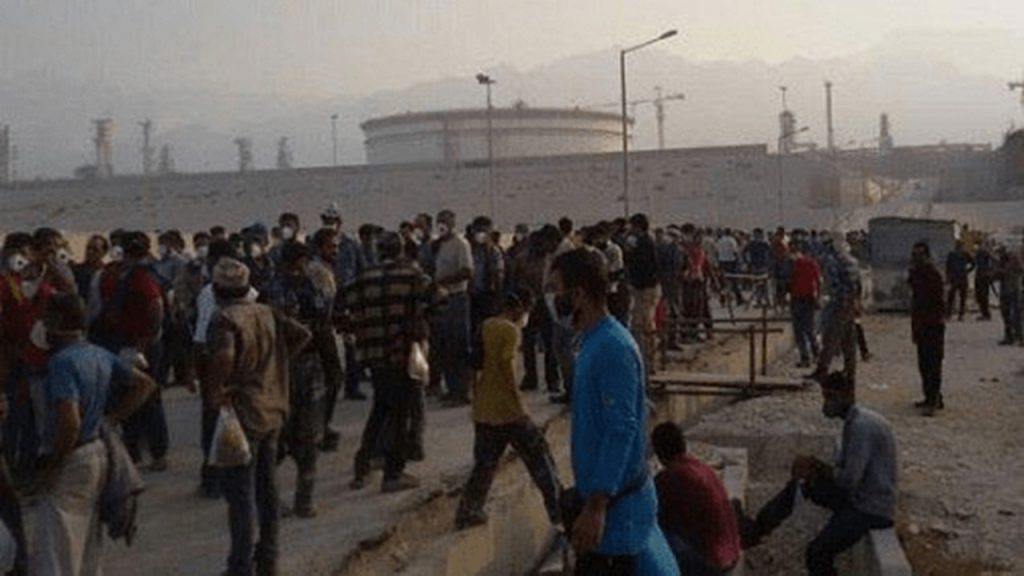 Today, Thursday, August 6, 2020, on its sixth day, the strike by workers and employees of oil and gas facilities and refineries spreads to 18 cities in 11 provinces. The strike began in the provinces of Khuzestan, Bushehr, Hormozgan, and Fars on Saturday, August 1, and spread to the provinces of Isfahan, West Azerbaijan, East Azerbaijan, Ilam, Khorasan Razavi, Sistan and Baluchestan and Markazi in the following days.

In some refineries, such as Isfahan, the security forces tried to prevent the striking workers from leaving the facilities but failed due to their resistance.

Workers in many refineries and oil facilities, including in Abadan, Kangan, Lamerd, Parsian, Isfahan, Assaluyeh, Mashhad, Mahshahr, etc., have left workers’ living quarters and returned to their hometowns.

The striking workers are suffering from intolerable working conditions in extreme heat and very difficult living conditions. They do not have job security, because they have been forced to sign temporary contracts. Nor are they covered by health insurance, nor do they receive pensions.  The employer can fire them at any time. Their wages are many times lower than the poverty line, and even these meager wages have not been paid for several months.

In another development, workers at the Haft Tappeh Sugarcane Industrial Complex in Shush began their 53rd day of strike today. The workers said they will continue their protests until their demands are met, including the dismissal of a regime-affiliated official who took over the complex under the guise of privatizing the company.

Mrs. Maryam Rajavi, the President-elect of the National Council of Resistance of Iran (NCRI), hailed the striking workers and again called on the labor rights organizations and trade unions to condemn the anti-labor policies of the clerical regime and to support the protests and strikes by Iranian oil workers. She urged the International Labor Organization (ILO) to blacklist the clerical regime for violating workers’ rights and suppressing them.