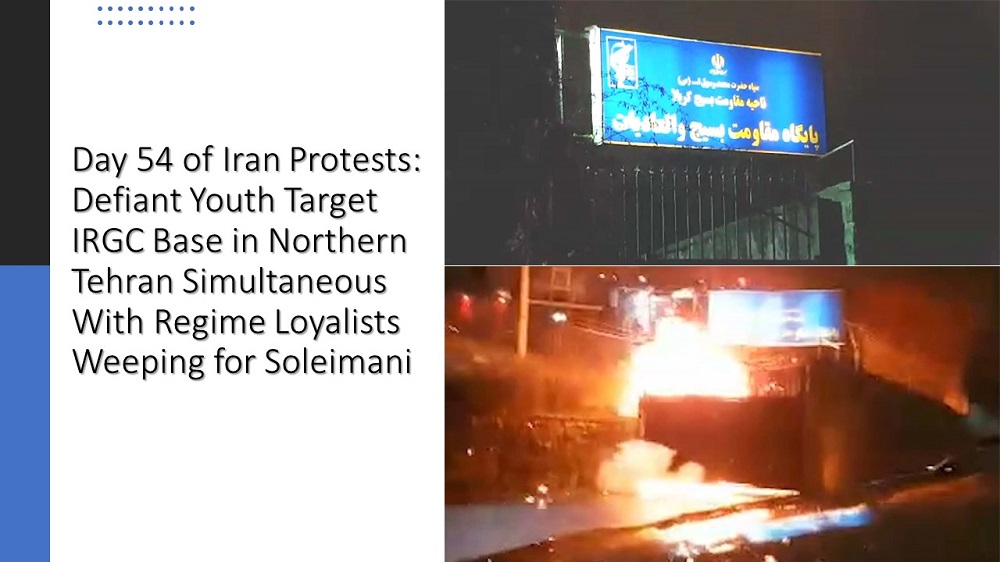 Tuesday, January 7, 2020, marks the 54th day since the beginning of the nationwide Iran protests. Defiant Youth Target IRGC Base in Northern Tehran Simultaneous With Regime Loyalists Weeping for Soleimani.

IRAN: TORCHING POSTERS OF SOLEIMANI AND BASSIJ BASE AMID REGIME’S STREET CIRCUS.

While the clerical regime’s circus regarding Qassem Soleimani, the notorious terrorist Qods Force commander, and the roadshow with his corps continues, in the early hours of this morning, defiant youth torched Soleimani’s posters in Tehran and other cities, including Karaj, Bandar Abbas, and Yassouj. Simultaneously, the base for the paramilitary Bassij force in Lordegan, western Iran, was set ablaze. 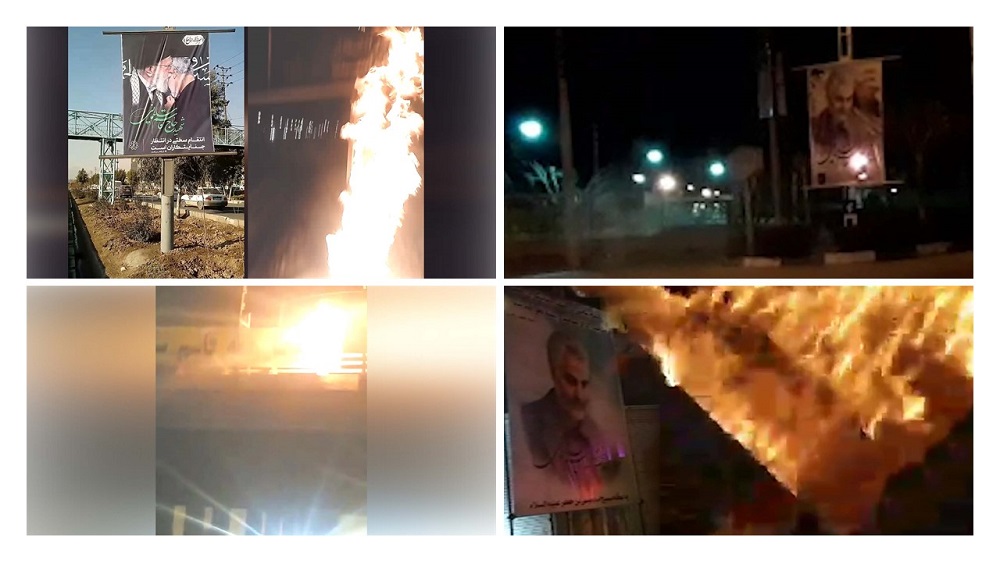 Emphasizing on the Internet blockage during Iran Protests, Iran HRM “urges the international community to hold the mullahs accountable for their Crimes Against Humanity and stand by the Iranian people in their struggle to achieve their basic Human Rights”

Qassem Soleimani was one of the most vicious criminals of Iran’s history. He was personally involved in the massacre of hundreds of thousands of people in the region and in driving millions of others from their homes.

January 5, 2019—Members of “Resistance Units” and supporters of the Iranian opposition People’s Mojahedin Organization of Iran (PMOI/MEK) across the country are celebrating the death of former Revolutionary Guards (IRGC) Quds Force chief Qasem Soleimani. These brave individuals are torching icons of the mullahs’ regime, taking to graffiti and putting up signs, along with celebrations of the death of Soleimani, a man responsible for the deaths of hundreds of thousands of people in Iran, Iraq, Syria and across the Middle East.

IRANIANS IN THE U.S. CELEBRATING THE DEATH OF THE REGIME’S LEADING TERRORIST QASSEM SOLEIMANI.

In the early morning hours of Monday, January 6, 2020, simultaneous with the clerical regime’s weeping ceremony for Qassem Soleimani, the terminated criminal terror chief of the Qods Force, defiant youth targeted the paramilitary Bassij base in Lavizan Street, north of Tehran, affiliated with the IRGC’s so-called Muhammed Rassoulollah Division.

In the early hours of January 6, 2020, Resistance units posted banners carrying pictures and messages of Mrs. Maryam Rajavi, the President-elect of the National Council of Resistance of Iran (NCRI), and Mr. Massoud Rajavi, the Leader of the Iranian Resistance, in Tehran, Isfahan, Karaj, Ahvaz, Kermanshah, Zanjan and Sari.

Read more: Day 53 of the Iran Protests for Regime Change