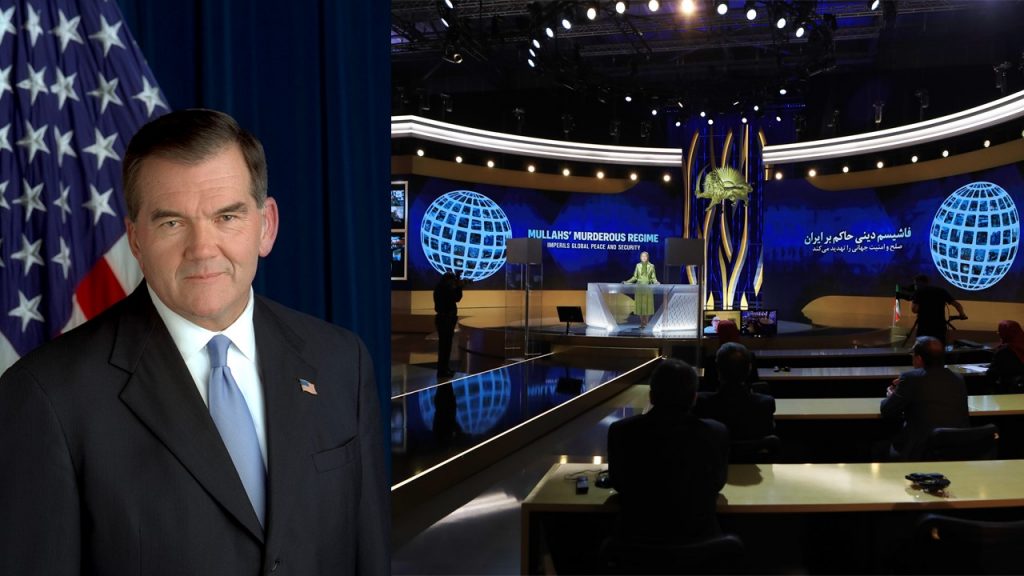 Over the past 40 years, the Iranian regime has been using its embassies throughout the world for the export of terrorism and assassinating its opponents. Following the nationwide Iran protests in 2018, during which the Iranian Resistance played a leading role, the crisis-riddled regime in Tehran has increased its terrorist activities against its viable alternative. These terrorist plots are in line with the regime’s incessant demonizing campaign against the People’s Mojahedin Organization of Iran (PMOI/MEK) and desperate attempts to tarnish the Resistance’s image, thus, legitimizing terrorism against the Iranian opposition and its members.

In July 2018, Assadollah Assadi, the Iranian regime’s diplomat– terrorist in Austria, was arrested in Germany. He had previously transferred explosives to two other terrorists tasked to bomb the Iranian Resistance annual “Free Iran” gathering in Paris on June 30, 2018.

In March 2018, Albanian authorities arrested two terrorists, who were trying to bomb the Iranian Resistance’s gathering on the eve of the Persian New Year (Nowruz) in Albania. This event was attended by Mrs. Rajavi, as well as renowned American and European dignitaries.

The regime’s failed terrorist attempts have resulted in the expulsion of its ambassador, its so-called diplomats, and its agents, as well as the closure of its so-called cultural center.

Gholamhossein Mohammadnia, the regime’s ambassador to Albania, and Mostafa Roudaki, the Intelligence Ministry’s (MOIS) station chief in that country, were expelled from Albania and were considered as persona non grata for their role in pursuing terrorist plots against the MEK. In January 2020, two other so-called “diplomats” were expelled from Albania for their role in terrorism. In July 2020, the Albanian government another Iranian regime operative for spying on the MEK and attempting to penetrate MEK’s complex Ashraf 3. This person, identified as Danial Kasrai, holds Italian citizenship and was previously exposed by the Iranian Resistance as one of the MOIS agents in Albania.

In addition, in a statement in June 2019, the National Council of Resistance of Iran (NCRI) wrote: “Following the expulsion of Gholamhossein Mohammadnia, clerical ambassador to Albania and Mostafa Roudaki, head of the intelligence station in December 2018, the clerical regime is attempting to send its spies and terrorists to Albania to inflict a blow to the PMOI under the business and journalistic covers.”

During the NCRI’s “Free Iran Global Summit,” Mrs. Rajavi said: “Terrorism is the essence and fundamental nature of this regime and it is inseparable from it. … If someday, the regime abandons the export of fundamentalism and terrorism abroad and limit itself within Iran’s boundaries, it will implode and disintegrate.”

Other speakers of the third day of the “Free Iran Global Summit,” reiterated that regime’s ongoing terrorism once again highlights the necessity to close the regime’s embassies and representative offices, and expelling the regime’s agents and operatives who function under the cover of commercial, cultural, or religious activities, or who pretend to be journalists or opponents, refugees, or ordinary citizens.

One of the speakers of this event was the United States first Homeland Security Secretary and former Governor of Pennsylvania, Mr. Tom Ridge.

The following is the full text of Governor Ridge’s speech.

The global summit may be at least to date unprecedented in its scale and its mission. Think about this for a moment. The organizational creativity and the ingenuity and the technical skills that brought together individuals from over 100 countries at 30,000 locations in support of the NCRI, in support of the patriots of Ashraf, in support of the freedom-loving people of Iran, I don’t believe to date that any enterprise or any organization, large or small, government or private sector, has undertaken such an extraordinary effort with such unique and powerful results. One would think that if you take that ingenuity and creativity and commitment to excellence and that positive reach and positive connection globally, if you took that mindset that exists outside of Iran and you relocate it inside Iran, what a different, positive place the country would be at this point. Particularly build on the history of Persia. Build on the incredible educational capabilities and intellect of the Iranian people. You take all that and put it on the history and the foundation of the existing population within Iran, what an incredible place Iran would be and how it would reemerge in the global community as the peace-loving intellectual leader not only within the country but within the region.

The tentacles of terrorism still reach out from Tehran. Rouhani and the mullahs and their oppressive regime have turned their backs on the people of Iran. They have probably squandered billions of dollars, as President Bush said back in 2002, they were part of the axis of evil, spreading their evil with those tentacles of terrorism throughout the world. Instead of using those dollars that they had at their disposal to enhance the quality of life of the citizens of Iran to improve educational opportunities to help people remove themselves from the restraints of poverty, they’ve used it to continue to export their terrorism and repression around the world. Let us make no mistake about it. Permit me to start with the countries where their tentacles have reached and influenced. Iraq. There is a hidden occupation of Iran in Iraq. Syria. Saudi Arabia, Yemen, as far as Argentina. Lebanon. And I know I am missing many more, but that’s just the point.

We have also learned over the past several years that appeasement doesn’t work. Just completed several books on Churchill. One of the chapters focused on Neville Chamberlain’s multiple meetings with Hitler and his announcement after the final meeting concluded when he returned to London and he said, “peace is at hand.” And we know how appeasement to that rapacious, oppressive, individual worked out. But we have got to learn some lessons from history. Appeasement with the Iranian government will not lead to peace. It never has, and it never will. So we need to ask these countries where they’ve established these embassies to rid themselves of their diplomatic corps, particularly in those countries where we can identify terrorist activity, much of it built and designed to undermine those governments in and of themselves.

It is time for the world to embrace regime change. It’s time for the world to recognize that within the NCRI, this incredible organization led by a leader who has been able to generate over the past 15 years that I’ve been working with this group global support for her vision, and the vision of Iran, a non-nuclear Iran that understands and promotes gender equality, freedom of speech, separation of religion and state. So, I say to those that have participated during the past three days of this unprecedented summit, for those who continue to publicly, loudly, and consistently proclaim their support for the NCRI and for the freedom-loving people of Iran, that I’m very proud to be part of this group. It grows larger and more global every year.

I will say finally to the residents of Ashraf 3, I have followed your history since you worked with the U.S. Army way back in Iraq, and you have no greater supporter and someone who loves you more than our mutual friend Wes Martin. So, I have heard many stories about your individual acts of bravery and sacrifice. And I’ve known full well what you’ve endured at Ashraf 1 and Ashraf 2, and I’m grateful that the people of Albania and the government of Albania has embraced you and given you a place to at least call your temporary home until we meet again in Tehran. But the struggle, the sacrifice, and your commitment frankly is an inspiration to all of us who have joined together over the past decade plus to see to it that someday you have the opportunity to return and rebuild on the history and the tradition of the glorious world of Persia a new and peace-loving Iran.

I am pleased to be on that mission with you. And I plan on staying with you as all of the others who have participated in this three-day global summit to remain with you until we achieve victory, and when we’ll be dancing together in the streets of Tehran. I am grateful for the opportunity to work with you, grateful for the opportunity to be associated with such a distinguished group of global leaders, parliamentarians, human activists, and thank you for that opportunity. May God bless you on your journey to a free, independent, and non-nuclear Iran.