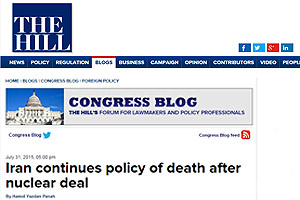 Some people claim that the Iran Nuclear Deal will usher in a new era of moderation and the development of Iranian civil society; however, the facts on the ground and the state of human rights in Iran paint a very different picture, writes Hamid Yazdan Panah.

“Currently, the Iranian regime leads the world in per capita executions. By adopting a ‘policy of death’, Iran continues to escalate the rate of executions and mass repression while the international community remains hardened in its silence,” Mr. Yazdan Panah wrote on Friday in The Hill.

“Just weeks after signing the ‘historic’ deal and more than eight months after signing an interim agreement, Iran is in the midst of what Amnesty International has referred to as an ‘unprecedented spike’ in executions. Currently, Iran’s new ‘moderate’ administration is on pace to hit a new 12 year high in executions. The regime continues to suppress this information and routinely under-reports the actual number of executions. Amnesty International has noted that while the regime officially claims that only 246 executions have taken place in 2015, this number is closer to 700 in reality,” he added.

“The swiftness and scale of these killings are reminiscent of the 1988 massacre of prisoners in Iran, in which thousands of political dissidents were systematically executed in a matter of weeks, some of whom had already completed their sentences. The majority of the prisoners executed were prisoners of conscience, and were denied any form of due process. To date, there has been no independent investigation of the massacre, but rights groups have called the massacre a crime against humanity.”

“The majority of those tried and executed are charged with crimes against the State, or drug trafficking. A report by the UN Special Rapporteur on human rights in Iran, concluded that trials involving drug charges ‘never last more than a few minutes.’ The execution of individuals for drug related crimes is a blatant violation of international law, which reserves capital punishment for only ‘the most serious crimes’. Opposition activists have accused Iran of using drug charges against dissidents in order to mask repression and besmirch the activities of dissidents.”

“The West is not only complicit in whitewashing the crimes of the Iranian regime, but has actually financed Tehran’s policy of death directly. The United Nations Office on Drugs and Crime has given more than $15 million to Iran since 1998 in order to fight the ‘war on drugs’ and most of this money comes from European nations, despite their own opposition to the death penalty.”

“Despite the bleak human rights situation in Iran, hope is found within a vibrant dissident movement that remains defiant inside the country. This sense of hope continues to grow, but it is not a hope predicated on political agreements, or fictitious ideas surrounding reform or moderation. It is hope for true change that drives dissidents to risk their lives to call for fundamental democratic shifts in Iran, seeking to replace a Supreme Leader with equality and justice.”

“Those who claim that a nuclear deal with Iran presents hope for human rights never identify a mechanism through which this supposed change will occur. They blatantly ignore the true nature of this regime and its systematic repression of its own people. In doing so they ignore the struggle of Iranian dissidents, who continue to struggle for real democratic change in Iran.”

“In June of 2015, Atena Daemi was sentenced to 14 years in prison, based on her activities which included campaigning against the death penalty, and criticizing the regime online. She is just one of many examples of brave Iranian dissidents who continue to struggle and organize against this regime. The real hope for change is in supporting and recognizing the legitimate aspirations for freedom by the Iranian people.”

“Iran’s policy of death is no accident. Nor is it a product of willful ignorance by theocratic rulers in Tehran. The policy surely hurts Iran’s image abroad, yet the regime appears to have no choice but to continue to undertake terror and repression in order to maintain its grip on power. The simple truth is that it fears its own people more than international pressure,” he added.

Previous articleIran: Call for protest against death sentence for political prisoner Mohammad-Ali Taheri
Next articleJulie Ward MEP speaks out on the situation of women in Iran