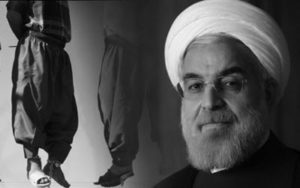 Just last week, the Iranian regime took two virtually simultaneous provocative steps by resuming the enrichment of uranium to 20 percent fissile purity and also seizing a South Korean chemical tanker in an apparent bid to extort the Asian nation of seven billion dollars that are currently frozen in accordance with US sanctions.

Tehran’s disinterest in cooperative relations with foreign powers could hardly be clearer. Yet many Western leaders continue to press for policies that are designed to facilitate that cooperation, particularly through negotiation with “moderates” who are supposedly in charge of the regime’s executive. In this sense, they are parroting talking points that have been prevalent since the 2013 election of Iran’s current president, Hassan Rouhani, but that actually go back to the early days of the Iranian regime.

For Western policymakers, Iran is frequently the object of fantasies about an easy transition to governance, brought about through trade and negotiations that just happen to also serve European and American economic interests.

That fantasy has been put on display against the backdrop of some of the Iranian regime’s worst crimes. In 1988, when “death commissions” in prisons all throughout the country were systematically executing 30,000 political prisoners, Western media were running stories that insisted social reform was on the rise in Iran because, for instance, the Ayatollah had announced that people would be permitted to play chess in public.

This mistake was never corrected, and as far as mainstream Western policy is concerned, the 1988 massacre has been largely swept under the rug. It comes as no surprise, therefore, that the international community has similarly swept lesser crimes under the rug in more recent years, while Iran was supposed to be going through a period of reform brought on by Rouhani’s election.

How many Western policymakers – and how many of their constituents – are aware of the fact that in November 2019, Iranian security forces killed upwards of 1,500 defenseless protesters during a mass uprising in which the public demanded economic reforms and the wholesale replacement of the existing theocratic regime? How many of those policymakers conveniently overlooked this fact because it contradicts their narrative of an Iran wherein at least one powerful faction is always open to negotiation and advice from the international community concerning human rights, democratic principles, and regional conduct?

It should be easy to recognize how this narrative puts the Iranian people at dire risk in the wake of nationwide uprisings and in the midst of a coronavirus outbreak that has been so badly mismanaged as to kill over 203,000 people in a nation of 82 million. That figure, reported by the National Council of Resistance of Iran (NCRI), is roughly four times higher than the latest figures released by Iran’s Health Ministry. Such a lack of transparency, during such a severe crisis, is not indicative of a regime that is on the brink of reform.

With these sorts of destructive lies circulating inside Iran, the Western world should have no appetite for taking seriously anything that Tehran says on the international stage. The regime promises to resume compliance with the nuclear deal if and only if the US suspends sanctions and apologizes for previous administration’s policies. This promise, as insulting as it is, is also devoid of value. Neither the US nor the Europeans should deign to give it oxygen.

Unfortunately, recent, tepid responses to Iran’s nuclear ultimatums and the tanker seizure indicate that many of the Europeans can be expected to continue counselling the new administration in the US to cut a deal with Rouhani before his supposedly moderate administration comes to an end. What’s more, this pressure will certainly be amplified by pro-Iran lobbies inside the US, such as the National Iranian American Council (NIAC).

That organization has a long history of parroting regime talking points, but it has always done so in service of the extremely palatable lie regarding a split between hardliners and reformists at the head of Iranian institutions. For the sake of preserving the Iranian economy and alleviating pressure on the religious dictatorship, NIAC has consistently promoted the idea that large-scale reforms could be just around the corner in Tehran, if only the international community would provide enough concessions.

In reality, those concessions would only encourage more of the same malign behavior that was on such prominent display last week. But entities like NIAC are sure to provide an outpouring of advocacy for those concessions in the relatively narrow window between now and the time Rouhani departs his office. During that period, perhaps more than any other, anyone who is aware of the seriousness of the Iranian threat must put forth all the effort they can to prevent both the US and Europe from falling back upon old habits and relinquishing pressure on a regime that is fundamentally incapable of reforming itself.

Previous articleIran News in Brief – January 19, 2021
Next articleMEK Supporters’ Rally in Sweden Echoes Call for Justice Over 1988 Massacre in Iran

Since the beginning of 2021, the global vaccination process has accelerated to combat the Covid-19 pandemic. Yet, in Iran under the mullahs’ regime, that...
Read more
Iran News Now