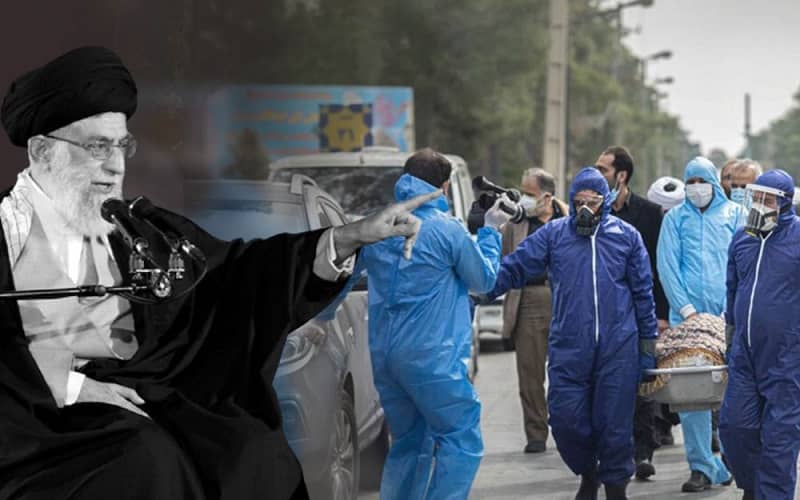 Last week, Iranian regime’s Supreme Leader Ali Khamenei made a shocking but not unexpected announcement. As the regime’s ultimate authority, he said that Iranian medical facilities would not be permitted to import coronavirus vaccines that were manufactured in the United States or Britain.

The announcement led to the cancellation of an arrangement that had already been established between the Iranian Red Crescent and unnamed American philanthropists. Had Khamenei not interfered, 150,000 doses of the Pfizer vaccine would most likely be en route to Iran right now. There is no plan for how to compensate for this loss. The Iranian Health Ministry claims to be overseeing development of a domestic alternative, which Iran’s pharmacists called a “joke”, especially compared with existing vaccines that are over 95 percent effective.

The Red Crescent’s loss threatens to be devastating not only for the 150,000 Iranians who might have received the vaccine but also for the countless others whom those recipients are sure to come in contact with while Iranian society struggles to continue functioning normally in the midst of the single worst coronavirus pandemic in the Middle East. Ordinary citizens have received no support from the regime, which has refused to seriously enforce lockdowns for a people who are overwhelmingly struggling to make ends meet. Consequently, Iranians have no option but to go to their jobs or seek new ones while being as careful as they can manage.

But conscientious behavior by the public is not especially effective when the regime won’t even be transparent about the extent to which the infection has penetrated every community and affected every demographic. According to the regime’s statistics, there are over one million total cases of Covid-19 in the country of about 82 million, with more than 56,000 fatalities so far. But the true figures are much higher in both cases – about four times higher in the case of fatalities.

The People’s Mojahedin Organization of Iran (PMOI/MEK) has carefully tracked the outbreak since before it was officially acknowledged by regime authorities. According to reports tallied by the MEK the death toll stands at over 200,000, owing to drastic regime’s mismanagement, rampant disinformation, and early developments that served to dramatically accelerate the pace of infections while the government was still being kept in the dark.

In January and February, regime authorities held the anniversary celebrations for the regime and then their sham parliamentary elections, even both events received a national boycott. It was only two days before those elections when authorities announced the first Covid-19 death in Iran. But the Iranian Resistance later uncovered documents showing that coronavirus infection had been identified in domestic hospitals as early as late December.

Tehran has gone to great lengths to hide the results of this situation ever since. But paradoxically, the authorities have also sought to emphasize the seriousness of the outbreak at certain times, specifically in discussion with Western powers that may be interested in helping to combat the pandemic on a global scale. Selective acknowledgment of the crisis served as a highly convenient tool for the regime’s officials to use in appealing for sanctions relief at a time when their hold on power was being weakened by international sanctions.

Figures like the regime’s Foreign Minister Javad Zarif made a routine of insisting that Tehran was managing the coronavirus effectively but that long-term success in curtailing the outbreak would depend on regaining the access to foreign markets that had been cut off by international sanctions. This was always nonsense, since the sanctions in question included explicit exemptions for medical goods.

Khamenei’s ban on foreign vaccines should have proven beyond a shadow of a doubt that Tehran was never actually serious about wanting to use sanctions relief in order to fight coronavirus. Had the international community capitulated to early appeals, it would have only resulted in the regime being handed new infusions of cash while the Iranian people continued suffering far more severely than any neighboring population.

In rejecting the Pfizer vaccine and other Western-manufactured alternatives, Khamenei has sent a clear message that his regime does not actually want the proffered foreign assistance in managing the public health crisis. By extension, he has confirmed that the clerical regime only wanted access to foreign capital as a way of shoring up its own power, and was all too willing to use the pandemic in order to get it.

Of course, the desire for money does not necessarily belie Tehran’s intentions regarding management of the outbreak. However, if Khamenei or the Revolutionary Guards had any intention of using financial resources in order to help their people, they already could have released any of the hundreds of billions of dollars in assets that they personally control. Instead, these have remained either untapped or earmarked for the regime’s destructive interventions in the region.

The holdings of religious foundations and other such state-linked institutions have not been used to purchase foreign vaccines; they have not been used to help Iranians survive while staying at home; and they haven’t been directed toward any sweeping domestic research and development program like that which yielded multiple effective vaccines in the West. In other words, Tehran’s real strategy has become one of herd immunity, with acceptance of all the death that entails. Simply the regime intends to use Covid-19 mass casualties to quell the restive society.

Giving the regime money or access to foreign markets will not change the situation in Iran. Quite the contrary; only the continued application of serious pressure on regime authorities will compel them to take actions that will really help people. The acceptance of foreign vaccines is certainly one such action, but in the wake of Khamenei’s announcement, the representatives of the international community should be present at the distribution of those vaccines to make sure that the authorities don’t sell them further down the supply chain or throw them away in order let the outbreak grow worse and lay the foundation for issuing new demands for international sympathy and permissiveness.

Anyone who was advocating that permissiveness in previous weeks should ask themselves: What would have become of vaccines, or the money for vaccines, if they were donated before Khamenei made his position clear? Helping the Iranian people is both noble and vital, but if it is channelled through entities affiliated with the clerical regime, it is a waste of resources and good will.