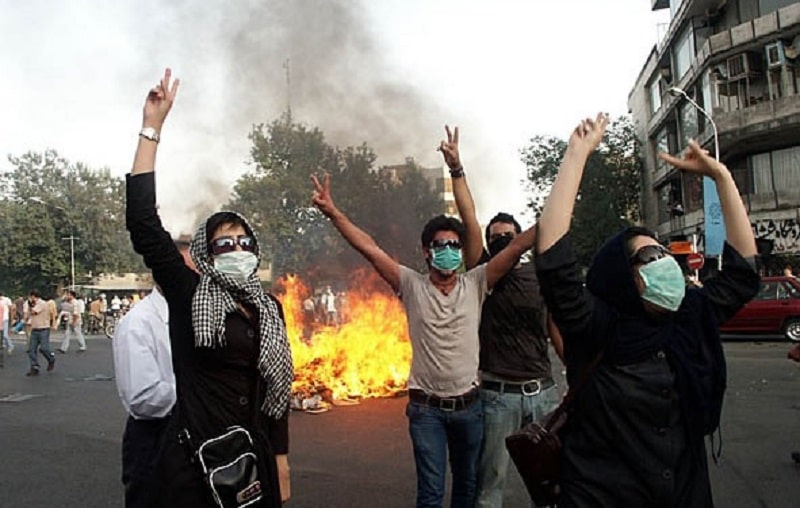 As the Covid-19 death toll continues to rise in Iran, state-run media acknowledge the regime has used this virus to quell society and use people as a human shield to popular protests.

“In recent months, officials have announced various statistics on the Covid-19 death toll, which has confused the people. On the other hand, the government has been reluctant to use scientific methods and vaccinations and has caused more concern among the people. Involving people in the problems caused by the Covid-19 pandemic, such as [grappling with] the disease and the economic pressures of the business downturn, deprives them of the power and incentive to pay attention to the way public affairs are run. It allows the [regime] to move toward its goals, ignoring the public interest,” wrote the state-run Jahan-e Sanat daily in an article titled “are politicians interested in Covid-19 pandemic?” on Monday.

“Although the coronavirus crisis delays the conflict, delaying it at the cost of overwhelming issues is a challenge in society. In other words, when society is freed from the clutches of this disease, political, social, and economic faults will begin to move with greater destructive power,” Jahan-e Sanat wrote, warning the regime of upcoming protests.

Since the Covid-19 outbreak, the regime, mainly the regime’s Supreme Leader Ali Khamenei, embraced this deadly virus and called it a test and blessing. Having the foundation of his regime rattled during November 2019 uprising, Khamenei initiated an inhumane Covid-19 policy. This policy included inaction and cover-up, premature business reopening, and in a word, sending people to the Covid-19 minefield.

“People can solve many major problems by praying. In our opinion, this test is not that big a deal. There have been greater tests. My final point is that this is a passing issue. It is not something extraordinary. These sorts of incidents happen in the country. Of course, I do not want to minimize the issue, but let’s not make a big deal of it. It has happened, which, God willing, will not last too long. It is taking place in the country. Afterward, the [Covid-19] will clear off and leave. But it brings experiences, and the actions of people and government will remain an achievement. Thus, it will become a blessing,” Khamenei said on March 3, 2020.

Khamenei reaffirmed his decision to mass murder Iranians to keep his regime, when in January 2021, he banned the entry of certified Covid-19 vaccines in Iran, ending the regime’s vaccination hoax, blaming sanctions for not procuring vaccines.

While deceptively using the word “governments,” Jahan-e Sanat’s article acknowledges how the regime used the Covid-19.

“With the spread of the Covid-19 pandemic and the creation of heavy national quarantines and the banning of citizens from public places, it seems that governments have reached a kind of calm. In areas where there were political protests, these protests have calmed down. Governments strive to make the most of this extraordinary opportunity to re-establish order in their societies,” read the article.

In another article on Monday, Jahan-e Sanat further underlined while the regime took the inhumane coronavirus policy.

“We faced the Covid-19 pandemic, while we were by no means prepared for a new crisis because we were already involved in several crises, including dire economic, political, international, and social crises,” read Jahan-e Sanat’s article.

This article also acknowledges part of the regime’s Covid-19 policy. “Since early March 2020, there have been sharp contradictions between officials’ statements about Covid-19. Some officials joked about the disease and denied it had entered the country. These cases have led to a slow pace of patient care and an increase in the overall prevalence of pandemics and mortality. Some officials are involved in various fringes when they do not have time to make the right decisions about issues and crises. Even in the face of problems, they send the wrong message to society. Just when they have to give the right information to people in order to gain their trust, they spread untrue and false messages in society,” read the article.

“In the first two months of the outbreak in Iran, after Wuhan, Iran has ranked second in the world in terms of the Covid-19 outbreak and introduced as an epicenter. The reason was that although the whole world closed its borders to China, Iran expanded its traffic more than before. During this period, many people died due to Covid-19, and as a result, Iran’s economy was severely damaged,” Jahan-e Sanat article adds, quoting Said Moidfar, one of the regime’s sociologists.

“A few months before the Covid-19 incident, we witnessed events such as the November 2019 protests and shooting down the Ukrainian plane. The government has caused deep divisions in the country, both domestically and internationally. The country then entered a cycle of inefficiency, corruption, and severe mistrust between the people and the [regime],” The article read.

“All these cases marked the next events, namely November 2019 [uprising]. The [regime] is now in international isolation. Unfortunately, people paid a lot for this, but they still did not get anything. That is why all these cases have caused a concentration of crises in Iran. In my opinion, you should be afraid of these crowds, maybe one day the people will be exhausted. Then acting will be useless. Today, people are worried about the future of society and their lives because society is on the verge of great crises. If crises pile up and the rulers do not listen to the voices of the protesters, the continuation of such a phenomenon can end the patience of the people. If there is no change in Iran soon, the mental state of the society will soon become more dangerous,” Moidfar warned the regime.