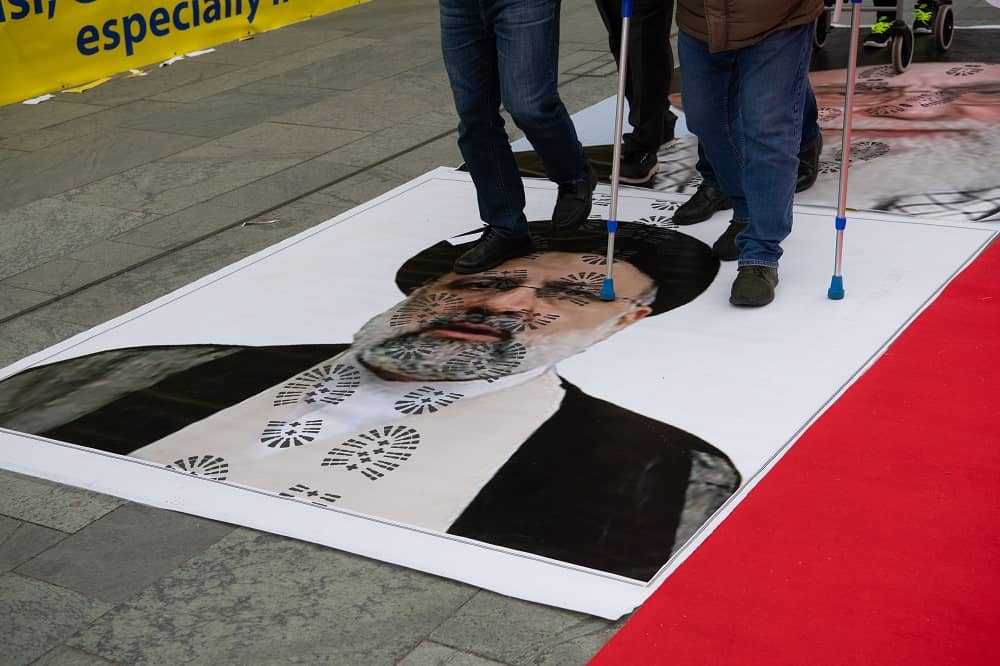 Iranian activists have been calling for the arrest of Ebrahim Raisi, the Iranian regime’s president since before he took office in August. Leading those calls are survivors and the families of victims of the regime’s 1988 massacre of political prisoners. Over 30,000 political prisoners are believed to have been executed over the course of about three months that year, with around 90 percent of the victims being members or supporters of the leading pro-democracy opposition group, the People’s Mojahedin Organization of Iran (PMOI/MEK).

The National Council of Resistance of Iran has organized a number of conferences and rallies in recent months to highlight the 1988 massacre, Raisi’s criminal background, and its likely impact on the future conduct of his administration. As one of four members on a panel during the 1988 massacre that came to be known as the “death commission,” Raisi was one of the leading perpetrators of that massacre. He has also remained as one of its chief defenders in recent years, even characterizing the underlying fatwa from then-Supreme Leader Ruhollah Khomeini as an unquestionable conveyance of the will of God.

That fatwa declared that support of the MEK constituted “enmity against God” and made an individual into an apostate, worthy of death. In at least one of the NCRI’s recent conferences, European legal scholars argued that the fatwa’s language communicates the regime’s intention to wipe out entire communities of moderate Muslims whose ideology posed a threat to that of the mullahs. This would seem to make the 1988 massacre an instance of genocide, and Raisi a prominent perpetrator of that crime.

This assessment underlines the legal viability of Iranian activists’ ongoing calls for Raisi’s arrest. The principle of universal jurisdiction allows for any country to prosecute crimes like genocide domestically, even if those crimes took place elsewhere at the hands of individuals otherwise not subject to that jurisdiction. There should be no question whatsoever about the appropriateness of that principle in instances where genocide has gone unpunished for over 30 years, least of all when the perpetrators of that genocide have been rewarded by their government with positions including the presidency.

Iran: The 1988 Massacre Of Political Prisoners Amounts To Genocide

History and Background of 1988 Massacre

The specific charge of genocide is not necessary for the application of universal jurisdiction, however. This is clear from the fact that one participant in the massacre has already been arrested outside of his home country, and his case does not mention genocide. Hamid Noury instead faces charges of war crimes and mass murder in a Swedish court, on account of the actions he undertook as a prison official circa 1988. Dozens of survivors of the massacre have given evidence against him, and many of them have since joined the calls for Raisi to be arrest too.

Those calls grew stronger in recent days when it was reported that the Iranian regime’s president would likely visit Scotland for the COP26 climate change conference in early November. The event offers a prime opportunity to local authorities to execute an arrest warrant, be it for genocide or for other crimes against humanity. But in absence of such an arrest, Raisi’s attendance at the event would provide him with undue international legitimacy and send the message that Western powers are uninterested in demanding accountability for the Iranian regime’s crimes against its own people, both historic and recent.

Tragically, Western nations have already sent that message on at least two occasions: once when the European Union sent a delegation to attend Raisi’s inauguration in August, and once when the United Nations General Assembly permitted Raisi to address the international gathering with pre-recorded remarks. In both cases, Iranian expatriates staged protests in both Europe and North America to condemn the new administration and demand an assertive shift in Western policies toward the Iranian regime.

The UK’s posture in the run-up to COP26 will partly illustrate whether these appeals have found a substantial audience in Western policy circles, or whether they have fallen on deaf ears yet again. This in turn points to an observation that the NCRI’s President-elect Mrs. Maryam Rajavi made in a worldwide virtual summit organized by the NCRI in July. “As far as the international community is concerned,” she said of Raisi’s ascendance to the presidency, “this is the litmus test of whether it will engage and deal with this genocidal regime or stand with the Iranian people.”

At the same event, Rajavi predicted that the coming months would be marked by a growth of conflict between Iranian authorities and civil society. If that prediction proves accurate but Raisi’s legitimacy remains unchallenged internationally, the outcome will most likely be dire for Iran’s activist community.

In November 2019, about 1,500 peaceful protesters were killed in a matter of days following the outbreak of a nationwide anti-government uprising. At the time, Raisi was head of the judiciary and thus played a key role in the crackdown. His repressive role is certain to expand now that he controls the executive branch unless he is made to face imminent accountability for the violent repression that defined his legacy but has gone unpunished for more than three decades.