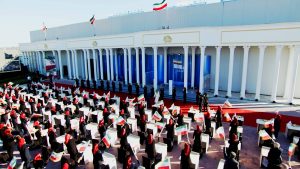 On Saturday, September 5, representatives of more than 300 Iranian communities from around the world announced their support for the uprisings of the Iranian people to overthrow the mullahs’ regime and their support for the main opposition group, the People’s Mojahedin Organization of Iran (PMOI/MEK), and the Resistance Units in an online conference. Participants in the conference, which included three generations of Iranians, called for the immediate intervention of international organizations to free political prisoners in Iran.

The online conference, which coincided with the beginning of the 56th anniversary of the founding of the MEK, was attended by representatives of Iranian communities from all over Europe, the United States, Canada, and Australia. 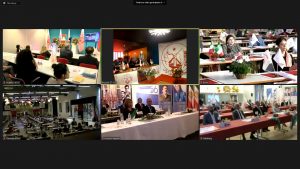 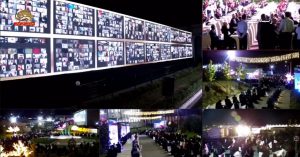 In this program, Iranian communities from all over the world were connected to Ashraf 3, home to thousands of MEK members in Albania.

Badri Pourtabakh, Deputy Secretary-General of the PMOI/MEK started the conference and said: “Our deepest respect and homage to the founders of this organization. They paved a new way in the history of our nation. The way of struggling against dictatorship and fundamentalism. Their names will forever shine in our history.

Our organization proved that the fundamentalists ruling Iran do not represent our nation and people. The PMOI/MEK is the continuation of 120 years of struggle for freedom in Iran. The MEK has stayed true to the tradition of the struggle for freedom and protected its legacy.”

Mrs. Maryam Rajavi, President-elect of the Iranian Resistance, and Ms. Zahra Merrikhi, the Secretary-General of the MEK, were the keynote speakers.

In a part of her speech, Mrs. Rajavi said:

“We honor the great founders of the MEK, Mohammad Hanifnejad, Saeed Mohsen, and Asghar Badizadegan who took the initiative for this historic breakthrough.

“How inspiring it is that Iranian Resistance leader Massoud Rajavi revived and revitalized this organization despite the crushing blows of two dictatorships, leading it to the pinnacle of its struggle against the reactionary mullahs.

“Even today, we see that the clerical regime is admitting it in a thousand different ways that its main problem is the structure of the PMOI/MEK. So, it must be obliterated and beheaded to guarantee the regime’s survival. This is the common goal pursued by all the regime’s mercenaries.

“The uprisings in Iran since December 2017 up until now clearly demonstrate that the protests are the scene of public support for the views and policies of the PMOI/MEK, especially among the younger generation. They are also the venue for the PMOI/MEK to make progress and the place for increasing activities by Resistance Units.

“Today, Iran is plagued with poverty, repression, and the coronavirus pandemic. Socio-economic gaps have never been wider. The suppressive machine does not stop for a moment in protecting the mullahs’ religious fascist regime. The regime’s Judiciary has been handing down a barrage of death sentences.
“Inspired by the sacrifices of thousands of PMOI martyrs, upheavals and rebellions have been sprouting across Iran. Uprisings are on the horizon,
“From Beirut to Basra, to Najaf and Karbala, the clerical regime is in a quagmire. Young people in Beirut chant: They must all leave!
“And the youths in Iraq set fire to the centers and headquarters of the mullahs’ evil regime and their mercenaries and cry out: Iran (regime) must leave!
“Yes, as the PMOI/MEK starts its 56th year of existence, the clerical regime is stuck at an impasse, and in the throes of political, economic, and international crises.
“Khamenei is incapable of offering any change or opening to reduce society’s discontent.
His decision to appoint criminal IRGC officials at the helm of various institutions, including the parliament, does not come from a position of strength, but out of utter weakness. It is an attempt to exert more control over various branches and to prevent the regime’s collapse. Just like Qassem Soleimani, major projects like the JCPOA nuclear agreement and the so-called reformist and moderate government of Rouhani have failed, with nothing remaining of them but lifeless bodies.”

The traditions of the PMOI/MEK, particularly making sacrifice to realize the regime’s overthrow, are guiding the younger generation on the streets. #Iranhttps://t.co/vIAXcF9Qc7 pic.twitter.com/VidloVbAAa

Zahra Merrikhi, the Secretary-General of the MEK, while elaborating on the history of the MEK and its resilience in the past four decades, said:

“It is not without reason that the regime’s leaders constantly warn of the expansion of popular support for the MEK and the role played by the MEK’s Resistance Units in organizing the uprising and the anti-government protests. The mullahs know better than anyone else that they have been defeated in every aspect of the face-off against the MEK, and that the day is not far until the Iranian people will rise up and toppled them. Indeed, the Iranian people and the Resistance, led by the MEK, will overthrow the regime and nothing can prevent that from coming into fruition.”

Zahra Merrikhi, the Secretary-General of the #MEK: The true families of the martyrs and the prisoners are part of this gathering. All of them in one body, in one soul, and with the same resolve. All of us are fighting for Iran’s freedom. #WeSupportMEK https://t.co/3IrKUFP9nX

At this conference, more than 50 representatives of the Iranian communities spoke in support of the MEK and stated that the Iranian people want regime change and the establishment of democracy and freedom in Iran. They also stressed that “supporting the MEK and the MEK’s Resistance Units that have worked hard to change the regime is the national duty of anyone who has a heart for the freedom of Iran.”

The joint statement of Iranian communities around the world read in part:

“During the uprisings of 2017, as well as in November 2019 and January 2020, the Iranian people expressed their desire to overthrow the regime with the slogans” Death to Khamenei, Rouhani “,” Reformist, principlist, the game is over “and” Death to the oppressor, be it the Shah or the leader,”. In the November 2019 uprising alone, the Revolutionary Guards martyred more than 1,500 young people. This is the continuation of 120,000 political executions by the clerical regime. The Iranian people have also openly expressed their opposition to the export of terrorism and incitement to war, with the slogans “Leave Syria, think about us” ‌ and “Neither Gaza nor Lebanon, I sacrifice my life for Iran.” These interventions are part of the regime’s strategy for survival, which costs billions of dollars every year and causes more poverty, unemployment, and inflation among the people, more than half of whom live below the poverty line.”

The statement of the Iranian community concluded that “the ultimate solution to the Iranian crisis is the overthrow of the clerical regime by the Iranian people and the Iranian resistance. The international community must recognize the right of the Iranian people to fight against religious fascism and to establish democracy and the rule of the people in Iran. Supporting the MEK and MEK’s Resistance Units that have worked hard to change the regime is the national duty of anyone who is committed to the freedom of Iran. The ten-point plan of Mrs. Maryam Rajavi, President-elect of the National Council of Resistance, for future Iran, based on a pluralistic republic based on the separation of religion and state, equality of men and women, freedom of expression and belief, equality and rights of all nationalities and followers of all religions and non-nuclear Iran emphasizes the guarantee of democracy in Iran and peace and friendship in the region and the world.”