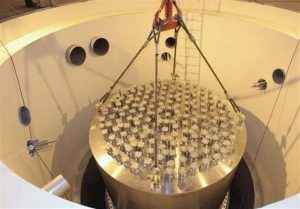 After systematically violating provisions of the Iran nuclear deal in 2019 then completely halting compliance with it at the beginning of 2020, the Iranian regime continued escalatory nuclear activity last week with the announcement that it would be enriching uranium to 60 percent fissile purity. This is far beyond the 20 percent enrichment that has already been established, and many orders of magnitude greater than the 3.65 percent that was permitted under the Joint Comprehensive Plan of Action. The latest provocation serves no practical purpose other than to threaten the international community with a dramatically shorter nuclear breakout time, and it demands a firm response from Western powers.
Of course, a firm response was already warranted by the prior violations, especially considering that they helped to expose Iran’s underlying lack of seriousness regarding implementation and enforcement of the JCPOA. Many of that deal’s critics warned that in the absence of “anytime, anywhere” inspects by international nuclear monitors, Iranian regime authorities were bound to flout the deal and surreptitiously advance some elements of the nuclear program while feigning compliance with the most visible aspects of the 2015 agreement. The US withdrawal from that agreement three years later triggered the Iranian regime to tip its hand and reveal how ineffectual the JCPOA had been from the beginning.

Even some staunch proponents of the agreement were taken aback by how quickly Iran was able to grow its uranium stockpiles and raise its enrichment level back to the 20 percent that it had achieved before preliminary negotiations got underway in 2014.
In November 2019, two months before the regime announced it would no longer be abiding by the terms of the agreement, Ali Akbar Salehi, the head of the Atomic Energy Organization of Iran, gave an interview to Iranian state media in which he boasted of avoiding an “enrichment deadlock” by deceiving the international community into believing that it had adopted restrictions that would be difficult to reverse. His remarks mocked the surprise that had been expressed in the wake of Iran’s dramatic scaling-up, and it effectively confirmed that the regime had always been planning to violate the relevant provisions.
“There was an issue of uranium enrichment in nuclear talks with the P5+1 countries, and they told us that the enrichment should be in that way, and we accepted,” Salehi said. “They thought that they won the negotiation. But – I could not explain this at that time – we had a countermeasure, and while we proceeded with the case, they didn’t achieve what they planned for.”

By the time Salehi delivered these remarks, his acknowledgment of deception should not have come as a surprise to any Western official, much less to those directly tasked with handling the nuclear file. Several months earlier, in January 2019, Salehi had already made a similar admission with regard to a potential plutonium pathway to a nuclear weapon. In that case, he praised the authorities at the Arak heavy water plant for pouring cement into a decoy system of tubes, in order to give the impression that Iran had complied with a provision demanding that the core of that facility be deactivated, converting it into a light water plant that would not yield the same plutonium byproduct.
Salehi attempted to justify the action by saying it was based on the assumption that “the other party would go against their word one day.” He strongly implied that orders to deceive the international community came directly from Iranian regime Supreme Leader Ali Khamenei. The word of that clerical ruler cannot be questioned under Iran’s theocratic system, and if his secret ambition was to preserve or expand upon Iran’s pre-existing nuclear achievements, then no amount of negotiation with lower authorities could have hoped to change that.

Of course, this remains the case today, but some Western policymakers seemingly remain convinced that Khamenei, in particular, is averse to the problems associated with nuclear weapons development. These tacit defenders of the Iranian position are often keen to cite a fatwa that the supreme leader once issued, which declared weapons of mass destruction to be contrary to Islam and thus taboo for the Iranian regime.
The validity of that fatwa has been called into question many times over the years by individual experts on Iranian affairs and by the National Council of Resistance of Iran. They have pointed out that even if the edict was meant to be enforced, it would not prevent Iran from taking incremental steps toward nuclear weapons capability before poising itself to “break out” in an instant at some later date. Experts also emphasize that the signal for that breakout could come in the form of the revocation of Khamenei’s fatwa, which could be made as easily as was its issuance.
“Incremental steps” are precisely what Iran has always been accused of taking, with long-term malicious intent. With the announcement of 60 percent uranium enrichment, it became as clear as ever that the regime remains committed to the “breakout” strategy. That level of enrichment is far more than is needed for any of the civilian activities that Khamenei and his subordinates publicly insist are the only objectives for the nuclear program. Its only feasible purpose is to threaten the international community with the prospect of a nuclear Iran, and unless Western powers respond firmly, that prospect could very easily turn to reality.
Tehran is aware of this, and it has tried to stave off the consequences of its provocations by proclaiming that those consequences would only yield more of the same. In February, Intelligence Minister Mahmoud Alavi attempted to rehabilitate the image of Khamenei’s fatwa while simultaneously underscoring that it would not prevent the Iranian regime from aggressively pursuing nuclear weapons capability. “The fatwa forbids the production of nuclear weapons,” he said, “but if they push Iran in those directions, it is not Iran’s fault. Those who pushed Iran in that direction will be to blame.”

This is, of course, nonsense. The Iranian regime cannot reject nuclear weapons and yet still be pushed in the direction of acquiring them. Western governments must therefore emphasize, above all else, that if the Iranian regime did not intend to become a nuclear power, then none of the issues surrounding the JCPOA would have been relevant to its decisions.
Iran’s position regarding its nuclear program has never been credible, and with each successive escalation, it becomes less credible. If the preexisting weaknesses in the JCPOA were not sufficient grounds for going back to the drawing board and opening negotiations with much stricter demands for the Iranian side, then the regime’s ongoing provocative behavior should be. It is time for European defenders of the nuclear deal to reevaluate their approach and to prioritize holding Tehran accountable.

Previous articleIran: State-Run Media Underline the Possibility of Another Uprising
Next articleIran: COVID-19 Takes the Lives of at Least 257,600 in 539 Cities