Official Warns of Riots Triggered by Regime’s Crackdown on Women Hossein Mousavi Tabrizi, a state-affiliated cleric in the Qom seminary warned that cracking down on the hijab issue might backfire in society and lead to riots.

On July 24, Tabrizi told the Mostaghel daily: “Playing with the hijab issue, canceling a concert in Ahvaz by several vans, in addition to the unbridled high prices, this all means trying to combine the crises of 2009 and 2019, which means merging the dissatisfaction of the middle class with the underprivileged classes! Given the continuation of these kinds of encounters (the crackdown by the moral police), are we going to witness the rebellion of the middle and weak class of society?”

“Having said that, we will definitely witness these riots,” Tabrizi warned. “Officials should pay attention and stop these behaviors. The people have become aggressive because of the skyrocketing prices, so the officials should be cautious. It is better not to put pressure on the people on other issues while the country is facing serious problems.”

According to the information posted on social media and some state media, many areas of Tehran experienced internet outages on July 25.

A state-run Telegram group called ‘Tehran Today‘ announced: “This morning, the country’s network suffered from a disruption, which was due to a power outage in the infrastructure LCT building, which occurred from 8:15 to 8:50. During these hours and after that, many subscribers were facing disruption of their internet services.

⚠️ Confirmed: Network data show a significant outage in #Iran with high impact to Tehran; metrics indicate collapse of observable connectivity to 52% of ordinary levels prior to restoration this morning; authorities attribute the incident to a power cut at the TIC building 📉 pic.twitter.com/YrLqoNFxGs

Precedent has shown that the state purposely shuts or slows down the internet for certain political or security reasons and even some outlets have been speculating that the constant network outages in Iran are rooted in a gradual implementation of the regime’s plan to shut down the internet, enforcing the so-called ‘internet users protection bill’. Following three days of flooding in the Estahban region in Fars province, the clerical regime announced that 32 people have died. Mehdi Valipour, the head of the regime’s Relief and Rescue Organization, announced that the last missing body was found.

Calling an end to the search for the missing people in the floods, he said: “Minutes ago and after 75 hours, the body of the last missing person from the Estehban flooding was found. The bodies of all 32 people missing were found and handed over on Friday in the Rudbal area of Estehban.”

Mehdi Khobyar, the deputy of the Red Crescent Society of Fars Province, told the state-run Mehr news agency: “This morning, according to a report about missing individuals, the body of a one-and-a-half-year-old girl was found.” Amid unusual floods in the central Fars province and while many other parts of the country are suffering from water shortages, some news reports indicate that the Iranian regime’s claims that blame the weather and the drought are baseless.

“Monsoon rains flow a considerable amount of water in Sistan and Baluchistan province; a unique blessing of which a significant part either goes out of the country’s borders or falls into the sea, and the extracted part that goes into the dams also remains almost unused and evaporates,” the Tasnim news agency wrote on July 21. 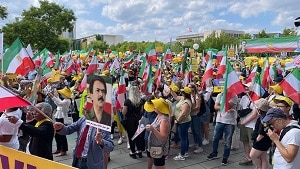 Mrs. Maryam Rajavi, President-elect of the Iranian opposition coalition National Council of Resistance of Iran (NCRI), asked a massive crowd of freedom-loving Iranians rallying in Berlin on Saturday, July 23: “What have you done that the mullahs’ regime is so furious about the Iranian Resistance?!”

The thousands of NCRI supporters gathered in Berlin to hold their rally coinciding with the annual Iranian Resistance convention is a clear signal of the turbulent status quo in Iran. As the ruling regime seeks to keep a lid on the country’s restive population through an iron fist and nationwide crackdown, the Iranian nation continues to rise against the mullahs’ tyranny and oppression. 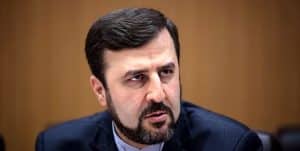 On July 22, the Iranian regime’s deputy for international affairs and human rights Kazem Gharibabadi threatened the government of Sweden over the sentencing of life imprisonment of Hamid Noury, a former Iranian prison guard and perpetrator of the 1988 massacre.

In an interview with the state TV news channel (IRNN), Gharibabadi said: “You cannot arrest and put innocent Iranian citizens on trial, harbor terrorist groups, freeze Iran’s assets and then make its release subject to releasing criminals and convicted felons in Iran, but accuse Iran of hostage-taking.”

“In response to Sweden’s illegal action in trying Hamid Noury and sentencing him to life imprisonment, as well as the country’s public support for terrorist groups, Iran will not stand idle by and it has various options available,” he added. 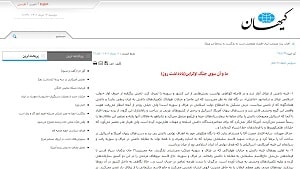 The Kayhan newspaper, whose editorial guidelines are directed by the regime’s Supreme Leader Ali Khamenei’s office, officially and publically announced the regime’s support of the invasion of Ukraine.

In a column published on July 24, Kayhan editor-in-chief Hossein Shariatmadari wrote: “The statements of the Supreme Leader of the revolution in the meeting with Putin indicated that Iran is aware of the reality behind the war in Ukraine and that it is closely monitoring NATO’s actions in the region. Since Iran knows that if the United States achieves victory in Ukraine, Iran will be one of the next and the most important targets, it considers Russia’s confrontation with the United States and NATO in Ukraine, as part of its own security and therefore it logically and naturally supports the confrontation.” 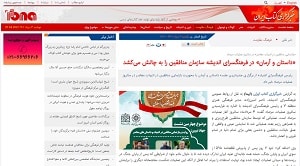 On the eve of the anniversary of the NLA military campaign in 1988, called ‘Operation Eternal Light’, Iranian state media and officials are desperately trying to spread disinformation and defame the MEK to scare off the new generation and prevent public hatred to become new energy of the organized resistance.

Among dozens of other statements and reports these days, the state-run news agency IBNA wrote on July 24: “Today, while more than 3 decades have passed since the end of the Iran-Iraq war, the Mojahedin Organization (MEK) is trying to hide its dark record from the young generation, who are less informed about the terrorist and inhumane actions of this group. But the media and our cultural and propagandist agencies are obliged to not allow this sinister act to happen.”

Quoting Nasser Aminzadeh, a so-called cultural agency official, IBNA added: “Authoring books, producing documentaries and movies, holding conferences and explanatory lectures, and giving the stage to (state-loyal) professors are among the important measures that should be taken to address this important issue. Let’s not forget that the media apparatus of the hypocrites (the regime’s description to smear the MEK) is active around the clock and it is trying to divert the minds and ears of the young Iranian generation to their desired agenda.”

Previous article
Public Hanging of Political Prisoner, Iman Sabzikar, in Shiraz
Next article
Iran: 11 Hanged in One Day in Zahedan, Zabul, Qom, and Shiraz 54 Executed in One Month