Iran: Ebrahim Raisi, the henchman of the 1988 massacre of political prisoners, has become the regime’s President

Iran: Ebrahim Raisi, the henchman of the 1988 massacre of political prisoners, has become the regime's President#RaisiMassMurderer #Iran pic.twitter.com/1tXz0v7wuq

Iran: Ebrahim Raisi must be investigated for crimes against humanity 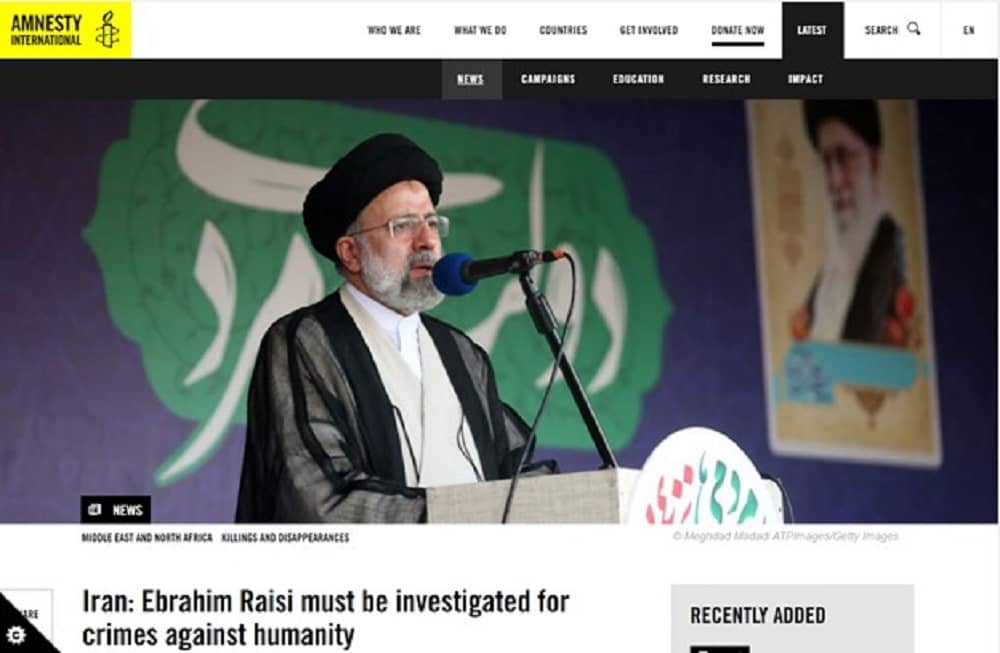 “That Ebrahim Raisi has risen to the presidency instead of being investigated for the crimes against humanity of murder, enforced disappearance and torture, is a grim reminder that impunity reigns supreme in Iran. In 2018, our organization documented how Ebrahim Raisi had been a member of the ‘death commission’ which forcibly disappeared and extrajudicially executed in secret thousands of political dissidents in Evin and Gohardasht prisons near Tehran in 1988. The circumstances surrounding the fate of the victims and the whereabouts of their bodies are, to this day, systematically concealed by the Iranian authorities, amounting to ongoing crimes against humanity.

As Head of the Iranian Judiciary, Ebrahim Raisi has presided over a spiralling crackdown on human rights which has seen hundreds of peaceful dissidents, human rights defenders and members of persecuted minority groups arbitrarily detained. https://t.co/Ry0F3vIkql 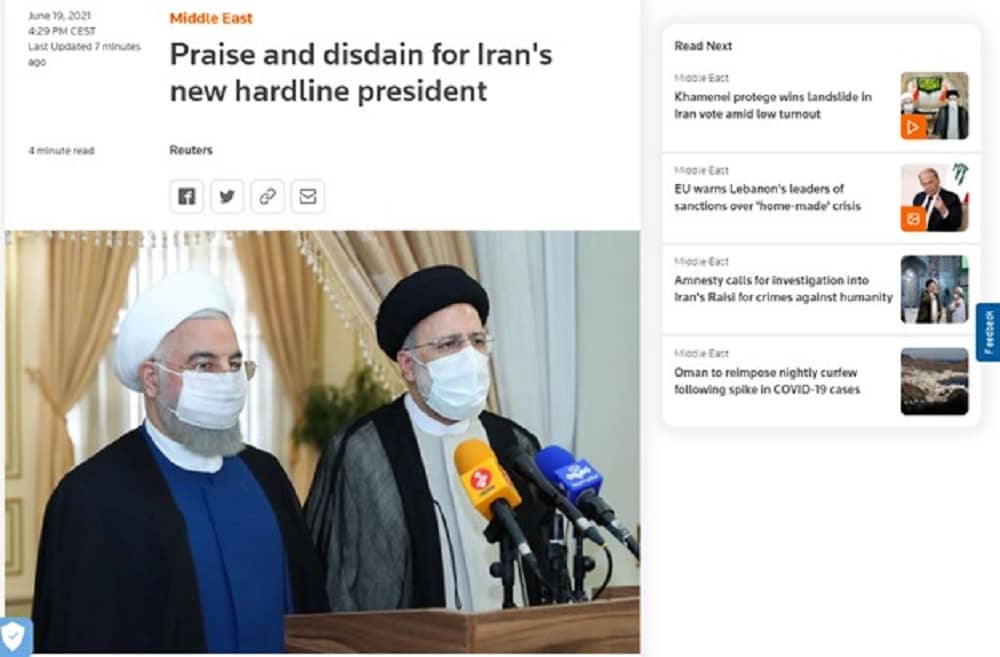 June 19 (Reuters) – Following are some world reactions to the election of Ebrahim Raisi as president of Iran. Raisi, 60, is a hardline judge who is loyal to Supreme Leader Ayatollah Ali Khamenei and subject to U.S. sanctions for alleged human rights abuses

MARYAM RAJAVI, PRESIDENT-ELECT OF THE PARIS-BASED NATIONAL COUNCIL OF RESISTANCE OF IRAN

“Ebrahim Raisi, the henchman of the 1988 massacre and murderer of the Mujahedin-e Khalq (PMOI/MEK), is Khamenei’s final bid to preserve his regime. Weak, crisis-riddled, and rattled by looming uprisings, Khamenei purged all rivals to install Raisi as president, one of the vilest criminals against humanity since World War II.”
Read more

The Iranian regime will soon install a hardline president in a rigged election. All 3 candidates were pre-approved by Supreme Leader Khamenei. Frontrunner Ebrahim Raisi is a hardline mullah who ordered mass executions of political prisoners. https://t.co/ClxybEqjWo

Maryam Rajavi, the leader of the National Council of Resistance of Iran (NCRI), said the ‘nationwide boycott’ was the ‘greatest political and social blow’ to the system led by supreme leader Ayatollah Ali Khamenei.
‘The boycott proved and showed the world that the Iranian people’s only vote is to overthrow this mediaeval regime,’ she was quoted by the NCRI as saying.

The People’s Mujahedin Organisation of Iran (MEK/PMOI) whose political wing is the NCRI believe the actual turnout was 10 percent and the authorities have inflated it by a factor of five in an ‘astronomical fabrication’, the NCRI said.

Their assessment was based on reports of 1,200 witnesses from 400 cities in Iran and more than 3,500 video clips from polling stations, it said, without indicating how the figure had been calculated or giving further proof.
Read more 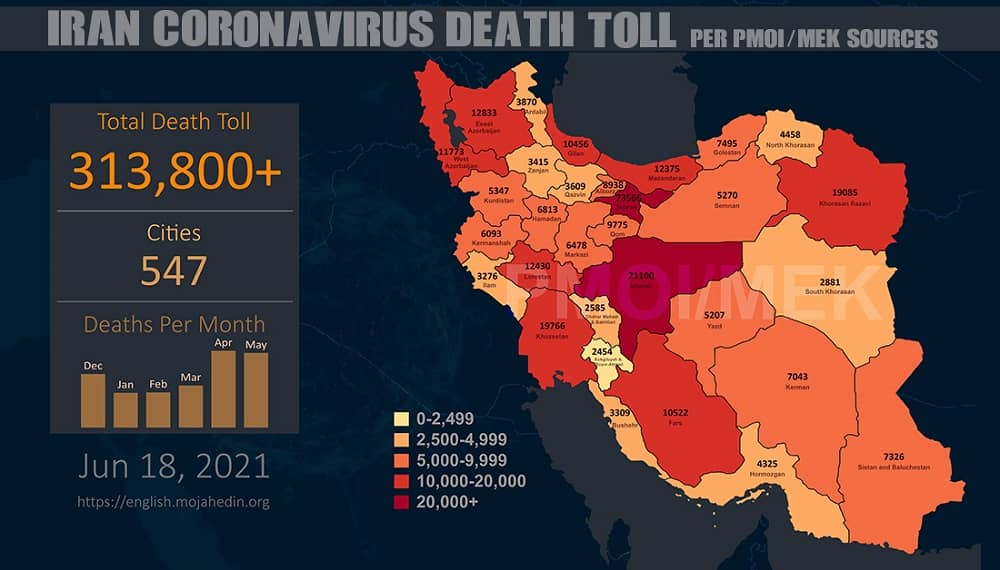 The People’s Mojahedin Organization of Iran (PMOI/MEK) announced on Friday that over 313,800 people have died of the novel coronavirus in 547 cities checkered across all of Iran’s 31 provinces, according to reports tallied by the Iranian opposition People’s Mojahedin Organization of Iran (PMOI/MEK) as of Friday afternoon local time, June 18. The official death toll declared by the regime stands at 82,619, around a fourth of the actual figure.

More than 313,800 people have died of the novel #coronavirus in 547 cities checkered across all of Iran's 31 provinces, according to the Iranian opposition PMOI/MEK.

Maryam Rajavi: A Historic Congratulation to the Iranian People for the Nationwide Boycott of the Mullahs’ Sham Election. 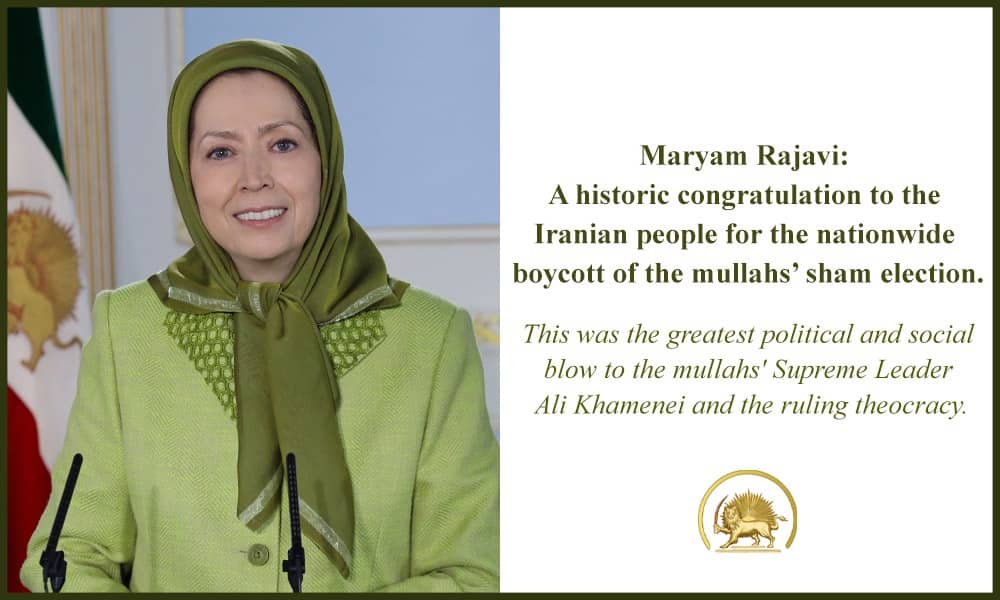 This was the greatest political and social blow to the mullahs’ Supreme Leader Ali Khamenei and the ruling theocracy. The boycott proved and showed the world that the Iranian people’s only vote is to overthrow this medieval regime. The nationwide boycott is the groundswell of the martyrs’ sacrifices and is a reflection of the Iranian people’s great campaign for justice.

Polling stations opened across Iran on Friday for the latest round of the sham presidential election. The election is being held after weeks of tensions among regime officials and a widespread popular campaign to boycott the elections. The leading candidate in the race is Ebrahim Raisi, a notorious executioner. Raisi, the favored candidate of supreme leader Ali Khamenei, played a key role in the 1988 massacre of more than 30,000 political prisoners. In recent years, as the chief of the judiciary branch, he has overseen the execution of dissidents and torture of protesters in Iran’s prisons. He has been sanctioned by the U.S. for his role in egregious human rights abuses. 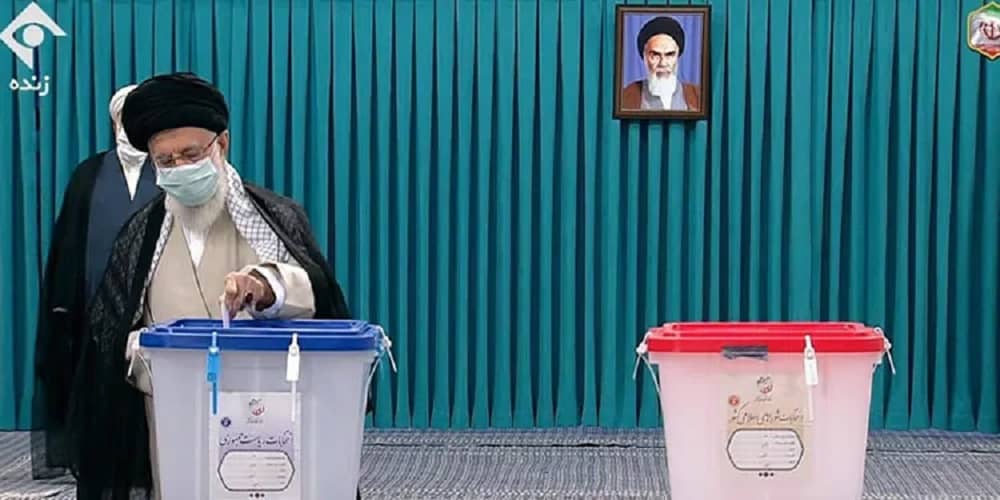 Thousands of reports and amateur videos of empty polling stations indicated that Iranians across the country boycotted the presidential elections today. However, state-run media reported a high voter turnout in Iran, although final figures have yet to be announced.

In London as well as other world capitals, Iranians joined their fellow countrymen and women in condemning the presidential sham elections in their country and called upon the world leaders to denounce the continuing dictatorship in Tehran.

NCRI & MEK supporters hold rally outside regime's embassy in #London in support of the Iranian people who overwhelmingly #BoycottIranShamElections reiterating that the real popular vote in #Iran is to overthrow the regime #راى_من_سرنگونى & to bring to justice #RaisiMassMurderer pic.twitter.com/jCZjcuXGaB 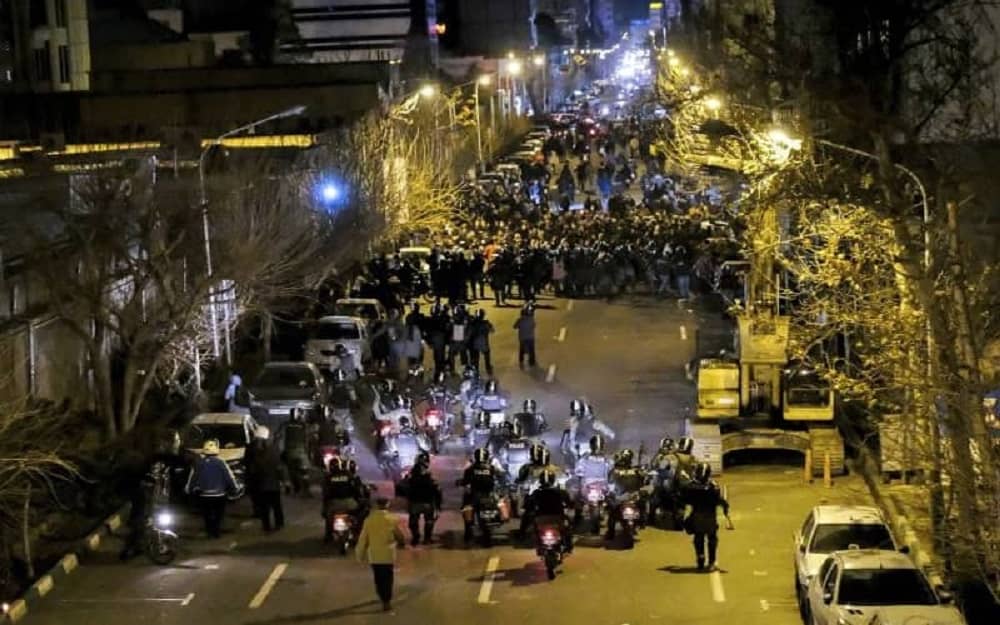 All the evidence show that the Iranian government is fearing the situation badly, despite their claims to having everything under control, but the international situation is against this regime, and in the Middle East people of countries like Lebanon and Iraq who are suffering many years from the regime’s terror acts and meddling are chanting and protesting it. And more important it is fearing the unstable and critical situation in the country, facing angry people which this time having nothing more to lose and are becoming ready to face the regime.