We are in anticipation of the arrival of Spring of freedom, heralding health and well-being across #Iran, in all cities, villages, and to our people, we salute #Nowruz. #FreeIran pic.twitter.com/z08IDXyeLC

On Nowruz, Iranians celebrate the memory of the heroes fallen for freedom 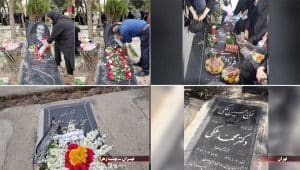 As the Persian year comes to a close, people across Iran are paying homage to the countless heroes who have laid their lives down to bring freedom and democracy in Iran.

In Tehran, Resistance Units, activists and supporters of the People’s Mojahedin Organization of Iran (PMOI/MEK), commemorated the founders of the MEK by laying flowers on their graves in Behesht-e Zahra cemetery.

The founders of the MEK, Mohammad Hanif Nejad, Ali Asghar Badizadegan, and Saied Mohsen, were executed by the Shah regime in 1972 after undergoing severe torture in the prisons of the SAVAK, the Shah regime’s intelligence arm. The Shah regime gave them the choice to reduce their sentence from death to life in prison if they denounced their struggle for freedom. All three refused to bend to the Shah regime’s will. Their sacrifice has set an example for generations of MEK members and supporters, who continue their path and struggle to this day.

As the Persian year comes to a close, people across #Iran are paying homage to the countless heroes who have laid their lives down to bring freedom and democracy in Iran.#Nowruzhttps://t.co/Tbv7ho4Uah 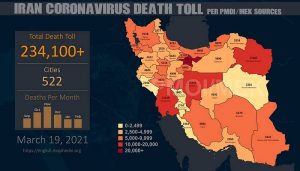 More than 234,100 people have died of the novel #coronavirus in 522 cities checkered across all of Iran's 31 provinces, according to the Iranian opposition PMOI/MEK.

Previous articleCoronavirus Disaster in 522 Cities in Iran Takes the Lives of 234,100
Next articleMaryam Rajavis’s Speech on the Advent of Persian New Year 1400