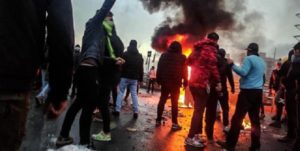 The Anniversary of November 2019 Uprising: 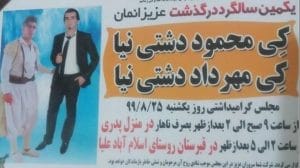 On the eve of the first anniversary of Iran’s November 2019 uprising, people in Iran and across the world are commemorating the biggest nationwide protests since the 1979 revolution and the 1,500 innocent victims who lost their lives to the brutality of the Iranian regime’s security forces.

In Behbehan, Khuzestan province, social media users have published posts and called for a ceremony on Sunday to honor Mehrdad and Mahmoud Dashtinia, two martyrs of the November 2019 protests. 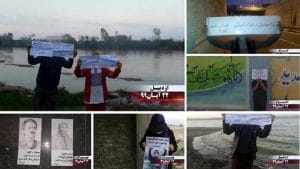 In recent weeks, the Resistance Units, the People’s Mojahedin Organization of Iran (PMOI/MEK) network inside Iran, organized various anti-regime campaigns across the country marking the first anniversary of Iran’s nationwide uprising in November 2019.

On Thursday, November 12, the Iranian Resistance Units took to graffiti in major cities including Tehran, Mashhad, Tabriz, Ahvaz, Ardabil, Karaj, and Kermanshah, writing slogans: “Be prepared for the anniversary of the November 2019 uprising,” “The November uprising continues,” “The mullahs must fear, a revolt and an uprising are approaching,” “We remember the martyrs fallen for freedom during November 2019 protests,” and “Rise up to overthrow the regime of the Supreme Leader.”

The family of Pezhman Qolipour held a memorial at his gravesite on the of the November 2019 uprising. Pezhman was shot and killed by security forces last year.

Behbahan, SW Iran: The regime is gearing up for the anniversary of Nov. 2019 IranProtests in the restive city. Video shows the regime’s forces installing additional cameras on the streets to identify protesters. Several protesters were shot and killed last year in Behbahan.

Behbahan, SW #Iran
The regime is gearing up for the anniversary of Nov. 2019 #IranProtests in the restive city. Video shows the regime's forces installing additional cameras on the streets to identify protesters. Several protesters were shot and killed last year in Behbahan. pic.twitter.com/xqHVZvuivZ 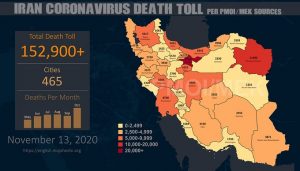 More than 152,900 people have died of the novel #coronavirus in 465 cities checkered across all of Iran's 31 provinces, according to the Iranian opposition PMOI/MEK.

Maryam Rajavi: The time is up for policies that stand with the mullahs. This policy would only reap harm and loss.

The mullahs have no options for breaking out of the overthrow predicament. The time has come to overthrow the mullahs’ religious dictatorship.

16 November marks one year since Iran's #BloodyNovember, when security forces killed hundreds of men, women and children during nationwide protests.

On Monday, @Amnesty launches a new microsite documenting how the lethal crackdown was hidden from the world.

Previous article
Iran: Coronavirus Death Toll Surpasses 152,900 in 465 Cities
Next article
One Year After Massive Uprising, the Collapse of Iran’s Regime is Well Within Reach